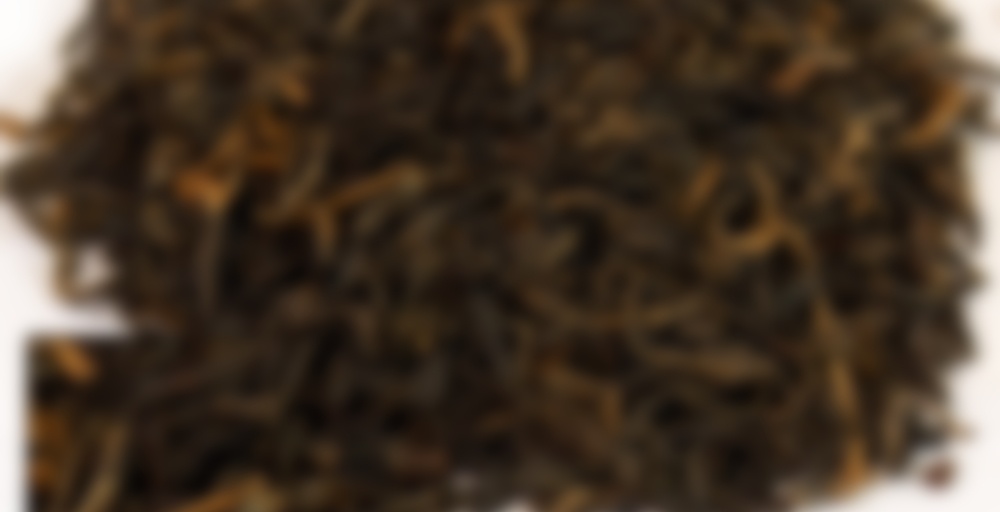 Yunnan, known as the birthplace of tea, is a province in southwestern China that borders Vietnam, Burma, and Laos. Yunnan translates literally to “south of the clouds”. Its diverse landscape offers everything from tropical rainforests to mountainous terrain and is home to a wide variety of plant species. The Yunnan region focuses heavily on agricultural production.

Yunnan leaves are most distinctive in appearance, with their fat buds and thick leaves. The black, golden, tippy leaves of this Imperial Yunnan Black tea brew to a lovely amber cup, with a rich, full-body and a slightly spicy aftertaste.

I’ve had this one a few times, but even with a heaping teaspoon for a mug, the flavor ends up too bitey and astringent so I wanted to try with a flat teaspoon to see what would happen. Much better. A flat teaspoon is best! The leaves of this Yunnan are smaller sized with multiple brown colors, no gold — almost seems more like an Assam in both the look of the leaf and the flavor. It’s dark and crisp yet has that “juicy”, thirst quenching quality that only Assam has for me. It’s dusky and malty with hints of fruit… possibly cherry. A typical Yunnan to me is chocolate, honey, sweet potato and this is a very different tea than those flavor notes. I don’t taste any of those with this one! BUT the color of the brew DID remind me of milk chocolate. If only there were chocolate notes to this one… it would be wonderful to have a naturally tasting chocolate & cherries tea! So this isn’t your typical Yunnan, but delicious and hits that robust black tea craving.
Steep #1 // 1 teaspoon for a full mug// 10 minutes after boiling // 3 minute steep
Steep #2 // just boiled // 3-4 minute steep

Not sure if I’ve had this but I love Simpson and Vail teas in general. They sell good stuff.

Laoshan Roasted Oolong by Verdant is ridiculously choc-cherry tasting and completely natural! One of my top teas ever.

It will be interesting to see what this tastes like, as it has been living in its paper sample bag in a plastic container along with other Simpson & Vails, some of which are florals, in their paper sample bags.

The dry leaves are small and medium in the tippy and curly department. They smell a little perfumey, which scares me some.

The tea steeps dark, darker than I’ve seen in most yunnans. A clear, dark mahogany. The aroma is malty-deep, slightly sweet, with just a hint of pepper. The perfume smell doesn’t carry over into the aroma, fortunately.

The flavor is surprisingly mild given the dark color and smell, but flavorful. Gentle on the stomach. There’s just the smallest amount of perfume carry-over, but not enough to give the tea an altogether different flavor from what it is. It’s not the best yunnan I’ve had, solid, but not overly interesting. It sort of reminds me of the Numi Chinese Breakfast.

I suspect I’ll sip this one down easily and quickly, both because it’s a pleasant drink and because with all the other yunnans in my cupboard that I prefer to this one, I’d rather sip down this one as a distraction from focusing on the others.

Now for the life update. No need to read if you’re in this for the tea. ;-)

Sorry I’ve been rather scarce. I’m still getting a feel for the new routine. I’ve been doing coffee first thing in the morning for the extra alertness jolt with fast preparation time, taking tea with me in the Timolino, typically a green of some sort, and always one I’ve written about before and so far there hasn’t been much to add by way of notes.

There is tea at work, by the way. There’s a full Starbucks in one of the campus buildings, and a variety of bagged Numi teas in the kitchen on my floor. I also brought some tea to work. Essentially all the bags I have left. I haven’t actually steeped any yet though. I’ve been occupied with trying to learn everything there is to learn which makes the time fly and before I know it, the day is gone and I haven’t made any tea at work again.

On the home de-cluttering front: continued success! This morning I packed up five boxes for storage, mostly my old toys I’d saved from childhood for the kids that they’ve outgrown and the toys they have sentimental attachment to but don’t play with anymore. With that, the toy project is pretty much done except for the random things that continue to turn up in weird places. I can pretty much be assured to find at least one Lego in every drawer in the house if I look hard enough. ;-)

So to recap: toys are done, office is done. What’s left? Books and clothes, mostly.

Last weekend we took some books to the library to donate. They don’t put them in the library but they sell them for fundraising. There will probably be another box or two of these coming as I finish going through the kids’ books with them, but there aren’t too many left to go through. Then there will be are a few boxes of books to store—baby favorites that they don’t want to let go but don’t look at much anymore.

The book project was pretty amusing. Who knew we had five copies of Goodnight Moon, until we looked through everything?

I’m hoping to finish some of this packing up this weekend, but I’m not going to stress about it. As long as I continue to see progress, I think I can keep motivated to finish.

The one thing that has suffered in all of this is my writing. I have several stories I’ve workshopped and need to revise, and some stories that have been sent back from magazines that need to be resubmitted. Maybe I’ll be able to make an hour or two tomorrow to work on my Writers of the Future entry for this quarter. According to my readers it only needs some minor revision, so if I can get it revised, I can set it aside until next weekend, do a reread, and submit if I can’t think of anything else to do to it.

Might have to give this a try! Also, you’ve inspired me to grab a couple bags of my Numi Chinese Breakfast when I get home later! :)

That is interesting, Jim. Can you say more about that?

It’s a terroir thing. Since the tea is all grown in very similar areas and conditions, you can, so to speak, as in a scientific study, “isolate” those variables and put teas side by side and start to get a sense of how different types of processing affect tea taste independent of different leaf. I have a recent tasting note… somewhere in here… where I talk about the leaf I’m drinking tasting like “proto-sheng”. Many of the notes of sheng are there, without the aging having begun to impact them, yet.