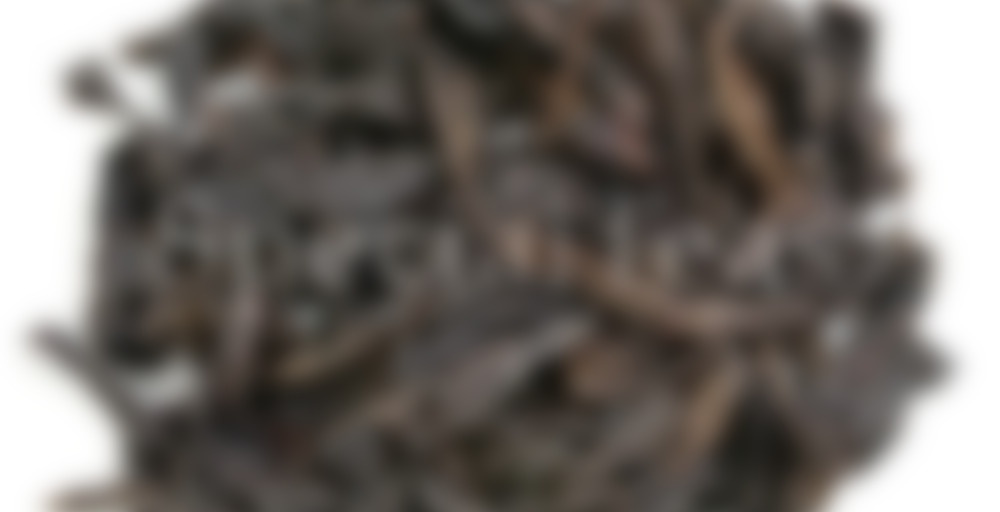 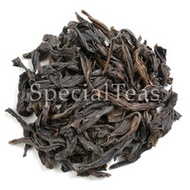 Experience a tea with an amazing history. Grown in the Phoenix Mountains of the Chinese Guangdong Province, this Oolong has been entirely handmade for over 700 years – since the Ming Dynasty, long before tea was introduced to the Western World. It is grown on ancient, un-pruned tea trees, and can be harvested only with the use of ladders. Carefully smelling a handful of the long, dark leaves reveals a broad pallet of fragrances, ranging from woody to toasty, to a most unusual, sweet fruitiness. The golden-amber infusion has a complex yet delicate, toasty-fruity aroma and flavor.

Many thanks to Mercuryhime for this sample! This is a very special tea indeed. I gave most of this cup and its subsequent infusions to my new husband. It’s so unique! He needed to try it.

He described it as, “It’s got that weird tongue thing again…like the tea is trying to get away from my tongue and escape.”

“Okay, you’re describing the mouthfeel. But what about the flavor?” I asked.

“It tastes like brown construction paper. I like it,” he replied. LOL! Who describes a tea as tasting like paper and then likes it? “I know,” he continued, “It tastes brassy! Yeah, like I’m licking a doorknob.”

I laughed at him and then he said, “I think people would really like to read my tasting notes. I’m the best at tasting notes. You’re jealous.” :) Aww, he’s so adorable! I love my hubby. Maybe he’ll join Steepster and track his own tea journey. You never know!

If he decides to join Steepster, I want to know. His description of this tea is quite unique. :)

If that’s how he writes tasting notes then I would definitely like to read them. :D Glad the sample I sent provided some bonding time.

haha love it! that’s the thing i like about everyone’s tasting notes. they’re all different and none of them are wrong! it’s fun to read how people experience things

LOL! Thanks all. His response to reading your comments was, “Told you! I’m the greatest!” Hahaha! ;)

D’awwwww that’s cute and hilarious! :D I wish my boyfriend would do something other than tell me that it “smells like tea” and wrinkle his nose at me. Although tonight, he chided me for leaving an infuser in my cup after the timer went (it was rooibos, but he doesn’t have a clue what that means), and I said he could take it out… he did and said “that was fun! No, not really. I’m just trying to be involved in your addiction.” Le sigh.

Awww! Well, at least there’s no risk of him drinking your favorite teas. :P

That’s true. He wouldn’t even know what to do with them…

Again another moment of silence for a company that is missed by the tea loving community. Every tea that I have from SpecialTeas is always fabulous. Thank you Mercuryhime for this one. I have a high liking for dark oolongs they definitely have their own unique characteristics. The dry leaf has a woodsy aroma to it. When I was putting the water in with the dry leaf I noticed a sweet cranberry honey like aroma. That lovely aroma transfers into the cup. Hints of honey, cranberry, bing cherry, maybe even a little bit of grapefruit hits the palette. However I what I find odd about this tea is it’s ninja like camouflage skills. The dry leaf is a dark brown but add hot water and you the green. A great oolong though. Ahhh SpecialTeas if only I had found you sooner(sigh).

I only regret not buying more when they had their going out of business sale. They didn’t advertise that they were going out of business and I didn’t need more tea at the time so I just let the 75% deals pass me by. Then, a long while later, they were still selling stuff at 75% off, and I asked myself, “how can a company have such an outrageous sale for such a long time and still stay in business?” Then it hit me, and I bought what they had left that sounded good. Unfortunately, not much good stuff was left by then. sad. :(

anyway, I’m glad you like this. I actually have another 2 oz bag that’s still sealed. good old sale…haha I’m not too fond of dark oolongs so let me know if you’re interested in more of this.

Special thanks to Mercuryhime for this one! I really like it! :)

It’s nice malty-darker oolong with super sweet notes and hints of toasty/roasty/nutty fruit-like hints! There is a honey-like end-sip to it too!

Very nice!
I’m glad Mercuryhime tried this and enjoyed it but also shared some with me! I enjoyed it very much! :)

Well! I am just surprised! I think I’m actually enjoying this despite the fact that it’s a darker oolong. At first, it seemed like your typical toasty woodsy oxidized oolong. Yawn. I put the cup down and went about a few chores. I came back and took a sip. Then something amazing happened. I liked it. When I cooled down, there was a strong honey note behind the toasted grains and oxidized tea leaf. It’s a perfect fall tea. Very enjoyable. I think I’ll cold brew this and see what happens. :)

I’ll have to thank TeaEqualsBliss here for being the catalyst that caused me to unseal this bag. It had remained unopened for about a year patiently awaiting the day that I would take notice. Then TeaEqualsBliss asked for some of it in a swap and so the bag was unsealed. Then, well…since I had the bag open anyway, I thought I’d give it a try. And here we are today.

Edit: The honeyed notes disappeared after the first two steeps so I’m decreasing the rating a bit. It turns quite ordinary towards the end. Good for an everything tea. Except that I have so many samples of awesome tea that my everyday teas are usually high quality stuff.

This oolong was my favorite till I bought #40 from Adagio. Love the flavor. It was my awakening to oolong. Nutty and woody notes.