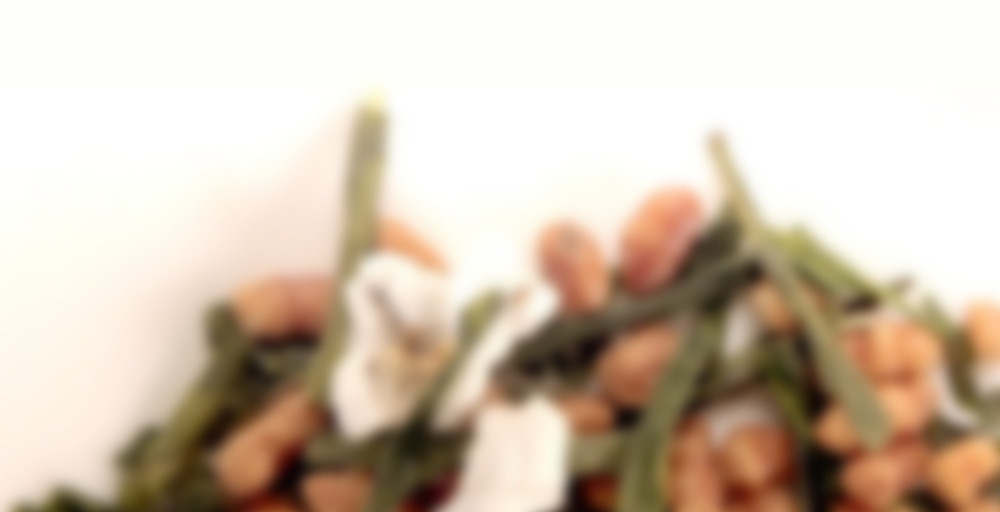 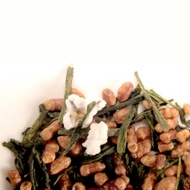 A classic Japanese blend of green tea, roasted and partially puffed rice with a “toasty” flavor and aroma.

This is a sample in a tea bag that I got with a Tavalon order a while back. I didn’t pick it, it just showed up.

The bag looks like a little evening bag. It has a string that attaches in two places rather than one, so it looks like a little gauzy pocketbook. The bag itself looks scarily like a bandage. On the plus side, it has an opening that is folded over, and if you feel curious you can peek inside and see the tea rather than having to hold it up to the light to get a feel for what the tea looks like.

This genmai cha has more “popped kernals” than others I’ve had. It really does have a popcorny look about it, and I should know, having just eaten a bag at Toy Story 3 last night. (Great movie, by the way. Enjoyed it at least as much as my kids did.)

I’m having this at work, and yes, I did forget to bring a thermometer yet again. I have a mental block about it, I think. I figure the water quality is going to suck anyway, so trying to control for other variables isn’t going to make the brewing conditions perfect no matter what I do.

The tea’s aroma is curiously sweet, giving the tea an almost kettle corny smell. Almost. I don’t mean to suggest it’s bordering on cracker jacks by any stretch.

It has the expected toasty rice flavor over a mild, slightly buttery green tea. It’s not as toasty and nutty as some other genmai cha’s I’ve had, but it has more tea flavor than some others.

I suspect I’m going to settle in on Den’s as my genmai cha provider of choice with an occasional dip into others like the Samovar Ryokucha, but I’m glad I got a chance to try this.

Drank a whole pot of this wonderfully nutty stuff tonight. Where did fall go? It’s freeze here in New Jersey.

This tea surprised me with how good it was.

I hope fall comes back to you! It finally got chilly here, which is a much welcome climate change for me, but I don’t think I’m ready for anything below the mid fifties quite yet.

This weirded me out with the puffed rice mixed in with the tea, but it was a really complex, nutty flavor. Nice for a cold, gray, Fall afternoon.

I have not had genmacha since college when my Japanese room mate introduced me to it. It was one of my favourite before I discovered the joys of coffee.

You might think it would be weird to drink a big cup of steaming popcorn.

But you’d be wrong.

Tried it iced. The flavor remains pretty constant regardless if it’s iced or hot.

So astringent that I wanted to get a cotton ball and use it as a facial toner.

Bear With Me
Delete

Well I just nearly shot tea out of my nose! Haha!

Was the water maybe a bit too hot? Or was it just a crappy genmaicha?

Do you have a Chinatown close to you? They’re usually a good source for greens and genmaichas that are cheap but tasty :)

I think I must just have a really low tolerance for astringency. I have two other greens from Tavalon tea (I got a tea of the month subscription as a gift) that I really like. The only other genmaicha that I ever tried was The Republic of Tea’s Tea of Inquiry that wasn’t astringent at all.

Bear With Me
Delete