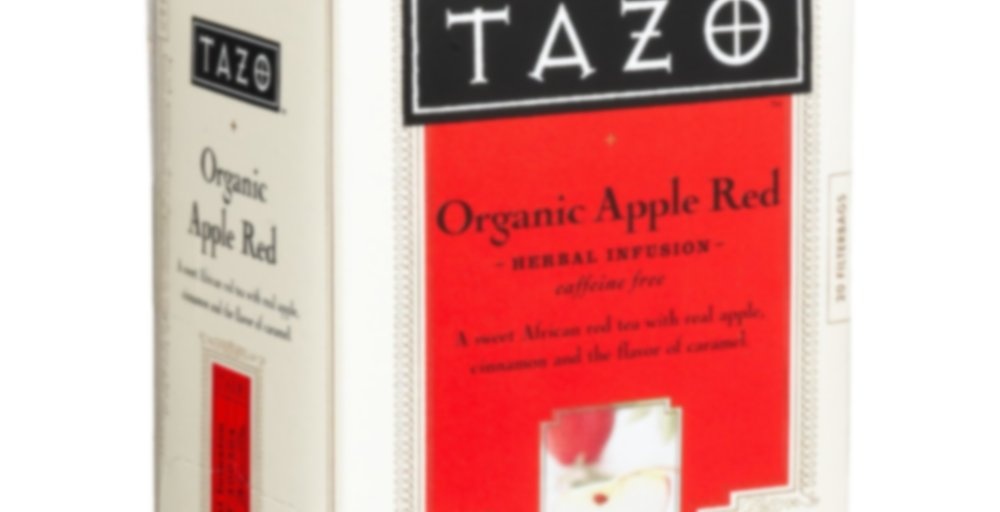 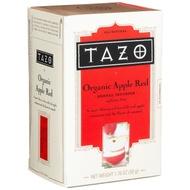 In Tazo Organic Apple Red, you will find the satisfying taste of real apple, sweet cinnamon and rich caramel flavors swirling within a cup of organic rooibos: a South African herb blessed with antioxidants, but nil caffeine. One sip of this red tea may inspire you to do great things. Or to simply do nothing at all, which can be great in and of itself. USDA Organic. Certified organic by QAI. Made in US from imported botanicals.

(I could stand for it to be a tetch less sweet, but then it wouldn’t be pie, either.)

I gave it seven minutes this time and the caramel flavor has really come out. The apple is more in the forefront as well, but oddly it seems that the rooibos part didn’t get stronger. So this is more of an apple cider plus caramel flavor, and I want a gallon of it.

Boiling 7 min, 0 sec
Yours I Like This
7 likes
0 comments
Edit

A bag of this was sitting on my desk when I got to work this morning! Not sure who it came from, but the random acts of tea-ness that my coworkers do for me are great.

Brewed it for 10 minutes this time. The cinnamon is very strong, and the apple is just right. Warm, soothing, delicious.

I bought this as a tea for my kids as they’re always asking for mine (but as mine is almost always black tea that’s a big NO). Gave them a few choices and they went with the apple. This isn’t usually my kind of tea, but the aroma of this one was way too tempting to pass up. The darkness of it makes it taste like a real tea (so satisfies that craving for me), plus has the yummy flavors of apple cider on top of it. The kids drank this in record time and said they enjoyed it so looks like it’s a keeper. Tazo has yet to disappoint me.

One last note: I found when making more of this that I don’t smell the caramel in the cup, but I can when I placed a bit in a spoon for tasting purposes. Odd, but not in a bad way.

I’m a BIG apple tea fan. Specifically green based and green apple though.

Most people love apple and cinnamon flavors… I, apparently, do not. It had an earthy brown liquor and a wonderful aroma. It smelled like so many Yankee candles or scented potpourri. I appreciated the nice sour apple pucker in this tea, but it was so horribly smothered with cinnamon that it tasted more like a cider gone horribly wrong. There were splashes of watery caramel that just weren’t welcome and didn’t fit in.

The most infuriating thing is that I can’t understand where I went wrong. I can enjoy almost any tea, and I love Tazo teas…but I literally threw the cup of tea out.

EDIT: I think I know why I don’t like it! A revelation! It’s flavor reminded me of something, I now remember what it was. It reminds me of the Quaker Oats, cinnamon/apple-flavored oatmeal I had as a child. In respects to breakfast and oatmeal…I got sick of it eventually and have never really liked the flavor since… =/

I love the scent of apple cinnamon teas but usually can’t drink them! ek! I don’t blame you!

Oh, man. I used to live on that Quaker Oats stuff as a kid. The kind we got had this “flavor packet,” out of which you would squeeze a gel-like paste of whatever the flavor was supposed to be. They just don’t make “healthy” food like they used to. Ah, memories.

Quaker Oats, I tried it once, and only once. I hate oatmeal.
I love apple but I hate cinnamon. I can sometimes handle some cinnamon + apple desserts, but I can’t stand cinnamon tea. Well, I guess I don’t like “spices” in general for my tea, because I’m one of the few people who don’t like chai.
Anyway, you’re not the only person who doesn’t like apple cinnamon tea!

As soon as you open the package you think you have just cut into a ripe, juicy apple or opened a crock pot of spiced apple cider that has been stewing for hours! The color is a gorgeous golden-red. The cinnamon note is prevalent, followed by the sweetness of the apple and the earthy rooibus. The apple definitely clings to your pallette and lingers with the spice and rooibus. Excellent conglomeration of flavor with nothing overpowering. Aromatic and playful! This tea is Fall and I love it!

Decided to try again, this time with four tea bags in the cup. It is DELICIOUS. It’s a bit disheartening that I have to add three extra bags to the cup to suit my desired taste, but.. to each their own, I suppose.

Good after-dinner tea, as others have noted…because I drink a lot of tea over the course of a day, I like to drink something decaf if I’m going to have tea in the evening. (TBH, sometimes I skip it at night and just go straight for hot chocolate instead.)

The flavor is good, but there’s something that catches in the back of your throat if you drink a lot of it at once. Small sips don’t result in the tickling sensation about which I’m talking, but downing a whole lot at once does—-almost like your throat’s being attacked by a curious ostrich. I’ll finish the box, but I’ll drink it s-l-o-w-l-y.

Never too keen on rooibos tea, but this could be an exception. I love the strong whiff of Sweet Apple Cinnamon scent; it made me think of warm Apple Pie! Another connotation would be.. candied apple usually seen during Halloween. Dessert and spice, it’s the perfect tea for Christmas and the festive season.

This tea is amazing. I add a dash of liquid sweet cream (from the cold liquid coffee creamer section) and it makes the flavor POP. I’m down to my last tea bag, and I’m scrambling to find more.