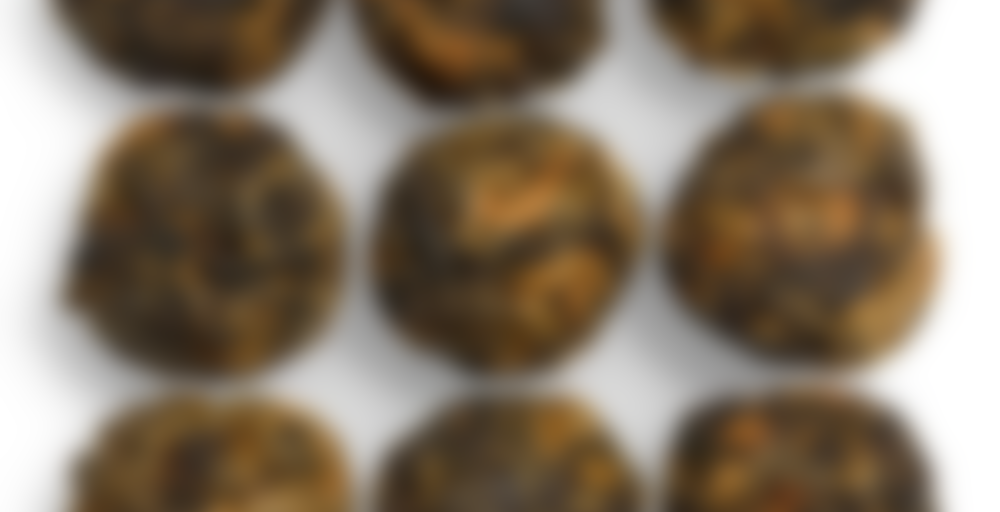 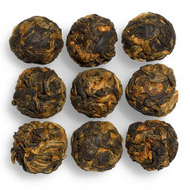 Moist, golden tippy tea buds from China’s Yunnan and Fujian provinces are expertly rolled into balls and wrapped in soft paper until dry, retaining the coveted “pearl” shape after the paper is removed. The leaves seem to dance when brewed, as they unfurl into a lovely creamy cup with subtle sweetness.
Ingredients: Black Tea

I finally decided to open the bag of Black Dragon Pearls I got from Tazo. They were 50% off and since I really liked the pearls from Adagio, I got 4oz instead of the 2oz i was planning.

It says 2 pearls for every 8 oz, so I used 3 for the 12oz I was making. Brews up dark reddish with a tang to the scent.
That tang follows into the taste also. It has an almost…citrus sort of taste? I’ve never really gotten that from a tea, so I’m not sure if I’m figuring it correctly. I want to say it’s almost peppery, but again I’ve never encountered that particular taste in a tea that I figured out immediately, so I’m only going from a guess.
And it’s kinda….sour? But that might be the citrus taste from before.

The second steep was pretty similar to the first except a bit weaker than I was expecting. The leaves are kinda still twisted together, so they could probly do a third steep, but the taste just isn’t there for me to do so. Not to mention it’s just about midnight and I really should hold off on more tea. Lol.

It’s definitely not the rich malty tea I was expecting, that’s for sure. I might try this again with double the pearls with the same water, but I can’t see me getting the taste I want from these pearls.

A few months ago I purchased these during a 50% off sale on tazo.com. I’ve used them a few times but I was not sure how I felt about them so I did not write a review.

I think I’ve finally worked out the right combination for me to enjoy them.
3 Dragon Balls in 8oz boiling water for 3.5 min; resteeps for 4m and 5m.
The cup was pleasant and I’ll do it again.

This yields a solid black tea – nothing fancy; not really malty. These are not my favorite Dragon Balls by any means. I have three others which I would rate higher; however, these are cheaper and without the comparison to the other three, quite acceptable.

I’ll probably use these to grab and take out to a restaurant meal. In fact, someone is coming over with Chinese takeout next week and I’ll probably serve this as one of our teas with the meal.

Tea of the morning here. Thanks to Carol Who for this sample that I’ve been meaning to try.

I steeped this entire sample for 3 minutes in a 20 oz. teapot. What I had was around the equivalent of 6 or 7 pearls. Eh, this stuff is okay. It certainly got some dismal reviews from others but I don’t mind it that much. It seems to be a bit on the side of brisk and winey for me, which is strange for a tea you’d think is Chinese. To me this tastes a bit more like an Indian tea. I thought it was better with some soymilk added. Now I feel like I’m getting a bit of chocolate notes. I’ve definitely has better dragon pearls but this wasn’t terrible in my opinion.

I’m NOT looking forward to my morning. I have to visit the dentist and I’m getting 4 fillings worked on. They told me to eat a good breakfast because my entire mouth will be numb for hours afterwards. I guess I will be having a smoothie for lunch… lol

I’m glad you got to try the Tazo Black Dragon Pearls. My opinion was about the same. Nothing special.

Sorry about the dentist. That’s never fun. But think how strong and healthy your teeth will be! OK, its hard to come up with something positive to say about going to the dentist!

I’m a fan of black teas in general, but this one didn’t quite impress me…it has a woodsy flavour with what almost tastes like fishy or umami undertones, but past that it actually falls pretty flat.

This might be okay as an iced tea with a decent amount of sugar, but as a simple hot steep it didn’t really make me want to go back for more.