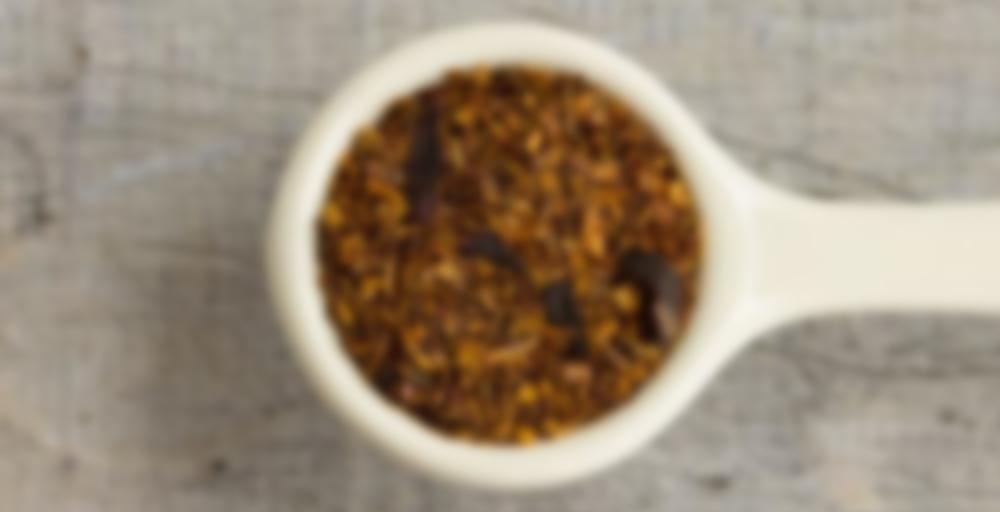 June Wedding! For this “something blue” offering I’m revisting one of my older Tea Chai Te teas, Blueberry Rooibos, which I actually first sampled in their shop during a birthday vacation to Portland in March of 2017. I brought an ounce of it home with me, and have brewed up a warm cuppa for this rainy evening.

The leaf smells more heavily of the rooibos base than many flavored rooibos in my collection, but there is a somewhat tangy berry overtone to it. It actually comes off a little cough syrupy in aroma, and I don’t typically get that with rooibos… the last time I did, that was also a fruit flavored rooibos, so I wonder if it’s something about the addition of fruit notes with rooibos that brings that particular association to my mind?

Brewed up, it is deep red and smells more of rooibos and not much of blueberries, though there is a sort of general dark berry fruitiness to the aroma. The flavor, too, strikes me as stronger on rooibos than fruit flavor, which is more subtle; I get that sort of honeyed sweetness, a slight mellow orange note, a little brisk woodiness, and then toward the end of the sip is a slightly sweet, slightly tart berry flavor. It doesn’t strike me particularly as blueberry, though. But it is pleasant. And I do find that a nice, warm, strong cup of the tea (I do need to be a little more heavy handed on the leaf) produces a nice flavor and doesn’t come out with that medicinal cough syrup flavor that I was worried about. The leaf certainly smelled like it in the bag, though!

It’s a relaxing cuppa. I find it nice with a touch of local honey, too; gives it an almost floral sweetness and makes the berry note pop a touch!