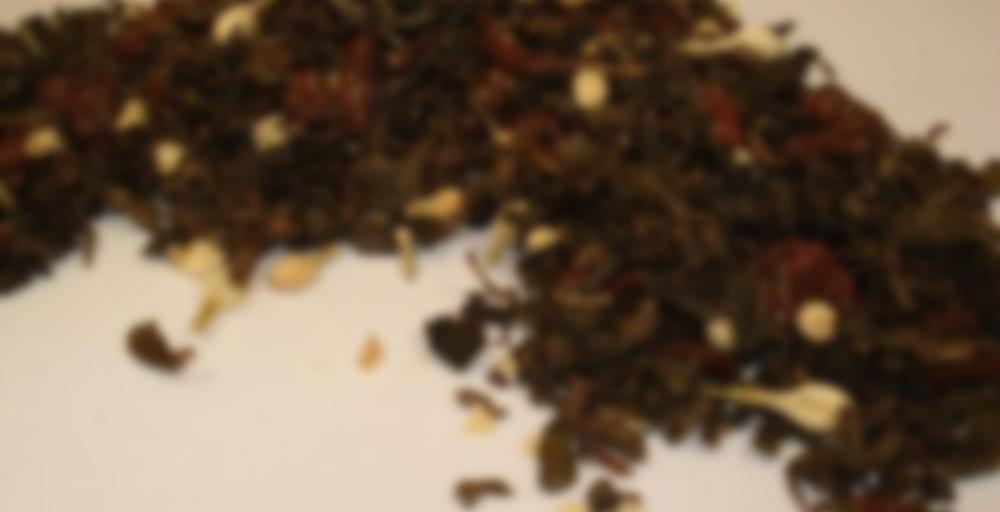 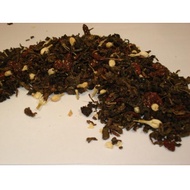 by Tea Desire
72
You

I have been painfully absent from Steepster lately, and really miss everyone/need to catch up on tasting notes! Yet I am so busy. :( On the plus side, had a date on Friday night and it went well (I think)! :P

Anyways, time to launch into my samples from Lynne-tea! I’m so sorry it took so long for me to get to them – things just kept arriving, and since I took the envelopes on vacation, they ended up at the bottom of the tea stash I took with me and have yet to unpack. Good lord I have a lot of tea O.o This is the first one up tonight/this morning! I’m in an oolong mood, and jasmine seemed appropriate as well, so I went for it!

I can’t really tell what the dry tea smells like – the exterior of the baggie has been contaminated with other smells, so it’s kind of flavoured-tea-ish. The tea, however, once brewed smells like a toasty sort of jasmine. I know there are goji berries in there, but I’m not really getting any aroma from them.

I must say, this is definitely an interesting take on a jasmine tea, as the darker oolong lends some really interesting toasty notes that mix with the jasmine flavour, grounding it a bit moreso than with a lighter green/white tea which I’m more accustomed to tasting jasmine in. (Are there jasmine blacks??) Actually, what it reminds me most of is the jasmine tea that is served at my favourite Chinese restaurant, when the tea has been sitting and oversteeping for a while. Although this brew is only verging on being oversteeped. As well, I can taste just a hint of sour-fruity goji berry, but it’s not a prominent flavour.

Though interesting, I don’t think this is a tea I’d purchase for myself. I rarely select jasmine teas to drink, and I found that the pairing of white tea and jasmine is what really works for me, so I’d probably choose that if given the choice! The inclusion of goji berries here, though interesting, didn’t have enough impact for me. Anyhow, thanks for the sample, lynne-tea!

I have a jasmine black. I try to drink it periodically to see if my tastes have changed. No luck so far! It is a super soapy perfume-y one!

Aww strike out! It is apparent that I need to work on my packaging skills for the flavour contamination.

Lynne-tea – no, your packaging skills were fine!! The tea was not contaminated; just the baggie had some additional smells, which precluded me from getting a proper whiff of the dry tea (I could have removed some from the bag, but too lazy). It seems to happen pretty frequently. Also, I have had it sitting next to other teas myself for a couple weeks. Definitely not a problem with how you packaged things!!

Awh phew! Thank you for letting me know that =)

Eventually I will be able to steep my tea longer and start tasting those lovely goji berries. I can see them, there is an equal amount of oolong to goji in the loose leaf, so… where is that wonderful tart fruit taste? hummmmm

I think my favourite steep was number three. The oolong had mellowed out somewhat and yet a hint of the jasmine still remained.

I gave up on the leaf after steep four. Four was pleasant enough, but the flavour of the leaf and the additions were done and another one would have been flogging a dead horse.

The tea is really pretty. I’ve been steeping in a clear glass canister and watching the dark tea, jasmine blossoms, and goji berries float around. Beautiful.

It is also possible that steep one and two were good, but I was too rushed to pay much tea attention. It’s been a bit of an overwhelming week. I need to chill before I crash. Rest breaks, rest breaks. I miss being able to power through with my endless energy supply like I used to do.

A reminder to appreciate your health and wellness when you have it.

So I wrote about going to the mall like a week ago? Or something close to that I think? I know I talked about having to go get new work shoes or whatever – but I definitely didn’t write about the rest of the trip!

Since I was in the same mall as Tea Desire I had to stop in and get something new to sip on with my shopping. This actually isn’t what I had in mind – Tea Desire recently starting selling a few fruitier green/black mixed blends and I was leaning towards one of them, but my store didn’t have them in stock so I went with this instead. Since I’ve been on a little more of an oolong kick lately as well as trying to figure out this whole “goji immunity” thing I’ve got going on where I can’t seem to taste them, it sounded like a good one to tick off my tried list.

It was pretty good; I wish I’d have written more notes about it when I got home because I know I made several observations when drinking it but now, writing about it, I don’t really remember all of them. Definitely tasted the jasmine; but it was the right amount of it to not taste soapy, chemical or like perfume and to not overtake the flavours of the oolong base. The base, to me, tasted rather roasty with some mineral notes to it which was a touch surprising given what it’s paired with. It worked though, and was both comforting and playfully juxtaposed.

I saw so much of it in the dry measured out leaf and I know I very faintly tasted something fruity but I don’t know if it was from the oolong base or the sweetness of the jasmine or actually, for once, the fruit. Whatever it was though was watered down in flavour and non-descript. I think bottom line is that I’m gonna need to try a straight goji tisane to draw any conclusions.

Tea was good though; happy I picked it.

As for the rest of the shopping trip; Tea Desire got bombillas and mate gourds in their most recent stock shipment, and somehow I found myself suckered into buying one. I had no idea how to use it; but it’s gorgeous and if nothing else it gives me something else about tea to learn! Teaware collection is expanding fairly quickly; I’ve hardly bought any actual tea this year, just accessories and stuff.

Also stopped in at the fancy candy store in the mall and picked up some Turkish Delight and fudge, both of which are long gone. I should have got more Turkish Delight though – they make the best I’ve ever had with rosewater. Absolutely amazing, and really affordable. Next time I’m there I guess…

…And it’s after 9PM now. Tre said he’d be home on Monday but he’s not here yet. It’s getting pretty late. No messages from him either; I wonder if I should be at least a little concerned?

Ah, Turkish Delight! My favourite is the one with pistachios.