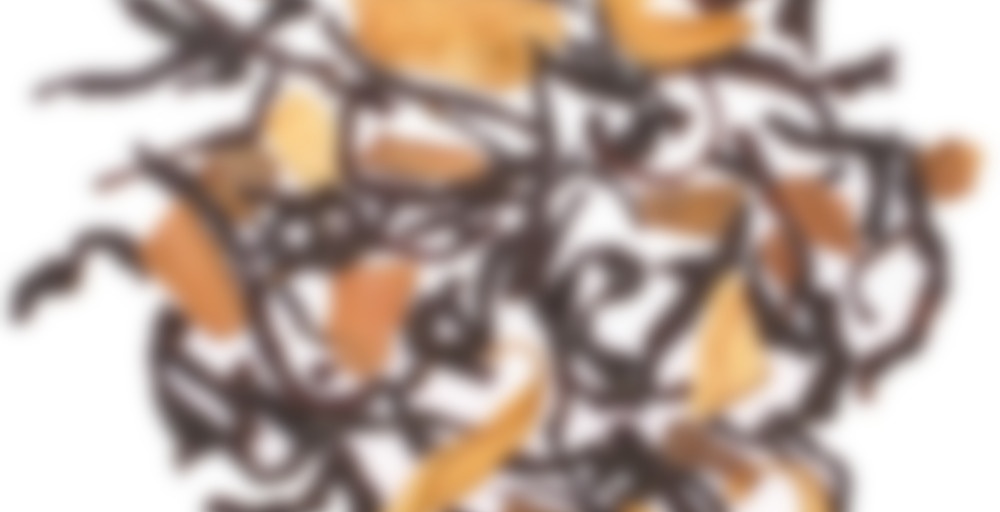 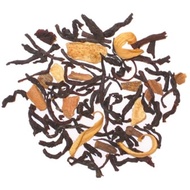 A sweet blend of dried peaches, organic darjeeling and brisk black tea complimented by the spiciness of ginger and the sweetness of cinnamon. Every peach’s dream, and a marvelous afternoon treat hot or iced!

A nice strong flavored tea, which is something that I need right now.

Very tasty – A strong ginger flavor, and the peach is very good… this reminds me a bit of a gingered peach cobbler. Yummy! I only enough of this tea for another pot… which is a bit bitter-sweet. Sad that it’s going to be gone, because I’ve enjoyed it, but happy it’s going to be gone to make way for other teas (I have so much tea!)

I know what you mean about being happy to have room for other teas :)

I think that a peach flavored chai would be a very appropriate way to describe the flavor of this tea. The masala spices are a bit more mild than in a typical chai, though, with the exception of the ginger which is quite expressive. However, I would want it to be a milder version of “chai” if it were to have fruit flavors in it so it would not overwhelm the fruit. In the case of this tea, the flavor of the fruit is not overwhelmed, very nice!

This would be one chai I’d think about putting ROT’s chai honey in.

More peach than ginger especially when it cools for a few mins. This is very nice! Upping the rating.

It’s the first tea I am trying in my new Libre Loose Leaf Tea Glass!

I made a huge mistake when I made this tea. Not because it’s terrible but because I’ve been trying to reset my vampire-like schedule for days now. Yesterday, I finally managed to stay up all night and throughout the day, until 7pm or so, and then I went to sleep…only to wake up suddenly and completely at 1am and be unable to get back to sleep. Ugh. I was going to lie there and try to stick it out, but then I remembered that I bought a bunch of herbal and caffeine free tea samples from Tea Guys to try, since I’m not usually adventurous about fruity and flavored blends…and that I had some Peruvian leftovers in my fridge. That sort of decided me, so I figured that I would brew up one of them. In a state of half-consciousness I waffled and eventually chose this one. Ginger. Peach. It sounded sweet but kind of cozy.

Unfortunately…I did not read the little packet and realize that there was black tea in this. Of all of the blends I chose, I magically picked the one with caffeine in it and then poured four cups of hot water on top of two tablespoons of it, which is almost but not quite the whole sample. Ugh. I suppose today is round two of staying awake all day.

Fortunately, the tea isn’t bad. I mean…I’m going to be honest here…I really don’t have a lot of experiences with similar teas to compare it to. Yes, I’ve been drinking flavored tea (mostly iced, when it’s flavored) all of my life…I’m southern, we do that. (We also tend to add enough sugar to give a small country of people insulin issues, but regardless…) But that doesn’t mean I was paying attention to them beyond their ability to be consumed as a beverage during a meal!

That said, I had no trouble finding the peach or the ginger in this, so it seems to be basically just what was advertised. When it was very hot in the cup, the peach flavor came across a bit oddly. It reminded me of baby food…you know that nutty stewed smell from peaches in baby food? It was sort of like that. Not bad, but not ‘fresh peach’, not tangy…more mellow. The ginger is definitely a stronger flavor, but not overwhelming. Then again, I’m one of those people who buys chunks of crystallized ginger to snack on, so obviously it’s a flavor I’m pretty fond of. I even like the aftertaste of this tea; that’s where the ginger seems to come out most — what I now think of as an exhale-note, something I taste most when I exhale, clear my throat, or cough. Vanilla is like that for me, along with certain other sweeteners. What I really want to do is try this iced and see if the flavors are still as strong. This seems like it would be an outstanding summertime iced tea. I haven’t sweetened this at all, but I’m guessing it’d be delicious with honey particularly. There’s a part of me that wonders if it wouldn’t be particularly good over ice, sweetened, and with just a tiny bit of milk…as strange as that might sound.

I first set the rating for this tea somewhere down around 50, but I think I’m going to push it up a little bit closer to happy-face. I’d rate it higher save that I don’t really have any ratings for flavored blends, so I suppose some conservative caution is in order. Also, I need to stop rating things right on top of one another. The more tick-marks I add to this rating bar, the less easy it is to choose where a new one should go.

Of note…my sample says Ginger Peach, but the tea blend on the website says Ginger Darjeeling Peach. I assume it’s the same blend though. The ingredients look exactly the same.

Hmm… I’m not sure how I’d feel about a baby-food-like tea, either. Though your saying that reminds me of a different fruity tea I tried where I was trying to place a dimension of it, and I think this might have been it. I don’t remember what tea it was, though…if that makes sense. I’m sure I’ll come across it again.

Anyhow, resetting your sleep patterns is rough. I’m such a night owl; it makes it difficult. Good luck!

Thanks, I’m going to need it. I have some pretty ridiculous sleeping issues even at the best of times, and the roster of silly pills I had to be taking (plus surgery and travel) made this inevitable. At least I’m used to it!

The baby food thing sounds gross, I know. I don’t know how else to describe it. It’s not very strong and definitely not as cloying-sweet; I sat there drinking the cup and trying to find it and sometimes couldn’t, even intentionally, but now and then it would be there briefly…mostly when the tea was still really hot. I finished drinking it all a little bit ago (whilst embroiled in some fast and furious zombie killing!) and my mouth still tastes like the tea, but not in a bad way, which seems to speak in its favor.

I’m nosy – what were your Peruvian leftovers? I don’t know anything about Peruvian cuisine and I’m curious.

I don’t know anything about it either, honestly, but it seems to have a lot of similarities with a Brazilian place I order from…roasted/grilled meats (the Peruvian place says it’s a charcoal grill), usually served with beans or rice and some specific sauces that I would have a difficult time describing except by color (notably green, yellow, and sort-of-white…gee, doesn’t that sound appetizing?). They serve empanadas that are DELICIOUS. These seem to be beef (but it’s ground, so your guess is as good as mine…I try not to guess), and the ones I’ve tried have had egg and raisins in them, along with spices…I’m pretty sure there’s onion in there somewhere too. I don’t know, exactly. They’re fantastic, and the pocket it’s served in is phenomenal. It reminds me of potato, somehow.

This last order, I got a baked potato stuffed with a similar sort of thing, only someone had fried it. I don’t do fried food often, but good grief it was good. Sort of vinegary, whatever the marinade had been. Yum. There was chicken with cheese, shrimp, and bacon, a side of spinach mashed potatoes (also awesome…they were smoothly green it looked like matcha ice cream, so weird) and green beans. What else? Oh! Right! My favorite part of ordering food at this place or the Brazilian place is the yucca. Which is also fried, actually. It’s like french fries, only about a thousand times better. So starchy, but so good.

There are also plantains, for those who’re still standing after the starch bomb-o-rama.

Related, I now want an empanada.

Sometimes I feel like being able to type as fast as I can type results in a constant hemhorraging of sentences. I suspect I would be more concise if I wasn’t able to type things almost as quickly as they occur to me.

I wish I could type as fast as you type. I’m a pretty slow typist, compared to most people. Thanks for sharing about the Peruvian foods!

I had this one today and it was actually quite fabulous, the peach was subtle but the ginger was there and it was almost reminiscent of a chai. I wasn’t in the mood for black tea today (but that’s what I ended up brewing a lot of, silly me) but this one stood out. I’ll have to have it again when I’m more in the mood for it so I can give better tasting notes and a solid rating. I might possibly do a comparison with SerendipiTEA’s Cheeky Peach.