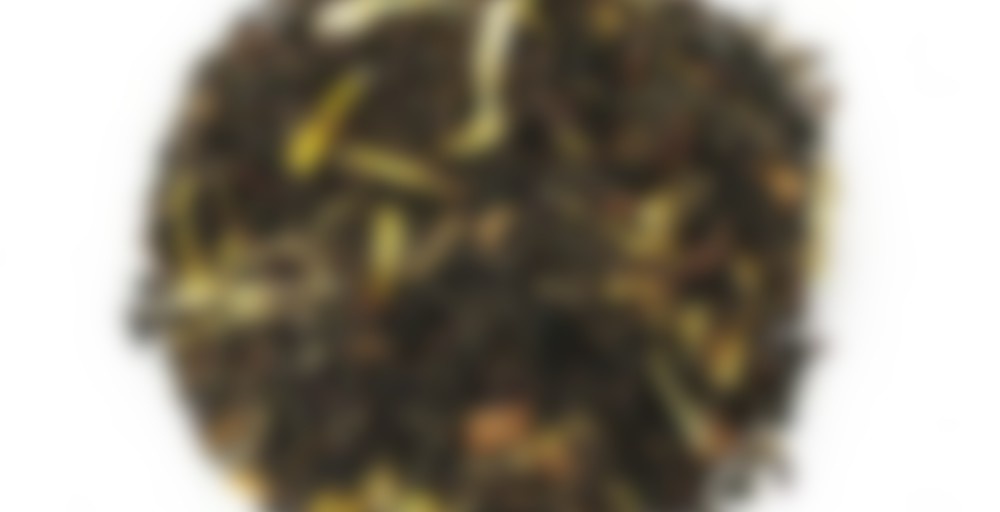 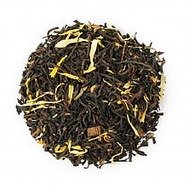 by Tea Palace
82
You

It is a blend of the finest single estate black teas enriched with real pieces of organic Bourbon Vanilla from Madagascar and flashes of gold Marigold petals. It is a refined aromatic blend with a hint of sweet vanilla.

I brought the rest of this one home with me to have it with milk and sugar; I had just enough for my tea pot at home but too much for my cup at work, plus I decided I would negate any further bitterness in this one by taking it with additions. I have to say, it was comforting and delicious. I woke up this morning with a headache and this tea has done some good in relieving it. It went well with my waffles for breakfast as well. Vanilla, caramel, and a robust black tea. I quite enjoyed it.

So I’ve become pickier and picker about my flavored tea bases over the last year or so, to the point where I only really trust certain tea companies to deliver. However, just recently I have come to very much enjoy a nice pot of flavored black with additions, which cover all manner of sins. I guess it’s good for my potential of getting through some of the older flavored teas in my stash!

From the queue. To my vast surprise it has transpired that Dinosara actually shared some of this with me two years ago, thereby being my actual real introduction to Tea Palace. It was Scheherazade, however, who sent me something that actually made me look the shop up, so I’ll continue to consider her my gateway to TP. I’m going to post my queue post anyway, even though I’ve had this before, because I went at it like it was completely new to me and… well, I’ve already written it. It’d be silly to waste all those key strokes, wouldn’t it? Seems I largely agree with myself, but I’ve nudged the rating upwards a bit. It was at 83 points before.

It definitely smells vanilla-y. That’s all I can pick up, really. You could have told me that this was plain vanilla flavoured and from the aroma, I would have believed you.

The flavour is quite lovely. The base tastes a lot like the base for the vanilla toffee treat, with some generic Chinese and some high-grownish tasting Ceylon. And then there’s vanilla again. Unfortunately it has the same sort of slightly disjointed feel to it that the vanilla toffee treat had, where I can pick up both, but they don’t really mesh properly. It doesn’t taste balanced.

As it cools, however, it becomes a lot better. It’s quite vanilla-y now, but I can’t for the life of me work out what else must be in it. There must be something in it that distinguishes it from the plain vanilla flavoured black that they sell, and I can’t really imagine that the only difference is the presence of yellow flowers in this one. Particularly when one knows that these flowers tend to impart little to no flavour at all. From what I understand they are more of a texture thing.

So what’s in here that makes this blend different from just a vanilla flavoured tea? Can it be the base? I’m getting a slightly smoky, grainy note from it now and it’s reminding me strongly of keemun. Could the Chinese part of the base be a keemun? That sounds likely.

I think there’s something else in here as well. Caramel? Could it have both vanilla and caramel? In that case, then what sets it about from the vanilla toffee treat? There’s definitely a caramel-y note here, but that could also just as easily have come from the vanilla. Perhaps the difference really lies in the type of vanilla used? The other vanilla flavoured black that Tea Palace carries is a Madagascan bourbon vanilla. Perhaps this is a different type of vanille?

Or am I just descending into pure guesswork? I think it’s time to look the blend up now.

Okay, so it’s definitely vanilla! I win! What have I won, what did you all wager?

The bit about different types of vanilla was not hte difference, though. My previous guess that it had something to do with the base was correct, though. The description says a blend of the finest single estate teas, but not which ones or the country of origin. I expect many of the high quality Chinese teas that we get are probably single estate as well, or close to it, but there doesn’t seem to be as much emphasis on this when it comes to Chinese teas as there is with Indian and Ceylon teas. Therefore whenever I see ‘single estate’, I think India or Ceylon, not China. Perhaps the keemun-y notes were actually something low-grown. I’ve had a low-grown Ceylon (Galle, I believe) which had a flavour similiar to a standard keemun.

It’s a lovely blend this one. I’m glad I got some of it.

Yours I Like This
23 likes
2 comments
Edit
keychange
Delete

Oh my god. A smokey vanilla tea sounds amazing. Not this one in particular, but someone has to do it!

I once had a citrus flavoured smoky black. It was awesome! I wish someone would make a smoky black flavoured with red berries.

I’ve got a bit of this tea thanks to threewhales! Thanks! It is a really nice vanilla black with just the right amount of heft. Yum! This one is really good.

A very nice, very classic vanilla. I don’t like the addition of the flowers because, really, they don’t add anything to the taste and they are just there to look pretty – only once they’re wet they just look sad and floppy. But nevertheless, this is a lovely tea. It’s also great for blending with other black teas (I loved it with Adagio’s Hazelnut).

This is another great vanilla black. Angrboda knows her vanilla blacks. The vanilla here is more mellow, but still apparent and the base complements nicely. Not nearly as intense as Fru P, but still lovely.

I could see this being a good late night tea. It’s comforting in a vanilla way. Perhaps this one is more accessible than Fru P?

I think this one feels more posh than Fru P’s does. Tea Palace is a UK company. I don’t know what their shipping is like for where you live though. It’s worth looking it up. I’ve been really pleased with shopping there the two times I’ve done it, and the ‘samples’ are HUGE!