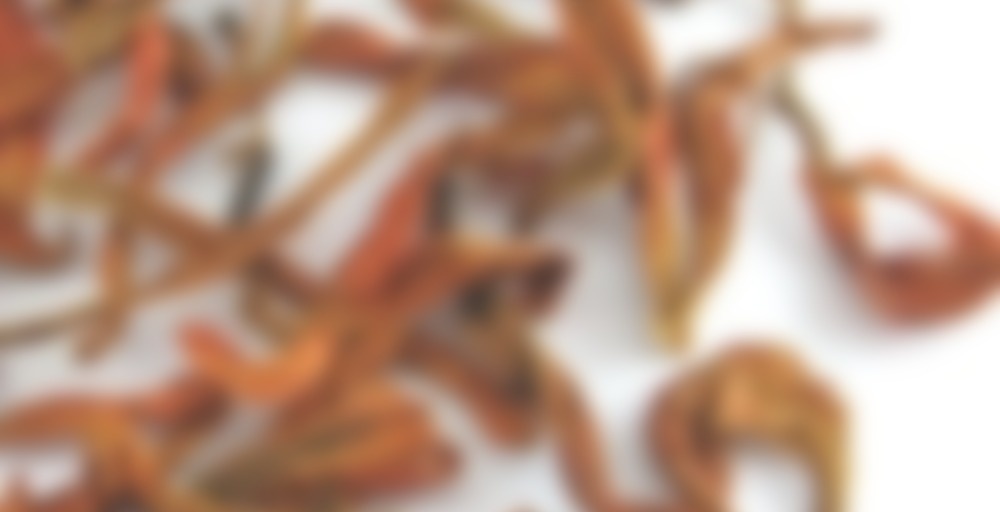 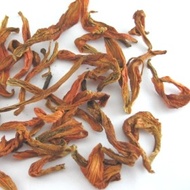 Lily flower tea helps to moisten the lung and alleviate cough, clear heat of the heart and quiet the spirit. Lily flower tea can firm the skin and reduces wrinkles. A lot of beauty products uses dried Lily as one of their ingredients. Lily flower tea is also effective in clearing body heat.

I got this not-tea a while ago, mostly because it says that it is supposed to be good for the lungs. I have a tendency towards bronchitis and typically disagree with most antibiotics, so I’m up for anything more natural to help me during those times.

Right now is one of those times. I have a cold. Another one. This is cold number three since September. It sucks. I’m miserable and, in hopes of preventing a sinus infection (like what happened with my last cold) or bronchitis, I’m dosing myself with anything and everything I can think of: decongestants, expectorants, herbs (four different ones, actually), homeopathic pills, steam, nasal irrigation and plenty of tea. I’m cycling through different teas (spearmint, Bronch-Aid, general happy teas and other miscellaneous herbals) and I decided that it is this one’s turn.

I’ve had this a couple of times before. I’m not sure how it does as far as lung-health, but it doesn’t cause anything to get worse so why not? This is not a tea I have for fun, though. It’s not nasty or anything. It’s just weird. Really weird. I mean, you’d think lily = flower so lily tea = floral notes, right? No. TeaCuppa says this is “refreshing with a sweet and smooth finish”. I say they must be drinking a different tea.

Think Chinese food. Specifically, breaded Chinese food (chicken, perhaps?) with lots of garlic, some soy sauce and maybe even a few water chestnuts. It’s actually fairly complex for a single-ingredient herbal tea. But that complexity all ends up relating to Chinese food in my mind. And it’s weird to drink something that tastes like dinner.

The overall pungency is milder when it’s brewed at a lower temperature (195° versus 208°) and a two minute steep results in a brew that is simultaneously clear and cloudy. Mostly because the cloudy bits in the tea are fairly large (pollen?) so you can see the clear, light bronze colored liquid around the cloudy, floaty bits which range in color from yellow to dark orange. I tried photographing this tea once. It didn’t go well. This is as good as it got: http://flic.kr/p/9U6yjX

I find it virtually impossible to rate this tea. I mean, it’s not nasty – I can easily finish the whole cup. But it’s just so weird and that turns me off of it. But I drink it for the (hopefully) medicinal value and, as a medicinal not-tea, it’s pretty good in a suddenly-I’m-craving-General-Tso’s kind of way. I was coughing up a storm with my throat feeling all icky and scratchy before I had this. One cup down and my throat feels nicely moist and I no longer want to cough up a lung. (Okay, so I have never really wanted to cough up a lung, but sometimes it feels like I need to, you know?) I still have a bit of a tickle that makes me clear my throat every so often, but I’m feeling a lot better at the moment. I don’t recall my three cups of Keemun this morning making quite the same difference (but they were tastier, so trade-off, yes?).

Would I have this tea for fun? No, too weird. Will I have more today? Yep. Would I recommend this tea? Uhm, maybe? If you are up for weird stuff, like Chinese food and have lung issues that you’d like to pamper herbally, this could be the perfect tea for you. For myself, I imagine I’ll only be busting this on out when I am feeling unwell.

(ETA: The second steep (2:00) is weird but less weird than the first. Now it’s more a post-Chinese-food-dinner-that-I’m-following-with-fried-sesame-seed-balls (but without the sesame flavor). It’s sweet and almost glazed-bread-ish but pungent in a way that makes me think I’ve just eaten a heavy meal full of darker notes which still linger. It’s actually edging it’s way to good, not just weirdly inoffensive. Maybe the third steep will be more fried sesame balls. I love those things.)

Haha! This is such a weird one! I tried some too. It smelled like a smoked beef snack stick and tasted like tomato juice with a smokey finish. I agree that it’s surprisingly complex for a tisane and that while it is really weird tasting it isn’t hard to drink. I like this tisane a lot more than I should… Will I buy some to keep on hand??? Eh, probably not… Will I try it again someday for fun? Yeah, probably. It’s too unique and interesting not to!