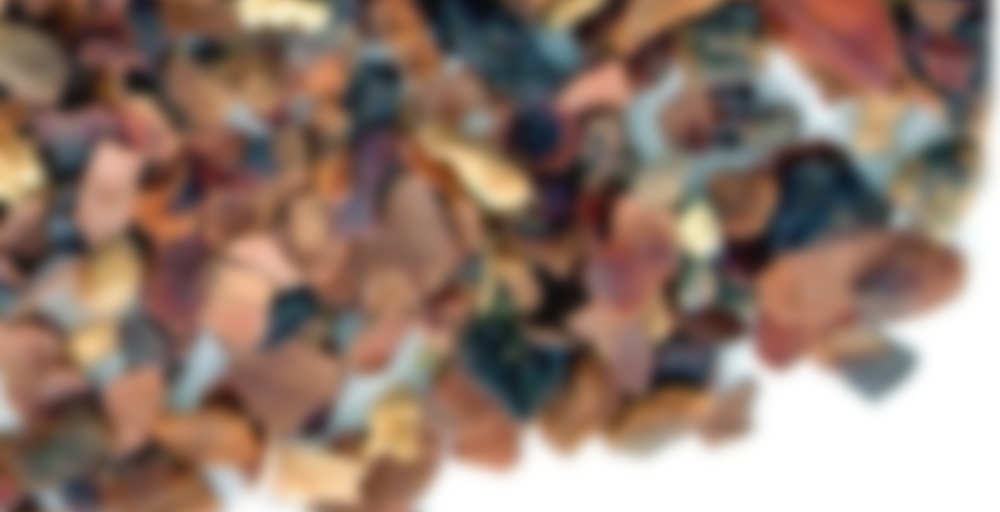 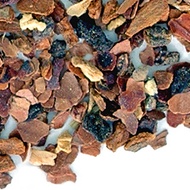 Spicy Chai with a touch of chocolate. A naturally caffeine free composition of some of the world’s most treasured flavors.

Preparation: One level teaspoon per 8oz cup of filtered, boiling water. Allow to brew 5+ minutes, sweeten and add milk. Or try a classical recipe: brew at a soft boil for 20 minutes; drain through a filter; add 8oz milk – hot or cold.

What happens when a mild chai meets cacao? This tea. I wish there was more chai to it, although frankly, it’s quite delicious as is, and it’s only billed as “Chocolate Enlightenment”, right? Very vanilla cacao with a touch of spice. Really lovely! So glad I grabbed a box (2.6 oz) of this.

I don’t know why, but I had just assumed this was straight cacao shells when I started steeping it; I really just didn’t look closely at the leaf at all. So, when I took my first sip I almost spit it out. Not because it was unpleasant, but just because all of the notes of spices caught me so incredibly off guard. Like thinking you’re going to take a sip of apple juice and it turns out it’s coke instead.

I did enjoy it though once I kind of adjusted to what I was tasting. Admittedly, I still didn’t realize there were quite so many spices – it really just tasted heavily to me of cacao with cinnamon, ginger, and a peppery sort of finish. I feel like chocolate and black pepper is actually a severely underrated combination so I was amused to be getting that combination of flavours.

Thanks VariaTEA for sharing!

You’re welcome! It originated from Sil!

Had this earlier today. I keep meaning to try it as the box suggests – as more of a latte version, but i forgot. AGAIN. Like the chocolate/chili of this one. Wish i could take advantage of 1$ shipping promo with tea G again

Whaaat is this shipping promo?

Mmmm it was something like 1$ shipping to us states. Nothing for Canadians so I deleted the emails.

Thanks Marzipan for a sample of this tea!

I have electricity again, YAY! Apparently what we experienced yesterday was a “Macroburst”. They’re kinda scary! We were also pretty lucky. I think we are one of few houses in our neighborhood without some kind of property damage.

So, this tea is pretty good for an herbal. Chocolatey chai is exactly what it tastes like! I still prefer a more bold flavor than most herbals can give me. I might give some of this sample to my mom for Mother’s day tomorrow to see if she likes it. She can’t have caffeine at all but really enjoys tea and anything chocolatey :)

Yay, glad you are back!

Sipdown no. 137 of the year 2014. Not the only tea I drank today, but I’ve been trying to stay off the internet as much as possible today so I can get a lot of writing done on my day off. I’ve written about eight pages today, as well as revising twelve I’d written earlier to incorporate workshop comments, etc. Pretty good productivity considering yesterday I had doubts I’d get anything done at all. I still have to write the climax and the end but I have them in my head. The title is a problem, still. I like the story, though it’s an experimental in structure and tone and you never know how something like that is going to be received. Oh well, can’t worry about that now. Must finish.

I’ve been sipping this puppy down over the last few nights. I’d forgotten I had it. Then I remembered I had it but couldn’t find it. When I found it, I realized there wasn’t really that much left, nor did I love it, so I should add it to project immediate sipdown.

Then I went to write this note and realized I never wrote about this way back when I originally tried it. Probably because there’s not a lot to say about it.

I don’t get a lot of flavor from it. It’s rather light weight all around. The flavor it does have is mostly chocolate and isn’t horrible, it’s just not enough to excite me or make me really look forward to drinking it. I drank it straight up, though it does have a chai-like profile, because there’s no true tea in it and I’m not moved to go to the trouble of making a stove-top effort for a tea-less concoction.

This sounded so much better than it turned out to taste. Ah well.

YAY for my first TeaG experience (even if it is both cacao and chai – two things I don’t typically love :P)! Thank you so much MissB for allowing me to try new companies and teas. Alas, this one, like the other cacao teas, is just not for me. It smelled really good though :P.

Also, anything chocolatey was bound to be a let down today after my roommate made a delicious Chocolate Mousse (the real version, not the overly sugared milk chocolate whipped cream that companies tend to offer)! So decadent and oh. so. delicious!

I would offer to send some but something tells me it just would not travel well :P

Spicy coco wheats. That’s honestly my first impression of this tea…it’s not bad, but it really does taste just like it. There’s a solid cocoa backdrop with upper notes of cinnamon and some other spice that I can’t quite put my finger on.

It’s tasty, though, and I like it…but coco wheats and I have an unpleasant history, so I’m not likely to drink it willingly in the future.

Thank you for the (seriously gigantic, omg) sample, MissB!

I might try all the non-caffeinated ones tonight. That could be fun. I’ve started trying to tin some of the larger amounts up. The O’Connor’s Cream does not fit into the DavidsTea tin quite yet. I’ll have to make a couple cups before it’ll all squish in. :)

Like, it REALLY tastes like them. A LOT. But somehow, in tea form, the flavour isn’t nearly so terrifying for my taste buds. It’s probably a texture thing.

Still. I think I’ll be passing the rest of the sample along to my brother (who LOVES those cookies) or my BFF (who loves chocolate and chai). I am so glad I didn’t get sucked into buying 100g of this. I was soooo tempted. But I resisted. And that was a good choice.

snort Yep I do! I might need to get more whiskey tho.

BLECH. :) Freshly homemade, maybe. But I really dislike the packaged ones.

Oh yeah, well bought cookies always suck haha. I was picturing a homebaked variety in my mind too.

I’ve only ever had the packaged kind. :) We used to get them sent over from Germany at Christmas…

Though my experience of this was from drinking it iced at their main store, I know it would make a wonderful hot tea. It smells rich and magical. I would brew it for longer, too since it was kind of light.