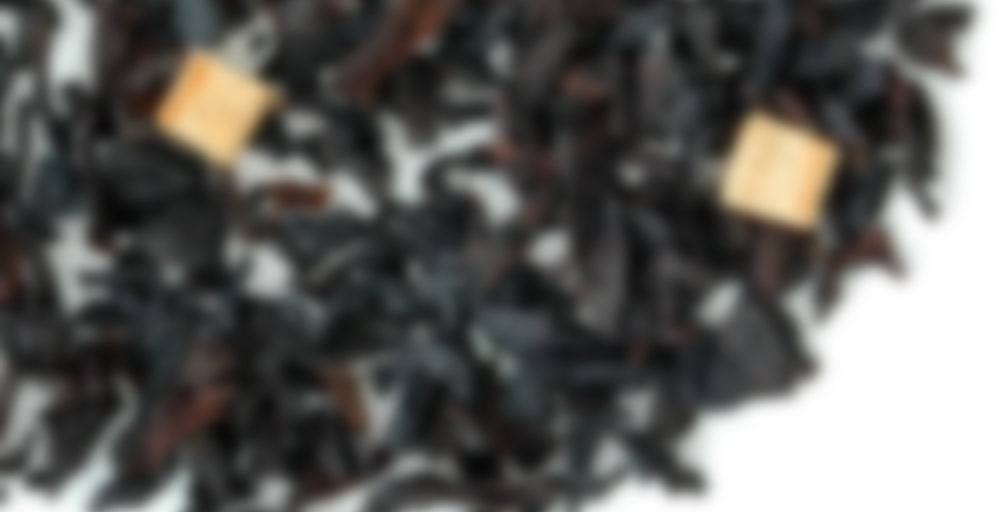 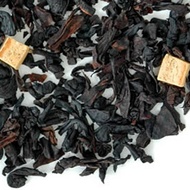 Intense, sweet caramel and smooth cream blend together for a caffeine free, guilt free experience you will want to savor again and again.

That was a pretty awful tea day, and it’s probably my fault, cause I poured boiling water over my green oolong. Oops.

Anyway, I decided to go with something basic and tasty, and opened up my Decaf from TG! The smell of this is AMAZING. It’s identical to caramel corn. Cracker Jacks. Mmmmm. The dry leaf is sorta small, and interspersed with little caramel pieces. It’s mouthwatering. I promise.

So I steeped this one up and on the pour, the wet smelled just as wonderful as the dry. The infusion is a dark copper color, and the smell coming off of it is creamy and caramelish. On my first sip, I was actually pleasantly surprised. This one tastes like a nice brisk black. There’s only a slight hint of bitterness and astringency, but it’s pretty pleasing. The black flavor gives way to a sweet caramel taste. Not burnt or overdone, just mellow and lingering in the aftertaste. Like when the sugar from caramel corn lingers on your tongue after you’ve eaten a mouthful. It’s less of a cream and caramel taste, and more of a united flavor. It’s pretty subtle overall, which is nice. The black tea base might be a little more watery than normal (due to its decaf nature), but it’s nothing to cry over.

This is a great little tea to calm down with after a stressful day. Which is what I had, with my oolong debacle. Ouch. Here’s hoping tomorrow brings better tea experiences!

Did you find one of those prizes in the tin/package? I mean that’s the best part about Cracker Jacks :D

this tea sounds amazing DELICIOUS. I want some now!

Hahaha, that’s be awesome, Ricky, but no, no prize!

And Eva, this tea is definitely yummy! It’s very, very subtle, and the flavors don’t knock you out, but it’s compulsively drinkable. :)

Eva, I actually ordered it from online, at http://www.tgtea.com … There’s free shipping on orders over $35!

ah ok….that’s cool, yeah…i order most stuff online as well. . . was just curious if you had gotten it around here. . I know they have a nice store in Chicago though!

What would a log of mine be without a wayward analogy? [Don’t answer that.] I’m just going to lay it out here at the start.

This tea reminds me of Sudafed. Not because they taste similar, but stay with me. When I was younger my mom used to give them to me and my brother when we were congested and I liked the way they tasted. One time I was feeling particularly petulant [possibly upset because I had to stay home and miss something fun at school – that’s not something that really happens any more] and she gave me a Sudafed and a little cup of water. I told her I wasn’t going to take it and she told me that if I didn’t I was going to be really uncomfortable that day. So I grabbed at it and put it in my mouth and stood there, pouting. Then she said, “You’d better swallow that or it’s going to taste bad.”

I did not [and still do not on occasion] deal well with people telling me to do things.

I stood there, glaring at her, arms crossed, and didn’t swallow it.

A few seconds later, I was spitting it out on the floor and rubbing my tongue with my finger. My mom laughed at me and said she’d make me some jello, and I smiled sheepishly and took another Sudafed.

If you’re wondering what this story has to do with this tea, it’s because it starts out nicely but I found that it has a kind of nasty finish. It’s a shame, too. It smells amazing – somewhere between caramel and kettle corn and I was pretty excited to drink it.

In sipping it, it starts out tasting as advertised – that delicious sweet and salty combination you get from caramel, with maybe a little bit of a roasty note swimming beneath that is reminiscent of popcorn. And then I gulped it down.

it was bitter. Sour, almost. And actually, lightly reminiscent of what Sudafed tastes like if you melt far enough through that red sugary shell. It wasn’t happy, and I found myself taking sips of the tea to try to combat it only to be greeted by the far less appetizing aftertaste on the finish. It was an unpleasant little vicious cycle it pulled me through, right to the end of the cup. I would have stopped altogether, if I hadn’t been holding out hope that it would fill out as it cooled. No such luck, I’m afraid.

All in all, the aftertaste wasn’t HORRIBLE, but it did qualify this tea as being something I’m not going to order. I have a little bit left, so I’ll try it with sugar, or maybe some honey. But I’ve got a couple of other caramel-tasting teas that treat me better, so I’ll be sticking with those unless adding some form of sweetener kicks this up to mind-blowing.

I’ve gotta thank teaplz for sending me this, because it is for sure something I would have ordered without thinking [I mean, it’s called Cream Caramel – which is the equivalent of a talking puppy jumping in front of my face yelping “CHOOSE ME!”] and would have ended in annoyance. Here’s hoping the remainder of my sample ends up sparkling.

I had a very similar experience with Advil. Yuck. Anyway, what’s your favorite caramel tea so far? I think I’ve only had one (well, plus Jackee but I don’t think that really counts since he’s not intentionally caramel-y) and it was only okay-ish so my hunt continues!

@Auggy Jackee is actually the only full on caramel tea that I’ve had, intentional or not. I’ve had a bagged one that did not taste like anything I’d consider to be good. Other than that, Caramelized Pear and Dawn are frontrunners. Sinharaja had some nice caramel notes in it that I enjoyed. I’m going to try the one Jack mentioned in a comment when I get around to ordering from Upton.

@Shanti Agreed! Though, I’ve learned from my Sudafed experience and typically do not suck on those too long either. [As Auggy has apparently done.]

Sorry this was gross to you! I wasn’t getting that aftertaste, but now I sort of have to go back and see.

And yeah, brown, sugar-coated Advil is awesome. The best tasting medication by far is amoxicillin and its pink, bubble-gum goodness! My uncle’s pharmacy used to make amoxicillin with real bubble gum pieces suspended in it. Mmm.

I’m so glad I wasn’t the only Advil lover in the group.

Wouldn’t it be lovely to find something intentionally as caramel-y as Jackee and to get it there without having to hit the magic water & ratio number? Of course, it doesn’t seem like hitting that is that hard now that it has been revealed, but I keep having the fear that it will suddenly become impossible to find. I overthink things and worry too much.

@teaplz It was literally like drinking two completely different teas. Very weird. Also, I think I would have liked my medicine more as a child if it had contained pieces of bubblegum in it. Genius.

@Auggy That’s the dream! And having lost the caramel-taste [though it was mainly because I had no idea what the hell kind of anything I was using], losing it again is a very real fear for me, so I’m completely with you on that one. I have hopes for finding a solid caramel tea, though.

Nutty with a bit of an odd aftertaste. Strong syrup-like sweetness with an aftertaste reminiscent of an artificial sweetner. Almost bitter note, but dilute.

Thanks to Sil for sharing with me!

Another sample from Sil!

I’m normally not fond of decafs and herbals but, for whatever reason, TeaGschwendner does not make a full strength Cream Caramel black tea. There is Cream tea, and Caramel tea, but the combination is only decaf. Weird.

It definitely smells caramelly. Dry leaf and steeped leaf smells specifically like caramel popcorn and when freshly boiled was deliciously cozy to sip. I did need to add creamer though – while the flavor was really nice, the watery texture was offputting and demanded some fortifying.

So I liked this. I would recommend it for someone who wants caffeine free dessert options to drink. I probably wouldn’t buy it for myself just because I would rather have the real caffeinated thing (and I may resort to buying caramel and cream separately and combining them to see what happens). But it was tasty and fitting for an afternoon cup of tea.

haha that’s what i did Joon, when they were like no…only decaf! I especially like having the cream on hand because it’s VERY subtle and makes a great addition to other teas to make them creamier and more delicious haha

Okay, now I’m annoyed. I wrote a whole note about this and then Steepster went through as if it had posted, but didn’t save any of the text. WTF.

Anyway, this came from Sil.

It’s not bad, but I would like more flavor. There are nice butter notes and a bit of burnt sugar in the background. The base tea is mild and unobtrusive, with a bit of a malt note but not much else.

Once again the dysfunctionality is irking me, too…

Farewell delicious tea! I will pick more of you up in future, or I’ll just. Get the regular caffeinated version :)

The always awesome Sil picked this up for me when she was at the teaG store in Chicago…. I hadn’t even tried it before but it sounded good and I wanted another caffeine free option for the nights.

I’ve had this two or three times since, once at the movies and once or twice at home and oh man. I don’t get the crappy rating this has. For a decaf tea, it’s frickin’ AMAZING. Like the “Vanilla comoro” of caramel teas.

It’s the caramel tea of my dreams…the kind with a creamy note rather than that burnt sugar note I’m not fond of.

It makes me wonder how TeaG’s Cream black tea tastes, because at some point I will definitely be ordering more of this one, so perhaps I should try the Cream tea also!

“cream” is REALLY subtle…i enjoy it, but more as an addition to other teas to soften them or add a little something. I actually bought cream and caramel my first round so that i could make a CAFFINATED version of this lol