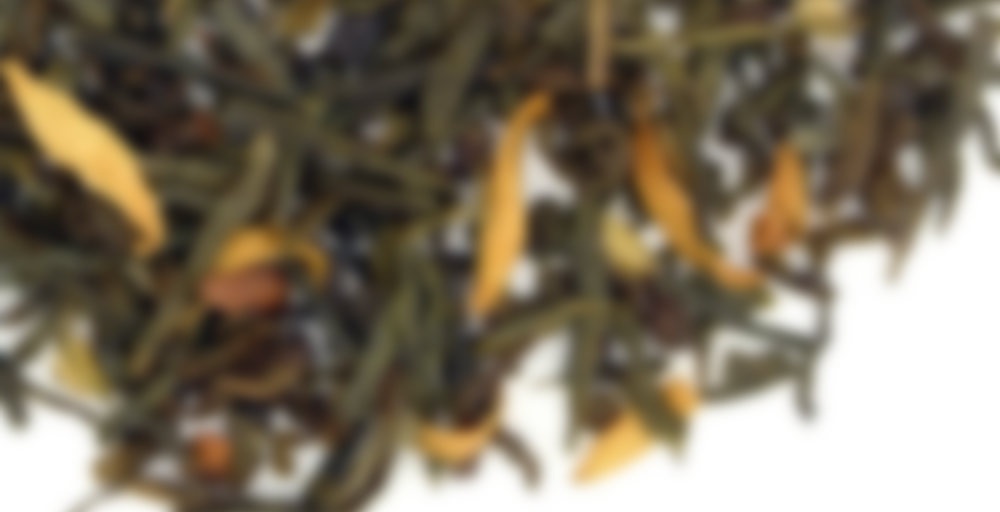 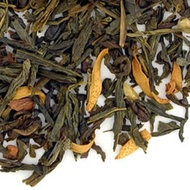 A sumptuous almond pastry profile that is not to be left off any list. A nimble contrast to the heavier flavors of the season, Sencha Claus delights in warm, spicy sweetness.

Tea #29 from Another Traveling Tea Box

This is another TeaGschwendner tea that has been relabeled and sold by Tin Roof Teas so I’m going to put the tasting note here.

The dry leaf of this tea smells amazing, it’s a great blend of almond and cinnamon. It really reminds me of christmas… and cookies… and pastries. I can’t wait for the holiday baking season to get here. The tea itself let me down because I didn’t care for the blend of green teas used as the base. There was also a bitterness to it when I drank it that only got more noticeable when it cooled, at room temperature the tea was undrinkable. I think it may be from the orange blossom because now that my tea has completely cooled I’m getting a bit of a perfumey note with every sip. I think this could really be a great tea, if it were tweaked a little bit.

I’m going to fix myself another cup and play with the temperature a bit, perhaps the bitterness will go away some with a lower temp. I really don’t want to give up on this tea yet because it smells so good. I’ll add a numerical rating after my next cup.

What a cute name.

Anyway, this was the only holiday tea that I ordered from TG, and when I opened the package, I immediately fell in love with the smell. Mmmm. It smells like almond pastries, specifically anything made with marzipan. It’s delicious. Like pignoli cookies. It’s really strong and assertive, with a hint of cinnamon and maybe something citrus in the end note.

So I steeped this at 194 degrees (yeah, it’s that specific), and the infusion was a lime green-ish color. The cup smelled absolutely mouth-watering. Seriously almond pastry. Not almond cookie, like SpecialTeas’ tea, but a more robust marizpan-ish smell. The wet leaves have a similar flavor.

There’s a lot going on in the taste! The tea is there as sort of a grassy note, but it’s not really assertive. In fact, it’s a little bland. That’s probably my main complaint about this. But the other flavoring in here… mmmmm. We’ve got some citrus that comes up. It’s sort of similar to the flavoring in a sfogliatelle, an Italian pastry made with phyllo with an orange-flavored ricotta-style filling. It’s that sort of orange flavor. Not the tart quality of the citrus, but the orange-ness. This probably comes from the orange blossom.

The other flavor that’s the most dominant in the aftertaste is that almond pastry taste. Pure pignoli cookies (which are made predominantly with almond paste). There’s a teeny creamy component, but it’s barely noticeable. It’s almost an almond extract flavor, or a scented flavor. It’s very subtle, and doesn’t overwhelm the rest of the flavors. If you concentrate, you might get a bit of cinnamon. I only got it on a few sips.

The tea base of this definitely isn’t the greatest. If it was better, this rating would probably be higher. It doesn’t taste fresh and doesn’t play well into the balance of the other ingredients. But the flavoring is definitely spot-on. The flavors aren’t as strong as the smell (thank god, or else I’d be pretty unhappy). Very nice for a holiday blend, though!

I first tried this tea about 5 years ago, when living in Chicago. Now, my brother-in-law regularly brings it to Christmas gatherings because he knows I like it.
And I do like it- the almondy sweetness complements the sencha well. But today I am getting something soapy in here too. It’s strong enough that I am wondering if I somehow got soap on my cup rim. Or perfume.

Am trying to push past this to the delicious almond. I’m even having this with almond biscotti-like cookies. Could it be the orange blossom that can get perfumey?

As you may be able to tell, this one is very inconsistent for me. I wouldn’t pounce on the pouch every year in December if it always tasted perfumey/soapy.
All of this said, when this one’s good it’s absolutely wonderful- the perfect holiday dessert tea. So I still recommend it.

Added a bit of almond milk and it didn’t curdle! Ok, but not great. I think this is a love/hate tea and if I drink it too much I may start to dislike it violently. Something about it is weird… maybe it’s the cinnamon/almond/orange combo is just not quite right. It could be a great tea, but the execution just doesn’t live up to the concept…

Agreeing with the weirdness here. I could be so much better, and I’m not sure why it isn’t! Dimensions are missing, I think. It tastes flat.

yeah, I know. If I just drink it without paying too much attention to it, I can enjoy it. But once I start analyzing it too much, it gets weird. Thanks for sharing this interesting tea with me though.

The leaf smells odd but I can’t quite place the scent… a little spicy and almond-y but weirdly also reminding me of the Strawberry Dream from last night. The liquid form, however, smells very different. My first sniff made me go, “Hmm, Christmas.” Then I remembered the name and though, “Well, duh.” It’s sweet and dessert smelling – really quite delicious. Orange blossoms and almond are easily picked up and without the weird smell from the dry leaf that reminded me of last night’s honeybush… unpleasantness. There’s a little potpourri smell but it doesn’t show up unless I’m constantly sniffing the tea (and honestly, I can get that smell from most spiced teas). But it’s like almond pastry potpourri. Something with sweet, nummy icing on it.

But darn it, the taste is more potpourri with a almond + orange blossom chaser. Larger swallows give me a POW of orange blossom with a spice base which is nice, but the overall taste of the tea seems to be brought down by the green tea… it’s a bit flat and heavy. I think a lighter tasting green tea base would make this tea sparkle some.

There’s a lot of promise in this tea but unfortunately it just doesn’t combine right for me. This seems to be a disappointing trend with TeaGschwendner’s teas. But as I’ve said before, one aspect of these teas that I do like is the fact that they don’t overflavor their teas. If only most of the flavorings didn’t make me go ‘meh’.

Using a gifted sample, the aroma of the dry tea (in bag) is alluring. This scent carries over well once brewed and let steep (2 min). The taste dances on the tongue like a light cake. Cinnamon and Vanilla combine evenly, but don’t completely over power the other notes. An enjoyable seasonal tea.

Advent Day 5, Sencha Claus. Heh heh heh, clever. Dry this smells super fruity, like fruity cereal. The almond comes out much more in the cup with a slightly bakes flavor and mixes well with the fruit flavors. The tea base is light, but has a mouth drying sensation after each sip. I don’t quite get what I think of as sencha in this cup, but it’s a pretty tasty cup.
https://www.instagram.com/p/B5v9VMAAvwo/?utm_source=ig_web_copy_link

Edit: Awwww crap. I opened door 6 instead of 5. Advent fail.

Very “marzipan” in terms of flavour, which I suppose makes a lot of sense for a German tea vendor. However, there’s a bitterness to this that is unpleasant to me; I think it partly comes from the almond, partly from the orange, and partly from the green tea itself. I’m sure a little bitterness might be a nice contrast to the sweeter marzipan and may be intentionally present – but this is enough so that I don’t find it hardly drinkable.

Picked this up at the Christkindlemarket in Chicago this past weekend. I generally stay away from gimmicky, flavored teas, but I am a big fan of almond flavored items and marzipan and since I wanted a tea for Christmas time, I decided to pick this up.

Opened the tin and the aroma screamed Christmas with accents of cinnamon, almond, and orange zest. Brewed a small pot for me and my wife following the recommendations on the package although I wasn’t dead on with the temperature. Slightly sweetened the tea with honey which I think helped accent the almond flavor.

A number of the reviews complain about the tea component of this drink, and I agree that there might have been better choices for a base for this tea, but overall, we really enjoyed it and expect that this will probably make it into regular rotation around the holidays.