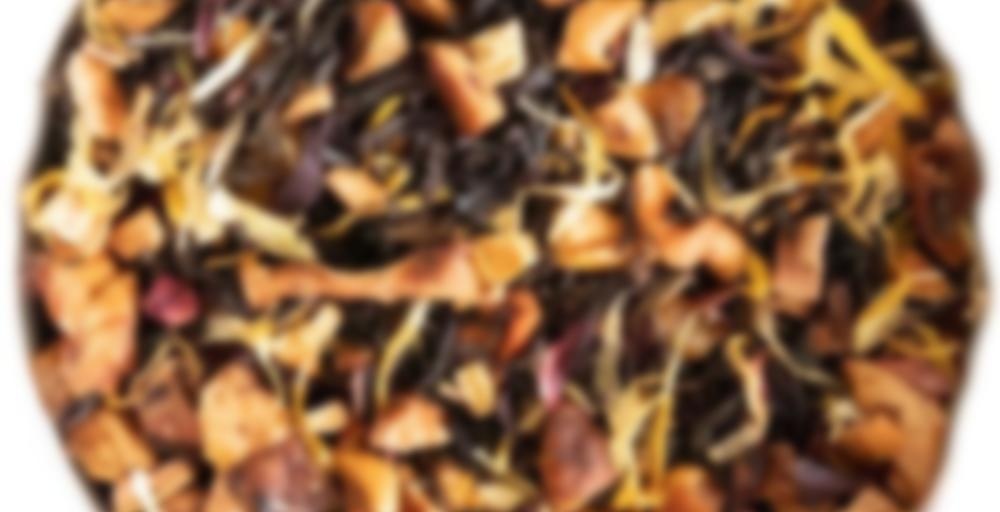 Whisk yourself away on a tropical mental vacation in exotic Sri Lanka with this exceptionally infused tea. Raised to succulent tenderness in the low regions of Sri Lanka, this tea retains its tropical properties which are blended with mango, papaya and pineapple for a flavour explosion that is certain to delight you. Ideal for making ice tea, this stunning dark pink brew welcomes you with the delectable aroma of baked apple. Blended with real dried fruits including banana chips and mango dices, this tea infusion presents a revitalizing and sensational taste of the tropics featuring pineapple, apple, and mango.

So. Much. Hibiscus. This sounded like the kind of fruity, tropical blend I would really enjoy but it just tastes like black tea blended with hibiscus.

Oh goodness, I really wanted to like this one but I just don’t. It has so many potentially great flavors – banana, apple, mango – but all I can taste is the hibiscus. It’s also very bitter, but I should have known better than to steep a black tea as long as the bag suggested. My husband finished this one for me. He enjoyed it, but he loves hibiscus. I usually only like it when it’s cold and definitely not when it’s mixed with black tea.

WARNING TO THOSE WHO HAVE TEAKRUTHI’S HIBISCUS TYPE BLENDS:  They might have living bugs in them.
So a couple days ago I was going to steep up some of So Berry and was trying to pick out some of the hibiscus in my hand before putting the rest in the infuser.  I saw a tiny brown three segmented bug on my hand, looks kind of like an ant or tiny termite.  Thought it was a fluke.  Then there was a second one on my hand, so it was definitely coming from the pouch.  My pouch of So Berry was ordered in March.  Since then, I’ve been emailing the wonderful people at Teakruthi.  Then got curious just a minute ago and wanted to test the other teas.  My method:  I poured the tea pouches onto a paper plate, agitated the tea, and then kept it still for a minute to see them start crawling around.  The hibiscus focused blends from March had at least a few bugs before I stopped counting.  This one was particularly bad.  It was crawling.
From a March 2020 order, these pouches have bugs in them:  Summer Isle,  So Berry, Serendipity and Ceylon Peach.  I feel terrible giving Teakruthi this news, because they are otherwise fantastic.   But I drank these teas… with living bugs actually living in them.  This is disgusting.  Serendipity I luckily didn’t even open before today, so I KNOW it isn’t a problem from my end of things.  I’ve never even seen these bugs before.  I sent some of you guys these teas!  Luckily not these four.

I tested ALL Teakruthi’s blends that I still have, by pouring on a paper plate and observing.  From what I can tell, these teas are FINE:
Original samples from 8/2019: Ceylon Emerald, Lemon Kandy (though there was a big piece of what looked like pocket lint), Vanilla Earl, Colonial Mornings, Afternoon Ritual, Zen Mint, Ceylon Ivory, Majestic Chai
From 3/2020 order that were FINE: big pouch of Lemon Kandy, big pouch of Ceylon Emerald, Wild Monsoon, Southern Malt, Cinnamon Chai
I hate bringing anything to light that is negative about the great Teakruthi BUT I also don’t want my Steepster buds to be drinking living bugs.   They clearly have a production problem, at least with these four blends. BUT they do say they make really fresh batches, so the problem might already be solved by now?  I HOPE SO.   I’m also glad Teakruthi uses very thick quality, fully sealable pouches because if I had a bug infestation in all of my teas, I would be pissed. I know I’ve been lucky with the thousands of teas I’ve sampled, I think I only have found a tiny bird feather in one of them before. So yes, very lucky. At least I didn’t say this tea was the most delicious tea ever?  I guess I could taste the bugs. :/

That’s sad news indeed. Hopefully it is resolved today and they will terun you money spent or send you new pouches of teas!

I just want them to make sure the problem is fixed so no one else has to experience this. I don’t think I’m that picky, like if I’m outside and a bug lands in my mug, I just remove the bug and keep drinking. Others might just dump the mug. But I’m not a fan of the bugs actually using tea as their home for months. I always wondered if bugs could live in sealed tea pouches. (shivers)

I hope they get this resolved. I like Teakruthi as well, but bugs are a step too far.

Commenting here for those who may have ordered from Teakruthi more recently. You might not be in the clear. I went through the teas from my recent order and also found small bugs in my bag of Serendipity (Crafted on August 10, 2020). I had a bag of So Berry as well, but by the time I checked it I only had a cup’s worth left and I didn’t see any bugs. I don’t know for sure if there were bugs initially, but it was also dated August 10, 2020, so I have my suspicions with the hibiscus.

I used a similar method as tea-sipper – pouring the full bag of tea onto a large piece of parchment paper, spreading the tea and shaking it a bit, then waiting a few minutes to make sure I didn’t see any movement.

Quick update – I forgot that I also bought a green tea from teakruthi, Shakti Veda, crafted on August 10, 2020. I was certain it would have the bugs too, but after staring at it for a good five minutes I saw no movement. This gives me hope that maybe I didn’t drink bugs in my bag of So Berry after all.

egads, with a difference in five months between the order dates between Shae’s and my order of Serendipity, this is definitely an ongoing problem for them.

(And I’m very sorry about the bugs, Shae)

If it weren’t for you telling us here, I probably wouldn’t even have seen them. So thank you!!

This is part of the response I received from teakruthi after a few days: “We just went through all our stock of those teas and reached out to a few other customers, and so far no other hits have come back. Truly apologize you had the experience.”

I REALLY hope they overhaul production or storage or whatever part of the process these tea loving bugs are finding their way to teakruthi.

This was my e-mail from teakruthi today: “Thanks for all your help and input. I am hoping we have this resolved now.”
I hope so too!