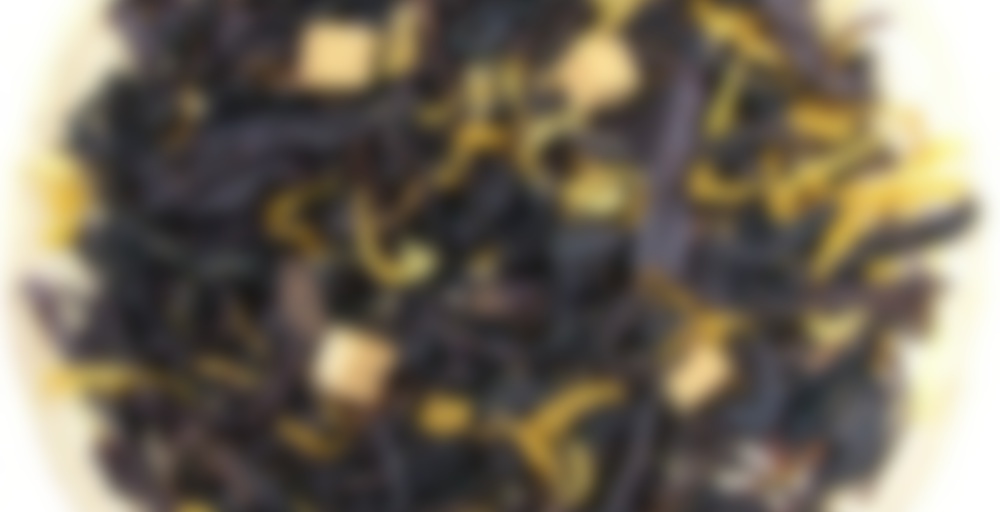 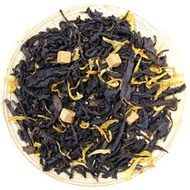 This oolong tea is a special treat with a dreamy caramel aroma. Premium Formosa oolong tea is blended with caramel pieces and marigold blossoms for an infusion with a smooth body and creamy notes of caramel.

Thanks DaisyChubb for sending me a bit of this tea.

It would appear that this tea has had mixed reviews, some like it and some really do not. I’m really enjoying it! The sweet, buttery tones of the Oolong meld quite well with the rich flavor of caramel.

It has an overall, lighter flavor and texture than most caramel teas that I’ve tried, but, I kind of like that. I do think I’d prefer a caramel flavored black tea over this Oolong, but I wouldn’t turn my nose up at a cup of this if it were offered.

Not a bad cuppa, quite enjoyable.

I’m really glad you enjoy this one! The sample found a good home :)

I was rather excited about this one – at first – then I looked at all of the THREE ratings – and they were all in the 30s!!!! Oye! I’m trying to keep an open mind tho! So…I noticed people complained about the burnt and bitter notes so I was short on the infusion. So far so good! This seems to work to almost rid those claims!

I’m tasting something creamy but not a lot of caramel and I’m not really associating this as an oolong based on flavor or feel – I wouldn’t be able to tell in a blind taste test…I guess.

It leaves a strange creamy-peach-butter-type after taste. Another strange trait is that post infusion the tea was cloudy – something I wasn’t expecting.

Not wonderful but I wouldn’t say it’s horrible either. At a gentler infusion time – like around a minute or so – this is sipable – but the flavors are conflicting and don’t really jive quite right. I’m not really a fan of the after taste but again I have had worse.

I found it to be more bearable than the other 3 people apparently but I don’t think I would buy it for myself or anyone else! I am glad I got to try it and I am rather giddy with my short infusion time that I avoided the major complaints of the other tasters.

Did a very short steep after reading the reviews – I didn’t taste the bad stuff yay!
It certianly wasn’t my favorite though. Almost a c… cardboardy quality to it, but it was still enjoyable and I didn’t have to dump it!

Actually, I know this will only be helpful to a select few, but if you are one of the people who LOVE DavidsTea’s Carrot Cake, this tea is for you! Blending them would be a neat experiment… but I’m getting almost an identical flavour profile for the base.

Very very interesting. Anyways, it’s up in my swap now! So if you’re interested, check out the swap thread!

Gah! Carrot Cake is one of my favourite teas!

if I have any left after this quick swap I’ll send it to you after I move to Halifax! :D

That would be awesome!! I’m so curious to try it now :DDD

It’s a damp, cold and foggy day so I’m just as glad to be curled up inside with my laptop and a mug of tea. There’s something about this tea that makes it suited to a crappy day like this. The dark oolong base is slightly toasty but has a smooth finish which goes well with the sweetness of the caramel. I do wish that the caramel was a touch stronger though, as it comes across more as a suggestion than a fact.

Tea #15 from the Here’s Hoping TTB

It’s been awhile since I’ve had anything from Tealish since they’re up in Canada. I have a few of their blends that I have really enjoyed, but this one just left me feeling a little meh. It’s very sweet, a little buttery, and slightly burnt tasting. There really isn’t a lot of depth to the cup, which was disappointing.

This one just isn’t for me I guess.

Had this yesterday before running out to work…no. Just…no. It tasted burnt and bitter and blegh. Hopefully I can find a way to make this bearable.

First try at this one… Not much to say other than I was struggling to finish the first cup. I don’t know why, but it looks like I’m not turning into a fan of these “flavoured” teas with random bits of things that sound delicious, but in actuality aren’t meant to be in tea…

Too strong of a sweet taste for my liking, and the aroma was almost a turn off right from the start. Unfortunately, I’m going to have to continue trying this one since I have a whole packet of it so I may revisit the review of it later, as usual.

Also, for the record, I usually love anything with the word “caramel” in it.

Hmm, no I haven’t… But unfortunately it looks like their location and method for ordering teas seems not so international friendly. I’m sure I’ll find a decent caramel-ish tea in due time.

Am not having a good oolong day today. Wasn’t sure about this tea, because my experiences with Tealish have been hit or miss. Miss. Definitely miss. No matter how you prepare it, the caramel tastes burnt and the oolong is nearly invisible. Tried a couple different steeps to see if I could take away the burnt taste and no joy. Sad.

I snagged this from the Here’s Hoping tea box when it was around. Steep #1 was the last run of my Bodum kettle. Steep #2 was microwaved. This one doesn’t seem to get much love from Steepster, but I like the idea of a caramel Formosa oolong. This was actually what I expected it to be. I liked it! There is a darkness to the oolong that pairs well with the sweet and creamy caramel flavor. The name is entirely accurate. The Formosa here seems like a lighter black tea. The second cup was even tastier. Plenty of caramel to go around. I guess I’m such a tea addict I like teas that most others do not.
Steep #1 // 8 min after boiling // 4 min
Steep #2 // just boiled // 6 min

I’m writing this tasting note under this tea even though I think it might have a new name, “Dulce De Leche” — not sure if it has different ingredients, but I think it’s the same tea. I love the little caramel pieces in the dry leaf! The scent of this cup is very sweet with just a bit of oolong peeking out.

Sipping… I’m surprised that the flavor of this tea isn’t that strong. I do taste caramel and it’s a very nice round caramel flavor. It’s not only sweet, but has that buttery, milky character that makes caramels so delicious. I’m impressed that this flavor can be present in a tea! What I don’t like about this cup is that it’s rather drying and sharp. The oolong doesn’t really seem to contribute anything to this blend, only that drying quality with a hint of wood. Sad, because this tea has such potential to be delicious!