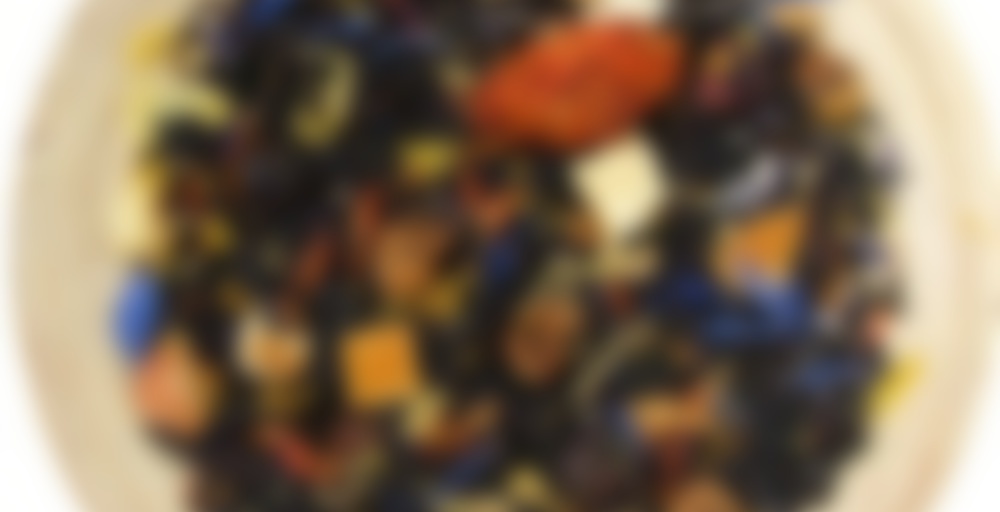 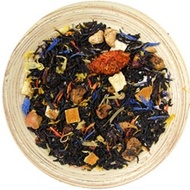 A cheerful black tea blend with loads of colourful ingredients! Blueberries, cherries, raspberries, oranges, blackberries and cranberries are combined with blossoms for a taste that is as unique as Toronto’s Queen West neighbourhood, home of Tealish. A fruity black tea with a smooth finish.

This is a strange one. Its like this cross between a wonderful smell very similar yet again (second time I have tried a tea that smells like this today) of Strawberry Zabagilone, and yet there is this icky smell lofting in the background (rotted fruit?) . I can also smell the creamy flavor in there. I want to like this as I pick up on many good flavors but yet something is off with this tea.
I think as others have said – they just tried to do far too many things with it. Perhaps there are blend masters who can in fact go all out like this but I am not thinking Tealish hit the mark here.
Its just weird!
And you know what – I am getting a peppery flavor too which actually I kind of like but it does not make up for a serious LACK of flavor in the tea overall.
Sometimes I get a slight hint of something yummy then I take another sip and its dishwater – not that I have actually drank dish water, but ugh this one is getting dumped just because it is freaking me out.
Sorry.
<3 Love to Indigobloom for sharing this with me regardless.

ahhh so many misses from my pile! lol

Oh trust me, there were lots from the samples I sent her too! But a couple hits for which I am happy :)

LOL I am dying laughing here – am I just hard to please?

nah, but it makes it that much sweeter when there’s a hit! ;)

LOL well thanks I am POSITIVE I am going to absolutely LOVE some of these! And the strawberry one WAS a hit (forget the name right now) but it was so much like 52Teas that was the only real drawback but it was VERY good :)

heh, funny how that happens sometimes. I can’t help but compare certain teas and pit them against each other in my head!

I always do that, and more than just in my head :D It’s all over my tasting notes, haha.

yup, I finally got around to this one!
After reading all the reviews already posted I was not looking forward to it so much. However, it’s better than I expected. Berries dominate the cup, but I also get a sort of creamy texture in it.
The second steep was harder to get down. I added agave and milk just to see… and it was nice that way to.
Overall though, it was pleasant enough for me to drink up… but certainly nothing that stands out in the tea crowd. I think there is just too much going on with it!
Also, I am oh so very very tired. Too tired to write the other ten reviews I have backlogged. Oi!!

I seem to be disagreeing with the majority here. I really like this. I don’t always get a lot of fruit flavor from flavored blacks. This one is really fruity. I get mostly berry, but there is some citrus in the background. Yep, this works for me. I’m going to hot steep and then cool the next cup and see how it is cold, but hot, it gets a thumbs up.
Thanks scribbles for sending me this sample, really like it.

everyone’s palate is unique. this one didn’t work for me, but it must for some else it wouldn’t be available. yay scribbles!

I think I have an oddball palate. I seem to disagree quite regularly to the majority here. Oh well that’s what’s so interesting about this journey….

This is a nicely-done fruity black, a type about which I can be picky. I appreciated the substantial-but-not-bitter black base, too. But, I agree with the other reviews that say it’s just kind of underwhelming. I don’t think anything about it is memorable. In fact, it just made me want to drink a cup of Notting Hill from Yumchaa for a little more fruity kick! I expected from the scent and the ingredients list that this one would have too much going on, and I think that is the case. While the fruit flavours are nice, they all just blend together.

LOL, look at the coincidence, I was drinking a cup of Notting Hill last evening and really enjoying it.

Too funny! Notting Hill is so lovely. I’m missing it as I’m trying to save what I have left. I was planning on placing a Yumchaa order soon but am now waiting to see if there’s another trip to London in the works. If so, there will be some serious re-stocking!

Oh I so have that problem, I try to save bits of my favorites, hoard them for ages, till they loose a lot of taste :( Spoil yourself, and here´s rooting another trip is on the works for you (if that is a good thing of course!).

Thank you for the go-ahead! I think I might spoil myself. I hate to let tea lose its flavour. Not the best tactic. Another trip would indeed be a good thing, and would probably leave me with lots of free time for tea purchasing!

Sipping it now…and contemplating…these first few sips make me wonder about it. As always, so far, thanks Azzrian.

Smell: It was kind of fruity, but also a bit weird since all my teas are in one place, so I smell a lot of just…tea. But this did have a cranberry/other berry/kind of orange-y smell. Steeping I smelled more orange than anything. Not strong citrusy orange, but the smell of orange when you bake it in something, kind of.

Taste: I taste cranberry a bit, though that may be raspberry, or both, though I definitely taste raspberry and orange. It’s light orange, but orange. It says blueberries, but I have yet to recieve that. And blackberry, I can taste that sortof. The cherry isn’t that strong, which for me is good, because I do NOT like cherry. more sipping It’s all very light, but I like it personally. May have to get a bit more, so I can have a few more tries with this one….I think I only have enough for one more cup. Over all, I think it’s yummy!!

argh… i am experiencing tea guilt on two fronts: 1) this sample came from my dedicated tea buddy scribbles and 2) i really wanted to like this blend because it’s canadian and i loved the ingredients list.

i tend to like my teas robust, so 1.5 tsps for a steep and steeping for 5-6 minutes. now the smell of this one is excellent when it’s dry! but that’s where it stops. 6 minutes later the tea is weak, the scent that had appealed has vanished. i get a hint of fruit, no hint of the black tea and a heavy stickiness on my tongue from the caffeine (which to me translates as a rooky mistake in processing).

having tried several teas i am fairly comfortable saying i think tealish is great on the idea front, but seriously lacks in their follow through. sadly their teas all taste predominantly the same.

the caveat i will add to my review is this: i am recently out of surgery and things have tasted off to me. while i will not be finishing this cup of tea (yes, it is that bad… guilt guilt guilt) i will try it again in a week or so and review my score.

took another sip…. nope, won’t be finishing the cup. i am going to retreat to the comfort another of the favourite samples that scribbles sent to me…… bluberry jam i think.

This was my cup for work today. I loved how it smelled, all berry-full and delightful. And I know I enjoyed every sip I took. But now a few hours later I can’t remember much of anything about it to describe it in detail. Apparently I agree with everyone else about it being unmemorable.

So this was in a little DavidsTea bag simply labelled “Queen West”. It’s from when the Toronto Tea Party still existed and we bought a 50g bag of this to split.

I don’t hate it! It’s rather good, but…underwhelming. Just kind of meh. Basic fruit with basic cirtus. I can’t really pick out any specific flavors. It’s a nice cold brew, but not worth restocking.

I was more than half-asleep when I made my morning cuppa. I brewed this at the same temperature I did for greens, and then forgot about it for ten minutes. I was sure that I had ruined it, but it was surprisingly not bitter! A little cold.

What else can I say? It was pleasant but forgettable, a nice little caffeine boost in a tasty package, but I didn’t linger over it.

Another sample from Tealish. Not really sure what to think about this one. It definitely needed sugar. I’m getting a lot of berry flavour in there now. Also a little hint of orange. It’s a very fruity blend, that’s for sure. But other than that, it’s a smooth black tea packed with lots of fruit. Pretty good.