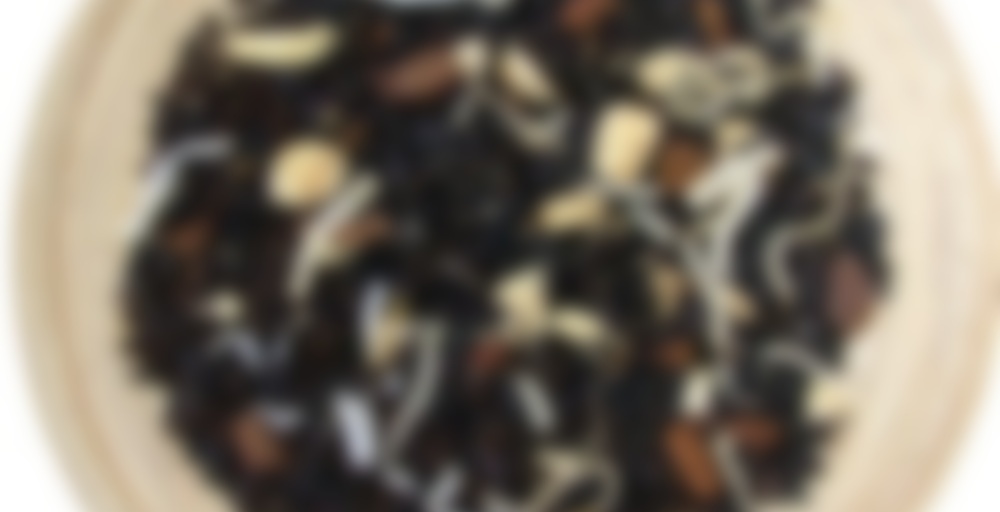 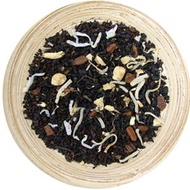 Coconut Cream Chai makes a delicious chai latte! For directions on how to make your own delicious lattes with loose leaf tea click here.

Sipdown!
Made the mistake of mixing this one with a chai that had rooibos in it. Made it way too sweet!
This is one of my fave chais though, I’ll be back for it!

Thank you to Indigobloom for sending me a sample of this tea!

I had dinner tonight with a friend at Herbivore and got the chick*n mole with rice and beans and an iced tea. I wanted to get some reading done but I’m sooo tired for some reason. I thought this might perk me up.

A lot of people seemed not to like this too much but I like it fairly well. It seems more like a dessert tea than an actual chai, however. The black tea base seems kind of sweet and I am getting a lot of vanilla here as well as the creamy coconut There’s a touch of ginger in there somewhere. I did add some soymilk to mine but I prepared it the old fashioned way, in the For Life teapot.

I usually have chais as a dessert tea anyway, so this would be fine by me.

Herbivore’s menu looks awesome-so nice to be able to order anything you want without having to ask lots of questions! I probably couldn’t even decide what to order. Do you ever go to Millenium?

mmmm Herbivore sounds amazing!!
So glad you like this one Amy, it def is an interesting combo

@ScottB- I didn’t see your question until just now. Yes, I have been to Millenium quite a few times but it is much more posh and pricey than Herbivore. I was at Herbivore today and got the scrambled tofu – good times!

Amy-I’ve heard vegans visiting SF like to make a pilgrimmage to Millenium. You’re so lucky to have a casual vegan and upscale vegan place to dine. The fanciest all-vegan restaurant I’ve been to was Karyn’s on Green in Chicago-but it’s probably not as good as Millenium.

Dry, this tea really doesn’t smell like much. Steeped, it smells like a fairly standard chai. Perhaps with a bit of creaminess.

Hmm, ok, while I think it could have used an extra minute or two, it’s good, albeit rather weak! I can taste the spices, although they are rather subtle with only 3 minutes of infusion time, but there’s a lingering coconutty creaminess which is nice. I don’t usually like chais without milk/sugar, but this one might be an exception.

Not a tea that I think I’d rush out and buy (mostly because I have tooonss of chais right now), but it’s nice! Thanks Indigobloom!

ETA: Second infusion for five minutes definitely tastes less creamy, and stronger. I’m getting an orange flavour, but that might be from something I just ate. Will have to wait another moment to try… Ok, this infusion tastes much more like a regular chai. Maybe there’s a bit of coconut/creaminess at the end of the sip, but not a ton. Not bad, but I don’t think we’ll continue to a third infusion tonight. I want to try more teas!

haha this one def works better with some sort of milk, in my opinion! funny I found them overbearing otherwise. I hope I didn’t short you on the spice!

Doubt it. I think my infusion time was simply too short!

Thank you to DaisyChubb for sending me some of this tea. I am really glad to be able to try it.

I find myself wanting just a little bit more from this chai… The cinnamon and ginger seem to need an accomplice… cardamom or cloves or both. It just is … lacking in the spice department, and while I acknowledge that chai means tea … in Northern America I think we’ve come to accept chai as meaning a spiced tea or tisane… and this tastes seasoned but not spiced … if that makes sense.

The coconut and the cream part of this is really delicious though. And this makes a really yummy latte. I just feel like the spices were overlooked. It is good, but it could be so much better.

Hrm. I guess I really am picky about my chai. This was ok. Just!
A little too sweet for me, in a way that I’m having trouble pinpointing, and that I could have seriously done without. Maybe it was the combo of vanilla bean and cinnamon? It was so odd. Like a chai gone stale. That said, I certainly don’t hate it. and I do love that the tea leaves were processed ctc style! Certainly a drinkable cup, and loads better than Tetley :) The coconut aspect was lovely but I can see now that it really doesn’t belong in my perfect cup o’chai. Or so it seems!
Anyhow. Based on the first infusion, I’d have given this a 75. However the second steep mellowed out considerably. I really enjoyed that one! so it’d get an 85. Thus, I’ve chosen 80 as my rating.

You’re welcome to some of mine! :)

I would love to try some. Coconut is one of my favourite tea flavours. :D

Okay how did this fall off my radar?! Oi… I am silly!

Oh haha, I had forgotten too!

Another sample from Indigobloom… thank you Indigo!

Something about this blend really comes across as ‘off’ to me. We gave it the full five minutes, but it is a CTC, so that may have been overkill, and be part of the problem with the overwhelming MEH! I get from this tea.

So… yeah, glad I got to sample it (thanks again, Indigo!), but I don’t think this is a keeper.

To be fair, I did give it a lower rating than anyone else.

Dry, this smells pretty coconut-y with some sweetness and only a hint of spice. I steeped it for 4 minutes, and enjoyed watching all the coconut shavings swirling around. I tried a sip straight up, and decided that it definitely needs some sweetener. Added a load of milk, and threw in a bunch of rock sugar and found it to be much nicer. I don’t know about this one. There is a scent in the mix that isn’t working for me, and I’m not sure what it is. I like coconut, but I also like a spicier chai, and this one is really bland. I’m getting lots of coconut here, and if they had amped up the spice level a bit more, I think this could be a clear winner. That being said, it is still an enjoyable cup, nice and creamy and coconut-y, so if you like a smooth, blander chai and lots of coconut, then this would be a good choice. As far as the spice levels go, I was generous with the amount of tea per water, so I don’t think this is something that could be fixed with more tea. Maybe if they had added some cloves to the mix?

When I saw this tea I was really excited…coconut AND chai!!! I thought this was gonna be fantastic. Reality? I am really glad I didn’t send out any of this in swaps because I’d never be able to log on here again.

To me the dry leaf smell reminds me of horses. I don’t know why or where or how, but I think horses when I smell this tea. I love horses, and I really miss riding. But I don’t want to drink a tea that reminds of horses. I had The Man smell it and he said he smells sweet spice.

Despite the dry leaf smell I proceed with brewing and drinking. I added almond milk and sugar, and it was ok. I’ll finish it. At some point. Maybe. If don’t have anything better to drink (unlikely).

Tried this one tonight, brewing it up in my glass pot. The base tea is lovely, not too harsh or astringent and great for blends. The blend itself however I found lacking. I didn’t get much cream at all, or chai. I felt like it was a coconut black, and since I’m not a big pure coconut fan, it was a disappointment. Guess I’ll go back to the coconut oolongs!

This was not one of my favorite chai’s. I think i’m just not a chai person… I did however like this one iced.. maybe its because its summer…. I don’t know, I have saved a little bit so I can try it hot when the weather gets better, but I found it a little bland. Although the coconut did add a little something to it which made it a little creamier and sweeter.. I did like that aspect of it!

oops ha ha.. i didn’t even notice i did that! … lol i rated a bunch of teas this weekend so i must have got mixed up!