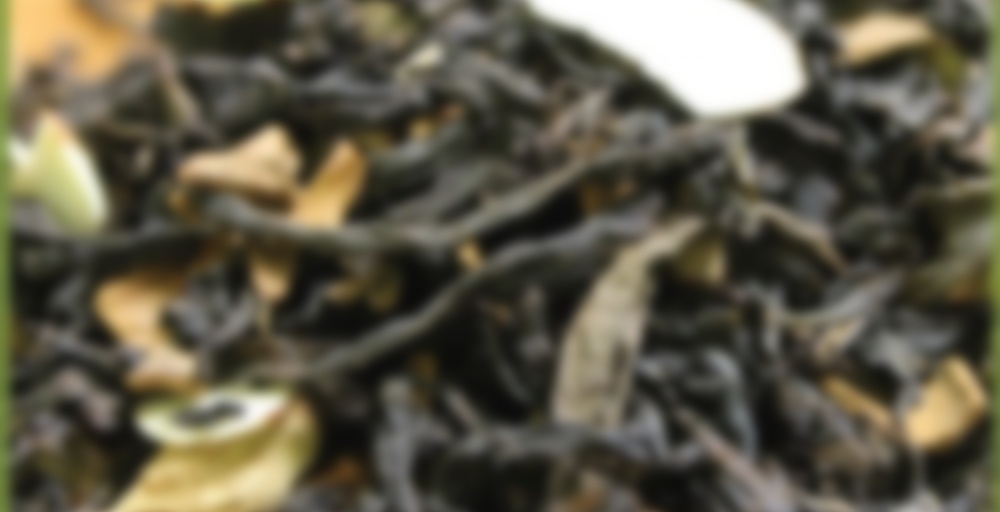 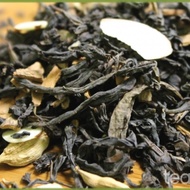 A wonderfully blended tea that has a hint of sweetness, but it depends on its more earthy nutty type flavor to please the palate of tea drinkers who insist of quality and consistency. It is a rich bodied tea that has just the right amounts of cinnamon and cardamom with a swirl of almond flakes, all lightly dusted with the right essence to create a lingering but not an over bearing taste. Only the finest of organic oolong tea is good enough to act as the base for this fine mixture of ingredients that work nicely for any time of day or night.

The other head of the household is not feeling well tonight so I offered tea. “Whatever you like! Anything! I’m a buffet of tea!” Now of course you hope that when she says “chai” you actually have some. This is the last chai in the house. We must remedy that. Anyway, we killed off another sample. I only had two cups worth so we shared it. She had a giant mug and I had the resteep. Not sure but I might have had the better deal.

I must replace this bag. Chai must be represented in this household, it was the first type of tea we liked simultaneously!

Thanks for this generous sample, Dexter3657

WHAT!!!! am remiss about keeping up-to-date ’bout star stuff. Now need to search what happened. Too young!!!

Starting my morning with a cup of chai. It was my last night of house sitting for my parents and I can’t wait to go home and see my cats….my husband too (but mostly the cats lol).

This raw blend smells strongly of cardamom and something hot like pepper, almost makes me need to sneeze. Just looked at the ingredients and pepper was not mentioned but it does say natural ingredients. It might not be pepper, it’s just something very dry and spicy hot…perhaps very strong cinnamon instead. No idea.

With Chai I have a splash of milk and one spoon of sugar. Flavour is not overly strong which in a way is disappointing. The cardamom is the most dominant flavour with a toasted Oolong coming through in the after taste. A touch of cinnamon comes through but again as a whole this is a very mild Chai. I really don’t think there is enough depth or ray of flavours for a true Chai.

I can at least say the cardamom lifts it from being too dark and Oolong and since it’s not that strong there is no ick factor. It’s an average Chai.

I thought a dark oolong chai would be interesting. I don’t see those often! This one isn’t bad, but I think there should be more flavor. There was a big almond slice in my infuser (I didn’t know almonds got that big.) Well, there isn’t much of a nutty flavor. And it doesn’t taste much like chai either, but I’ve found that usually if a chai is mixed with a base rather than just a mix of spices, the spiciness isn’t very strong. (With one exception being zentealife.com’s Energizing Chai that is mixed with pu-erh and yerba mate.) Looking in the infuser, the oolong leaves are both green and brown, so its like they mixed two kinds of oolong. That may be why the flavor is a little odd to me. There is a tanginess to it that I don’t love…I kind of expected a roasty oolong with nice complex flavors.

This is a FUN little tea. It’s not my beloved, I’m still in mourning because I can’t get it anymore Creamy Nut Oolong, but in the same family.
I like that this is really light on the chai flavors, there is really just a hint in the background. It really lets the nutty, woody, oolong come through.
The second steep was even better for me. Even less chai, still there, but really subtle. The oolong is really coming forward now.
I might have to reorder this. It could become a cupboard staple.

I got this lovely sample from the extremely generous Dexter3657 – Thank You so much for this tasty treat.

This tea is not as strongly spiced as the dry leaf smell would indicate. The spices are light and complements the nutty earthiness that this tea offers.

I really enjoyed this tea, despite the spices being a little on the light side for my preference.

I find teas relying on almonds tend to either have a light, true almond taste, or have a very sweet amaretto bent to them. This is an amaretto tea.

Steeped, the amaretto is subdued, thank goodness. It tastes like a mild oolong with a hint of sweet spicyness (the cinnamon, mainly).

Overall, it’s drinkable, but nothing special. I wish they’d offered a sample size. 50g is going to last me awhile.

This one I got out of the EU Travelling Teabox (round 1). At first I wasn’t even planning to try it at all, but then two things happened.

1. I found myself rather forced to take some more stuff out, because I couldn’t tetris everything into the box and close the lid.
2. Scheherazade shared a couple of bags of surprisingly pleasant (well, it surprised me) chai with me, so I thought why not?

The more I thought about this one, the more appealing I thought it was. Nuts, you know. :)

I’m trying it tonight while I’m home alone and rather need something warming. I haven’t quite reached the point where I can only stand peppermint herbals yet, but let me put it this way. In the last 48 hours I’ve watched 23 episodes of As Time Goes By. I think that speaks volumes about my current health, really. I’ll be taking season four with me to bed as soon as I’m finished writing this.

I don’t usually like milk in my tea, in fact I tend to generally be of the opinion that milk and/or sweetener is just ruining the cup (especially the sweetener, blech!), but I’ve come to understand that I really do need it there in a chai. Otherwise it seems unfinished, somehow. Even so, I’ve got a few mouthfuls of this in a second cup without milk, so that I can taste it unadulterated.

I’ll start with the non-milk version. As it was the dregs of the pot, it’s gone a bit bitter. It smells very cinnamon-y but it doesn’t have an overwhelming cinnamon taste. Mind you, I can’t taste any nuts either but that might be the dregs-y situation’s fault. If it hadn’t gone so bitter, it does taste like it would be really rather nice.

As for the milked cup, I fulled the mug about a quarter up with milk and nuked it. I am too damn lazy for saucepans when it’s such a relatively small amount of milk we’re talking about. Then I poured the finished tea into that, and this does smell quite nutty. And milky. It only lacks chocolate and it would smell like hot nutella. I can detect the cinnamon as well, but it’s even more discreet here than without the milk.

It’s not at all bitter with the warm milk in. It’s very sweet, actually. Partly I think because of the nuts, and partly because of the milk. (Seriously, next time you have a glass of milk, pay attention to it. It really does have a sweet taste to it) The spices are very low here, as is the base tea, so I pretty much feel like I’m drinking warm nutty milk.

Which, actually, is really rather nice. For all the lack of base tea and spices, I strongly suspect that I would notice them NOT being there, so I don’t think they’re completely invisible. They’re just… background noise. Rounding everything out. As the cup cools the spices come in to play more, but still mainly as an aftertaste.

I’m glad my tetris-inabilities forced me to pilfer this one. It’s really very pleasant. Perhaps I can learn to enjoy chai. It’s just a question of finding the correct chai.

This was showing up that I had it twice already in my cupboard but I don’t remember it. I didn’t leave a tasting note either that I can find. How strange. Perhaps because the oolong doesn’t really stand out in this tea. I think for me (I don’t like Chai too strong) the chai flavouring is done right. Brewed up it smells kind of like coffee cake but the taste is different. I’m picking up a nutty chai flavour with a creamy oolong base. I added a bit of coconut milk to the 2nd cup and it seemed to bring out the chai/nutty flavour a bit more but it wasn’t a big difference. I’m really enjoying this tea but not enough to want to buy more once my sample is gone. It could be because I normally don’t like some of the chai teas.

Smells wonderful and nutty in the package. I don’t think I steeped it long enough though, or maybe I just haven’t figured out how to drink anything chai. I couldn’t taste the nuts as much as I was hoping. I’ll steep longer next time.