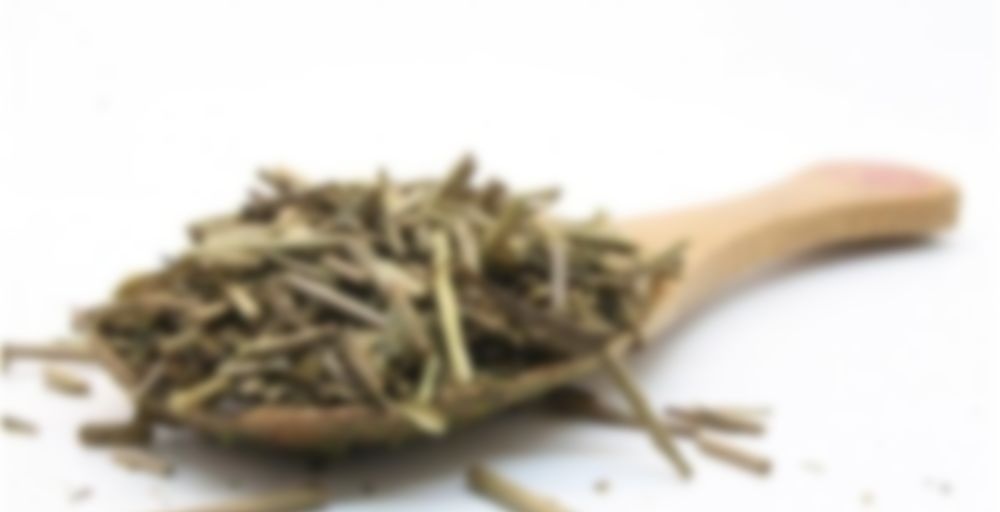 An excellent organic hojicha from Gokase Town in Miyazaki which is made from a selection of pan-fired ichibancha (first flush) stems and leaves that are lightly roasted in order to achieve a hojicha of exceptionally fine quality with outstanding aroma and the smoothest sweet-roast nectar!

The fine aromas of this hojicha come from a combination of pan-firing and complex roasting of the leaves. This combination produces aroma that is quite different from steamed tea leaves that have been roasted into hojicha, and to us, also superior. The aroma offered is more refreshing, more stimulating, even a little flowery, without any excessive smokiness or roastiness.

On the palate this tea is a complete purist’s delight, it is as smooth as you like, and offers a bouquet of wonderful stimulating sweet-roast flavors with a touch of greenness in the mix!

Hmmm, this is not what I expected from the dry aroma. In the bag, the tea was a lovely toasty pile of stemmy pieces. The almond cookie notes are what inspired me to brew this on a Sunday morning at 7 am. When it was covered in 175F water, though, a very intense roasted buttery corn scent filled the area. It went from the appeal of a dark toasted oolong to hot wet movie theater fare in a heartbeat.
After apprehensively pouring the liquid out of my little teapot and into a big pottery mug, I immediately disposed of my leaves because I didn’t think I could stomach another cup of that stuff after this one. The liquor came out of the spout as a deep amber, and the aroma was slightly more straw-like and less Flavacol-saturated popcorn (a definite relief.) My first instinct after tasting the hot brew was to spit it back into the cup because my taste buds didn’t know what do to with it. (I did not because I had just eaten an apple and didn’t want any of that in my cup with this stuff. I persevered.)
After getting used to it, though? And letting it cool a bit so the steam isn’t punching me in the face with that popcorn aroma? Much better. It’s a very dry, savory tea at the start of the sip and yeasty in the mouth. Lots of freshly baked bread notes. If you’re looking for a tea with natural sweetness, this isn’t it, as it’s purely savory with the exception of what could be a jam note but feels like tomato-y rosehip in the aftertaste. It was easier to finish than I expected and I think that this would hit the spot for anyone who prefers dry, umami teas without any vegetal notes. I can’t fault it for the toastiness simply because I’m used to naturally sweet teas with fruity tones.
Not my personal cup of tea, but it’s well-rounded and worth trying.

Drinking a mug of this currently, though it’s now gone cold because I had sort of forgotten about it. I’m trying to finish this one off at the moment because I just got my Camellia Sinensis order and I added a lot of Hojicha to that order and I really don’t need two on hand…

My breakfast this morning is a Peanut Butter and Banana Crepe topped with salted peanuts, from this local crepe place. I swear to God delivery crepes are kind of the best thing ever. I mean, screw ordering in pizza – this is where it’s at! It’s also a really smart food pairing with the Hojicha because the tea already has a nice, pronounced nuttyness to it and the addition of both peanut butter and salted peanuts really exaggerates that in a truly lovely way. The roastiness is also just very complimentary overall.

Apart from that general overall nuttyness and roasty quality, this tea also has the faintest caramel/honey notes and a surprisingly fruity/jammy undertone. I do very much enjoy this Hojicha and when it’s gone that will be sad but Hojicha doesn’t tend to be too drastically different overall from company to company, so I’m sure I’ll love this new one quite a bit too.

Tea from a friend. I really just wanted to try this before passing it on to another friend i know will appreciate it more. This isn’t overly roasted….obviously it has that similar hojicha taste to it, but it’s light and doesn’t have that heavy feeling that a lot of hojichas do for me. there’s a bit of sweetness to this as well, though i don’t get that familiar “green” taste coming through. not too shabby!