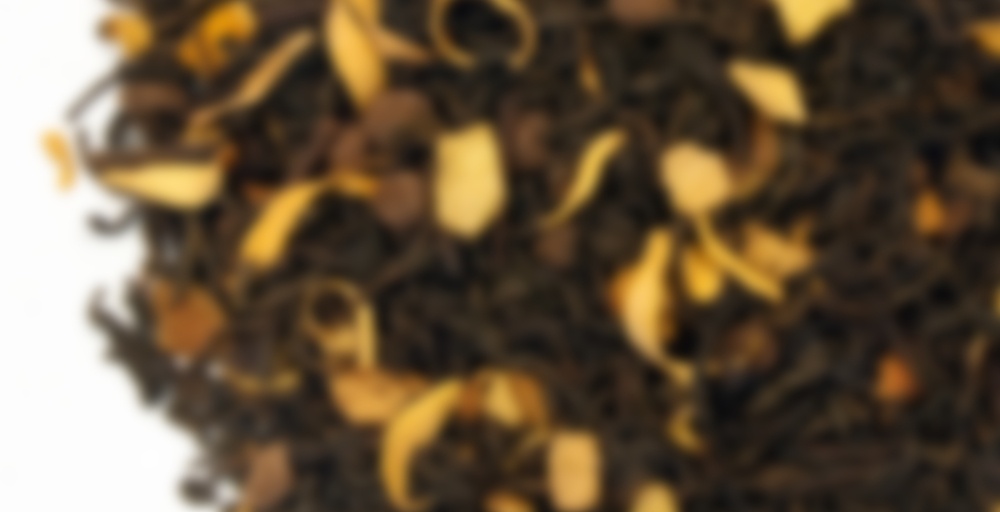 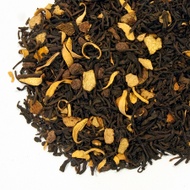 Mmmm yes this is great! I love how natural it tastes, esp compared to the DT counterpart.
The base is better as well, less fishy and more flavourful.
With milk and agave, this tastes just like chocolate milk, only a Terry’s Chocolate Orange version. Milder, obviously, but still SO good!
However, now that I’ve fallen in love with the Strawberry equivalent from STE, I feel obligated to lower the rating a few points. This is great… but not fantastic like the berry version. On the other hand, it does hold up better without any additions, which is a serious plus in my books, as I don’t always have the option for tea a la dairy! (I sipped before adding milk)

Interesting! I tried this as a tea-to-go once, and found it totally inferior to DT’s version. Like, barely any flavour. Huh. Now I am curious to give it another go.

That doesn’t surprise me! I find that while DT is consistently average, Teaopia has a greater range for quality. Sometimes they knock it outta the park… and others, it kinda stinks!

Thank you IndigoBloom for this generous Sample!

My first evah Pu-erh was DAVIDsTEA Chocolate Orange. I fell in love! As time went on…I learned to adore unflavored Pu-erh, Pu’er, Puer, Pu’erh’s! (You get what I mean!)
True love none the less. I now drink less flavored Pu-erh but on occasion I go there for a dessert treat and I like to bottle it to drink cold. Pu-erh is wonderful for controlling your food cravings when you need to drop some pounds.

When I steeped this new flavored Pu-erh, I could smell a spiciness even though there isn’t spice added. The orange blossom and orange peel adds a little something extra to the scent. The taste is not very orangy but there is a bitterness at the end from the peel. I found a seed in my brew basket. There isn’t a typical musty, earthy Pu-erh flavor either. The dark chocolate, coffee and orange blossom-vanilla flavor make up the cup.

To compare this Pu-erh to DAVIDs would be way off. They are so very different. Only the name is close like two people with the same name from different Canadian families.
I still prefer my first evah Pu-erh.

This is a good flavored Pu-erh (sans seed) though. And, Teopia is the ONLY Canadian Tea Company I’ve ever actually been inside of at Metropolis Mall in Vancouver, B.C. last Sept. Fantastic Service!!! I bought my first loose leaf tea in my life there, Pumpkin Spice!

A seed?? LOL
Hmm, sorry bout that. Quality control is down in Bloom land… :)

You probably spit it in there huh! It was a big fat Canadian seed too! (Do you even grow oranges in Canada?)

Thanks to Indigobloom for this sample!

I had a pretty rough/emotional evening yesterday, which turned into some depressing nightmares, which is what I’ve been left with this morning. :( Nothing like starting off the day with some heartache, and feeling helpless that there’s nothing I can do to change things. Anyhow, I opted to brew up some samples that I’ve had for ages, in a (probably futile) attempt to make myself feel better.

This one made the cut, as I was looking for something a bit heavier this morning. Brewed up, it smells much more reminiscent of ETS’ Scottish Caramel Toffee Pu’erh, or whatever it is called, than the DavidsTea version of a chocolate orange pu’erh. So basically, I’m detecting delicious caramelly flavours, and really no orange whatsoever. On the sip, I’m pretty much getting the same. Caramelly yum, and maybe just the barest hint of orange. Strangely, I’m not really getting chocolate here either. I could probably be convinced that someone swapped my sample for the Scottish Caramel Toffee Pu’erh, actually (except that there were clearly orange pieces in my baggie!)

So in the end, this tea loses major points for not being chocolatey OR orangey…. however I am very much enjoying my cup of it in spite of that. Since a) this tea is unavailable now anyhow, and b) I tend to rate teas more heavily weighted on flavour than how true the flavour is to the name, I’m going to ignore entirely that fact and rate it high, because it’s very yum.

Also, I should note that I used about 2.5 tsp in my mug (~10-12oz.) to compensate for tea age. I suspect this will re-steep decently, so will probably throw the remaining 1/2-1 tsp of tea into the infuser for the re-steep to use it up. Not that I’m anxious to get rid of it, just…. sipdown! :D

ETA: Re-steep, 4 min at boiling, using the extra leaf, actually has some orange flavour! Shocking :P Still caramelly but less so, and still not getting chocolate. I’m getting a bit of the throat-scratchy feeling now that I get with the DavidsTea version… still can’t figure out what the deal with that is, since I’m pretty sure it doesn’t happen to me with other pu’erhs, but it does happen with rooibos, yet not honeybush. Hrrrrrm.

booo. I hope you’re feeling better. If you ever need to chat you know how/where to find me.

Thanks Sil :) Trying to arrange to talk to a couple people; hopefully I can manage to sometime in the next few days. Sigh!

big hugs anything I can do to help? I hope this cuppa makes you feel a little better! :(

I was a little put off by this at first, considering the King of Pu-Erh base that the tea has. The smell was quite delicious however, and I put the skepticism behind me and brewed it up. It makes an excellent iced cup, and a superb hot one as well. My only issue with the tea is that it really needs something to amplify the taste. Agave nectar, I’m looking at you.

This tea is amazing. Seriously, it is. The chocolate flavour isn’t muted or overwhelming, and the same goes for the orange. It’s a magnificent balance of flavouring, and the pu-erh base isn’t too strong, either.

To be honest, the best way I can describe it is that it’s like drinking Terry’s Chocolate Orange – no, I am not kidding. It is that good.

My only issue is that the flavour could stand to be enhanced a little bit more, but a little bit of agave nectar should be able to take care of that with no trouble.

Chocolate taste is not too over powering, neither is the orange. Just a perfect blend. Although, it does depend on steep time… If you want a strong tea, brew for longer than the brew time, even when over-steeped, it still has a beautiful flavour.

It’s… alright. I was spoiled by how amazing the Oh Christmas Treat chocolate orange tea from David’s Tea was and wanted to find a taste-alike to get me through the year, and this doesn’t cut it for me. It’s sort of floral, not chocolatey enough, and has a very strong Pu-erh taste (this is probably a good thing for a lot of people, but it overpowers the other flavours for me). It’s still nice, just not something that makes me want more. It resteeped well and my husband swears it tastes almost the same to him, so maybe it’s just me.