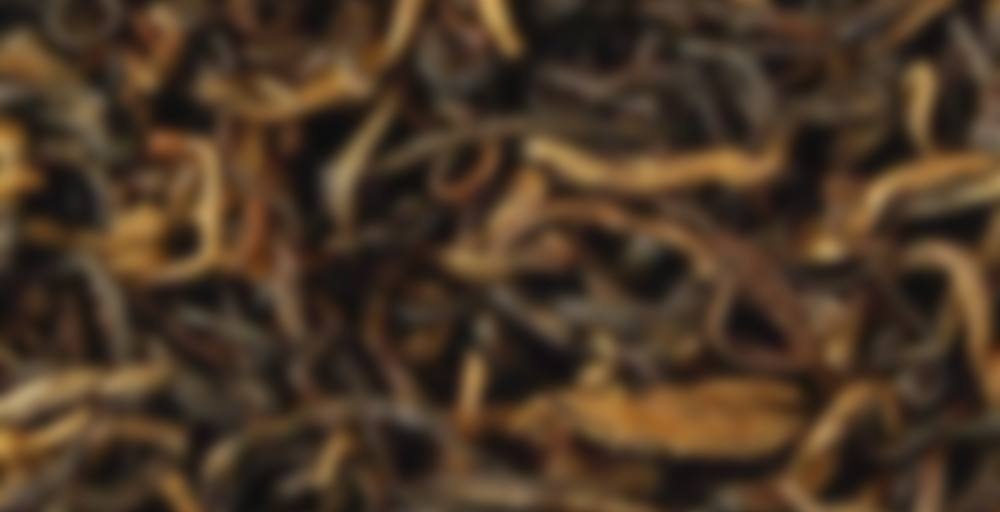 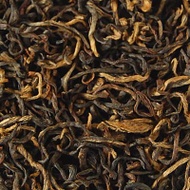 Being introduced in 1996, Zhu Hai Jin Ming is a fairly new black tea that originates from Zhu Hai, a small village located in Yixing County, in the southern part of Jiang Su province in East China. Zhu Hai village is renowned for its beautiful scenery and bamboo trees that grow in abundant quantities (its name actually means “Bamboo Ocean”). Although Jiang Su province has been a traditional black tea producing province for many years, none of its productions ever become well-known until Zhu Hai Jin Ming. In year 2001, Zhu Hai Jin Ming won the first prize for the Black tea category in the Fourth China Tea Competition. Some tea connoisseurs even go as far as saying this is the best black tea in the world. This is, of course a matter of opinion but this is a tea we believe you should try if you enjoy black teas.
Other names:
Zhu Hai Golden Tea, Bamboo Ocean Golden Tea

Taste:
Zhu Hai Jin Ming tea is smooth and mellow, with delicious chocolaty aroma and rich malty flavors. This is an excellent black tea on its own, but also blends well with sweetened milk for added flavor and complexity.

Appearance:
Zhu Hai Jin Ming is made of curled, rolled up tea buds. The appearance is similar to Dong Ting Bi Luo Chun but with golden-black tea leaves.

We are doing C25K and we’ve had our fourth run this morning. I officially hate it. It’s absolutely horrid and now my legs aren’t working properly anymore, having gone all wobbly, so I’m rewarding myself for having at least made it this far.

This tea is from the Jiang Su province, which is on the East coast of China, North of Shanghai and on the Yellow Sea. It’s south of the Shandong province which is where those Laoshan teas from Verdant are from, and I believe those are the only other teas from this general area that I’ve had before.

According to TeaSpring’s notes, some connoiseurs would name this one the best black tea in the world. Well, in my case that means it has to live up to the Tan Yang, and really, it’s got its work cut out for it there!

The leaves are rather nice looking, and they look exactly like in the picture there, all highlighted in golden brown and twisty. They don’t have a very strong aroma on their own, though, not even after I’ve breathed on them, but I am picking up something that reminds me of sweets. Can’t quite put my finger on what sort of sweets though, but it’s definitely something along those lines.

The aroma after brewing is remarkably sweet, and now I know what it was I couldn’t really place in the dry leaf. It’s caramel. Sugary and caramel-y and there’s a smidge of floral undertones to it, but the sweetness is really what I’m mostly noticing. This? This bodes well!

What a peculiar tea! It tastes nothing like it smells. Where the aroma was largely a thick caramel, the flavour is all cocoa-y. There’s something pseudo-smoky as well, hiding just beneath the surface like a hungry shark, waiting to strike at the unsuspecting drinker.

Apart from the cocoa note, I can tell there are other notes to it, but it’s like they’re all hiding, so I can’t examine them properly. It makes for a fairly complicated cup. We’ve already covered that pseudo-smoky note, and like Auggy has said, it does lead the mind in the general direction of something Keemunesque, but without the heavy grain of the Keemun. There are some grain notes in this as well, but not to the same strength.

This tea tastes a bit like it’s trying to be several things at the same time. It tastes confused and a little shy.

The cocoa note is really what carries it forwards, but there is a very nice aftertaste as well. That’s where the caramel-y tones from the aroma are finally coming in. A good chewy chocolate-y caramel, that’s what the aftertaste feels like. The way the mouth feels coated in flavour and sticky after having eaten one of those. It’s not a very long aftertaste, it doesn’t really last much longer than just the act of swallowing, but flavourwise it’s one of the best aftertastes I’ve come across.

I should have liked the actual flavour to come together a bit more. Right now it’s feeling a little all over the place and disjointed, and if it had come across as a little more compact I would have enjoyed it even more. As it is, though, it is still a very nice black. It’s definitely a suitable reward for having suffered through all that jogging.

Best black tea in the world, though? No. For me that’s still Tan Yang.

ETA: Hmm. Husband didn’t care for this one at all. And instead of just saying so, he suffers through the entire cup, nearly, and only admits it when I ask him what he thought of it. Have put a little Not Suitable For Husbands sticker on the label now and hope in the future he’ll remember that I can’t read minds.

Me? I’m on the second steep now. Same as the first, but a bit thin.

hmmm… I need a sticker like that except it needs to say Not Suitable for Parents :D

Yeah, at first I just thought it was a shame he didn’t like it because I quite enjoyed it. And then I realised that unless I made a visible note of it, I was very likely to serve it to him again without remembering.

I pretty much just assume everything in my stash is Not Suitable for Boyfriends unless it has a ton of sugar in it. ;)

We’re both tea-drinkers although he’s obviously a lot more casual about it than me, so it’s a little more complicated here. :) It’s just as well that I came up with a way to remember what he didn’t like. I spent a long time once having made myself belive that he didn’t like Yunnan for absolutely no reason at all.

More TeaSpring tea! I’ve had this twice now and the first time, all signs pointed to deliciousness but it just didn’t wow me. It was a nice mix of Keemun and Fujian-ish notes – a Keemun-y rye flavor with faint toasted-smoke but also with a nice Golden Monkey-like roundness and hint of creaminess – which logically should have made me ooh and ah and mmm, but didn’t. And that made me sad.

This morning, I said to heck with TeaSprings 2g/5oz suggestion. I wanted a big cup. So I did 4.6g/12oz. Same steep time (though technically it takes me twice as long to get the water out of the Zojirushi, so maybe it had about 10 seconds longer today but really… same steep time). Today? Yum’s and mmm’s could be heard.

It’s like the mix of flavors has changed. It’s still mostly Keemun notes of rye and malt with some toasted/smoke (which is a bit heavier now) but now instead of a Golden Monkey-like smooth creaminess at the end, it’s a bit more of a Yunnan stoutness and peppery prickle (though some of that prickle feeling could be from the stronger smoke notes). Still a full and faintly sweet aftertaste, but with a little more oomph and texture to it. And that oomph really tickles my tastebuds.

I’m much happier with this in my big mug. I can’t say I will necessarily pick this up with my next TeaSpring order though, but that’s more an indication of the massive wonderfulness I’ve encountered in other TeaSpring teas than an indictment of this one. Even when this tea wows, it still doesn’t make it to the top of my “TeaSpring Teas of Wonder” list. I think this means TeaSpring is spoiling me.

Sounds like it would be excellen for those of the Yunnan persuasion then.

Hehe, yes, I imagine so. Though I think Kemmun-type folks would like it as well since that’s one aspect that seems to stay through the steeps and different brewing.

This totally goes in hand with the tests I’m doing right now on the effects of volume. It’s turned out to be really hard to pin down just what it is about brewing in larger batches that changes qualities in a tea even if temperature, time, and concentration are kept in proportion. Most of my tests are with Keemun, Darjeeling, Mao Jian, Mao Zhen (a green tea), Dian Hong, and a slew of Tieguanyins, Sri Lankas, and Bai Hao Oolongs… I’ll prolly be adding this guy and some Fujian reds to the list now because of your post. Thanks for the inspiration!

Those tests sound interesting – are you planning to post them somewhere? If so, I’d be interested in reading them. Because you are right, there is something that changes the flavors (or can change them) when brewing at different volumes (though the same ratio of leaf:water). I’ve found that some Japanese greens seem to have a “sweet spot” as far as volume, and A&D’s Jackee Muntz did as well – larger cups ended up strongly caramel while smaller cups did not. All very intriguing!

4g tea
12 oz water
…left the desk, so not sure on steep time.
Dark amber infusion
Lengthy aftertaste of slight malt.
Smooth, not a bad tea. Again though, nothing spectacular.

Has some of the maltiness and high-tannin of an Indian-type assamica.