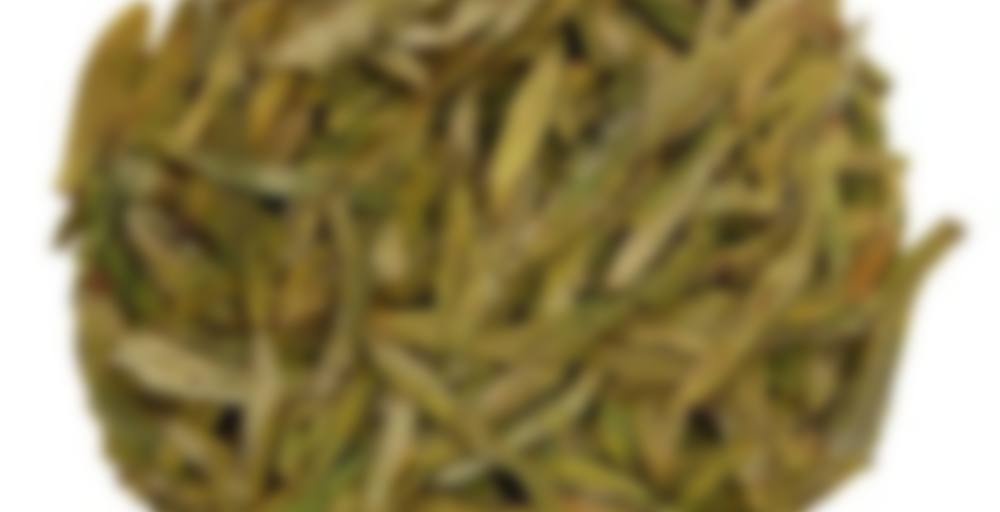 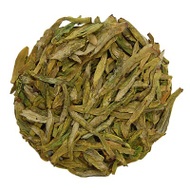 The name Long Jing means “Dragon Well”. This is truly a marvellous Green tea and one of the very first tea we offered for sale in TeaSpring. Even though it is not from Xihu area, this Long Jing still brews a cup of perfect tasting tea at a much more affordable price.

Looks like I’m going to pay a visit to the post office on wednesday. It’s a really small post office, my local one. Hardly more than a kiosk really. So I often get helped by the same person. This is the third tea order to have arrived in… let’s see… erm… a week.

I’m in a green mood today. What luck that I’ve presently got a cupboard just teeming with new and interesting stuff!

OMG these leaves are flatter than a flat thing! They look like they’ve been ironed. Or a steamroller went over them. I’m all fascinated by how they look in the tin. All springy yellowy green and flat and stackable. (Whaddaya mean tea leaves aren’t toys?) They smell kinda sweet but a bit salty when dry.

I dosed the leaves like I otherwise would and let the water cool off a little longer before pouring it on. I’m not worried about the water temperature. It’s more the leaf dosage. For some reason I have a sneaky suspicion that I should have used more leaves. Not sure why. Maybe it’s the flatness of them (OMG flat leaves!) that makes me think so. They look like they take up less space. I’m tempted to throw in another pinch of leaves, but I think it would be better to leave that sort of experimentation for the next time. I’ll just use less water for subsequent steeps.

Okay, this is very very pale! Now I’m even more suspicious about my leaf to water ratio. The aroma is erm… interesting though. Salty and seaweed-y and kinda.. I don’t want to say what this note reminds me of. You’ll laugh at me. No, I don’t want to say. Okay, okay, Royal Canin Maine Coon cat food, okay?! Yes, I know it’s weird, but smelling it, I just got the strongest associations to when Boannan was alive and I’d mix up a bucketful of cat food. (2 parts RC Sensitive, 1 part RC Maine Coon, if anybody’s interested in that side of things)

Hm. Yes. Hm. I definitely should have used more leaf. Just a smidge. Apart from what seems like a slight weakness, it has a very special taste. Kind of like it smells. Salty and seaweed-y, but not as cat food-y, thank you very much. It’s smooth, though, with not a hint of astringency in sight, it’s just this rather special flavour. Right now it’s not my perfect green, but if I was subjected to this often and over a longer period of time, I think I might end up being rather partial to it. Rating is therefore likely to be adjusted a few times in the future.

I saw lately someone (Jillian?) wrote that supposedly the third steep of this was the superior one, so it’ll be interesting to see how this develops.

Ha, I totally get the cat food description…one of the cat foods we use at the shelter I volunteer at smells like sweet green tea yumminess!

Yeah, it’s odd. It’s not a smell that you would think would be a good things, but it still is. I think maybe it has something to do with the associations we have. Cat food = kittehs = sweet!

There’s a tea for Maine Coons specifically? I have two! I have never gotten them Maine Coon cat food. I just put Mars on a diet, as a matter of fact, because he’s blowing up to the size of his planetary namesake. If the god of War were actually as fat and lazy as he’s getting, world peace would definitely be more attainable.

I assume you mean a food for MCs specifically? :p Yes, Royal Canin have a handful of breed-specific foods. The MC pellets are large and crunchy, they have to be chewed, so if your cats are of the sort of gulp down food quickly, they might work to force them to eat slower. They’re very oily though, so your dieting Mars might not be a good candidate for it. I always had to go and wash my hands again after mixing a new batch of food. Pet food is not something I’m willing to compromise on, and Boannan had RC all her life. I don’t think the MC specific food made all that much of a difference in her diet all-round, but she liked it a lot. When she was little it was two thirds RC kitten, one third MC, and I once found her bowl with all the kitten food in a sort of big heap around the empty bowl and the MC food eaten up. :p

You know, i was actually talking to a group of vets online yesterday (one of my mailing lists) and they mentioned the RC breed specific foods as being both unhealthy and “ridiculous” (their words, not mine—I don’t know anything about the RC MC food). One of the better foods they mentioned is called Life’s Abundance, but you have to order it online and they don’t ship out of the US. They also mentioned Wellness and Innova EVO, but they said the Life’s Abundance was better because it doesn’t have all the unnecessary vegetables in it. just throwing that out there if you’re looking to switch.

I’m guessing (if they’re advocating Wellness and Evo – I’m not familiar with Life’s Abundance), that they’re following a low/no grain philosophy. I favor that in theory, but none of my cats have done well on it (for various reasons).

Our household’s current problem is with Juliet – she’s very sensitive to fats (irritates her pancreas), and low grain foods seem to have a lot of fat. The only thing that she’s been able to tolerate is RC Light (which is chock full of grains, but she doesn’t puke it up).

So, RC does (IMO) do some things right. MCs are generally bigger than other cats, so I can see that having bigger kibbles could be good (especially for a scarf-and-barfer, which some dieting cats become). I wouldn’t say “they’re bad”, but just that it’s very situationally dependant.

Yeah, I think half the battle is finding something that the cats will actually eat. There’s no point in feeding a really, really good food if kitty won’t even eat it or can’t keep it down.

This was my last of this tea. I used slightly fewer leaves, with a longer brew time. Although today’s infusions came out a little less flavorful than previous ones, this is still quite good.

The “old cut grass”-ness is less prominent today; instead, there’s a hint of honey, particularly in the first few infusions. It also has a stronger aftertaste — a pleasant, mouth-drying astringency. I’d buy this again.

In the beginning you may feel a bit disturbed by the strong impression of freshly cut grass.
However…during continuous drinking the grassy touch will change to a pleasant, fruity and smooth experience.
Steeping time has an immense impact of this tea. It is one of the most fragile teas that I have ever come across…it is definetely a challenge getting a brew out of it without bitterness or falling under the idea to have just swollowed a bundle of grass.
Develops great taste if mixed with 4-5 slices of dry ginseng. This opens another door to the profound world of tea complexities.
Very cooling for your body…even if drunk hot.
If the leafs are good quality you may get 5-6 brews out of one portion. Each brew will leave you with a different impression of the (moody) dragon…