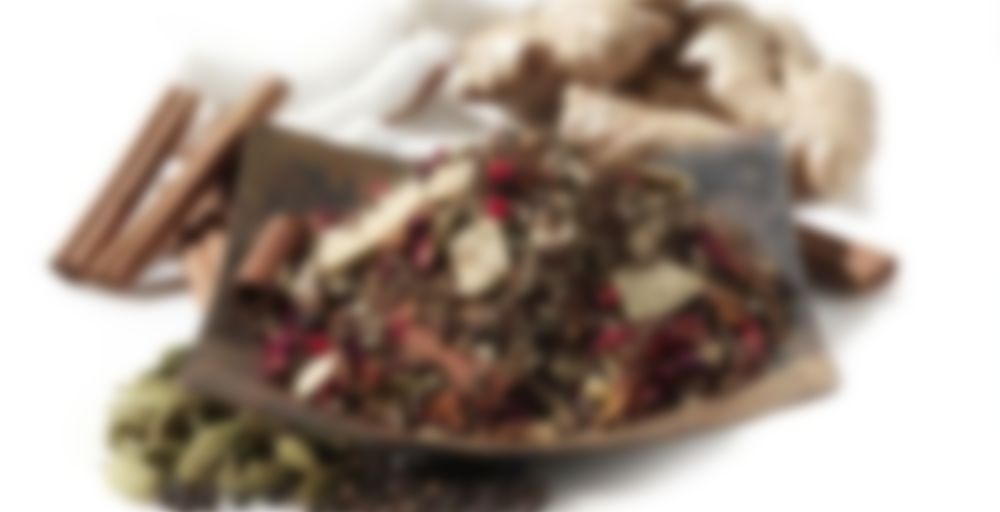 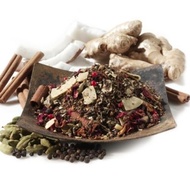 Legendary Tulsi, the most sacred herb in India, is blended with cinnamon, ginger, pepper, cloves, and red Rooibos tea for a wonderfully healthy tea. This Ayurvedic tea is recommended to balance the body and reputed to be a stress reliever, support general wellness and boost immunity.

Tea #1 from Another Traveling Tea Box

Since I got a pretty late start with the traveling tea box tonight I thought I would start off with something herbal. The box has a surprising lack of herbal teas, so I may toss a few in before I pass it on.

The dry leaf of this smells strongly of cinnamon and cloves and reminds me of Christmas. Honestly, I was surprised that I was able to smell it at all, my head is still stuffed up from my cold. The more I sipped this tea the clearer my head got, I may pull this out just based on the fact that it unstuffed my head and for the first time all week I can breath normally. This tea is wonderful when you’re sick!

The taste isn’t like any other chai I’ve had before and I’m still trying to decide if I like it or not. The first thing that I noticed about it was how sweet it was, there is a lot of sugar hidden in here, but that is typical of many Teavana blends. After the sweetness there is a spicy kick from the pepper and ginger, followed up by the cinnamon. I can’t really taste the coconut, but my sense of taste is only operating at about 75% right now. I’ll have to give this another shot next week once everything is back to normal.

I attempted a resteep, but it was noticeably lighter in color and tasted mostly of rooibos.

I just realized that I forgot to take any allergy medication before I started drinking something with cinnamon in it. I’m going to really regret that in a little while. Stupid food allergies.

I had high hopes for this tea. The leaves smell very good.
I found that upon brewing the flavor didn’t equate to the scent of the tea leaves. I can taste a hint of cinnamon and cardamom. I was surprised the rooibos didn’t present stronger.
I found a strange after taste with this. I can’t really put my finger on what it is but I definitely don’t expect to encounter it while sipping tea.
I found this tea too tame for the ingredients listed. I would suggest it to someone who wants a mellow tea to relax with in the evening.

It could be the tulsi, that has a strange herbaly flavor in my opinion

I’m enjoying this one. Thanks for the sample, chrimabro!

Brewed this with a bit of sugar. This is a really mellow chai, and I like it that way. I am not normally a fan of chais because I find the mixture of spices too overpowering and I don’t like ginger. This chai, however, is muted and pleasant. I’m not sure I’d buy this myself but I am pleasantly surprised.

Glad you like it! I’m crazy about this one. I find the flavor to be pleasantly strong (but only sweet, not spicy). I might make it with more tea (maybe 2.5-3 teaspoons for ~14 oz?), which makes the flavor strong and tasty for me.

I absolutely love this tea, but I use a ridiculous amount of tea to make it and add rock sugar. I like how adding more tea gives it a strog flavor while it stays smooth and fairly mellow. I just love it. Anyone like a similar tea they’d recommend? I’m looking for something like this; smooth, sweet, and not too spicy.

Today, I decided to be daring and try the rooibos tea I was sold on at Teavana’s Park Royal location in West Vancouver.

Once I mentioned I have an affinity for Chai teas, she instantly mentioned this tea. And, almost as instantly, I was skeptical of it. But, as soon as she opened the canister, the spicy aroma filled the air. It is simply divine, a beautiful potpourri of Chai spices and coconut, which sold me instantly.

Steeping gives a nice dark Chai red, with a very light spicy aroma. The scent is not as powerful as, say Teavana’s Maharaja Chai oolong, but the spice is there. Thankfully, the rooibos does not overpower, more works with the spice. This made me excited to actually taste.

This is an interesting Chai flavor. It is definitely not as bitingly strong as the Maharaja Chai oolong, but almost as spicy.

I would expect the rooibos and tulsi would have something to do with the pale floral base, giving me this weird feeling wondering how this spicy kick came from nowhere.

It’s a little disappointing that there are no coconuts to be found in the final brew, as there is prominent listing of coconuts. This also might be due to the rooibos and tulsi.

Nonetheless, a strange yet satisfyingly spicy brew, best sweetened. It would probably be better iced, as I would anticipate iced would bring out a better flavor.

Not my favorite Chai. I left a review about another Chai from Teavana but this one is my reference point. It’s too spicy for me personally. Maybe it’d be better if I mixed it with something but once I get to the bottom of the cup I feel like I’m drinking a box of cinnamon.

When I’m in the mood for a chai but don’t want caffeine, this is my go-to tea. I make it with rock sugar and a little half-and-half, and every sip is glorious.

I used to be in love with this chai….the aroma is glorious. Whenever I brewed this my colleagues were jealous.

I don’t like this much. It tastes a little soapy, which I think is the tulsi. Not much spice, and what there is is mostly sweet cinnamon. It contains unspecified flavouring and sugar. I’m working on decupboarding!

Hmm… all I taste is rooibos and cinnamon. Pretty boring, compared to all the yummy scents the dry tea has.

This tea is a bit of a puzzlement. It takes on very different character just by changing a few variables. Use water that isn’t as hot (195 degrees) and this chai has a fruitier, lighter flavor. Use hotter water (208) with added sweetener and the taste & aroma morph into the chai liquid equivalent of Red Hot candy. There are large pieces of Indonesian Cinnamon stick (the thicker kind of cinnamon as opposed to the thinner Ceylon), so I’m not surprised by that flavor. And even if you leave out the cinnamon stick there’s a nice amount of cinnamon and spice permeating the brew with the cloves, ginger, cardamom, tulsi herb and beautiful pink peppercorns—I love their almost floral, peppery taste. But I’m stumped by the fruit flavor that I taste because there isn’t anything fruity in the ingredients. “Flavoring” is, however, listed. Coconut rasps, coconut and coconut fat are all listed as ingredients, yet there is scant little coconut flavor whatsoever. In fact the coconut rasps taste more like fruit with citrusy tropical notes. Go figure! So while I really enjoy the taste (and even the potential health benefits of tulsi), I wish I knew more about what exactly I was tasting. Strange but yummy.

Very good iced or hot
Pairs well with foods that like a semi spicy drink like pastas, steak, etc
Full aroma of spices and “Red Hot Candy” smell. Reminds me dramatically of “Red Hot” candy, and just as delicious!

One of my new Chai favorites.