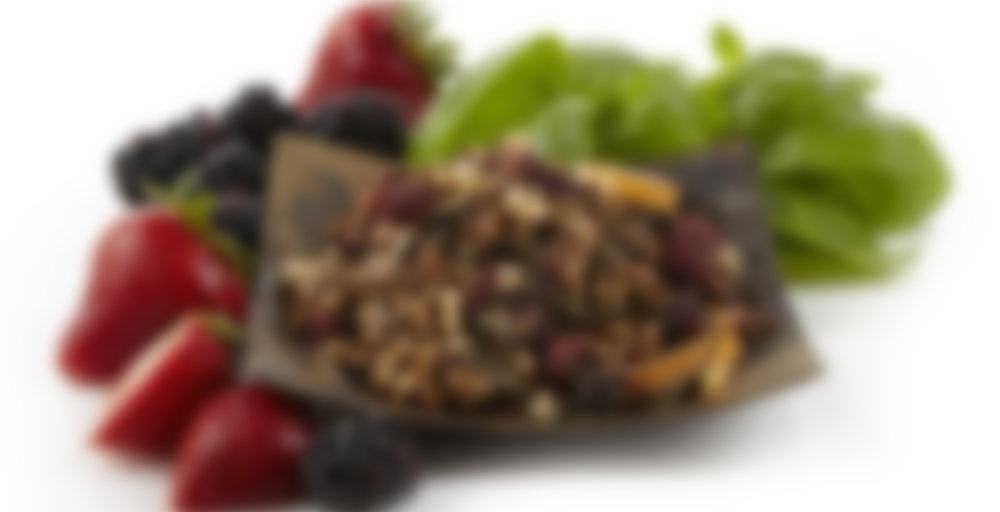 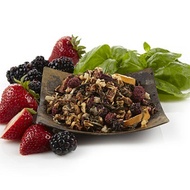 Expect the unexpected and be pleasantly surprised with this unique and flavorful white tea blend that is a culinary delight. Sweet meets savory, fruit meets herb, as luscious and juicy blackberries, strawberries, pineapple, orange, and lemon marry well with sweet, smooth basil creating an extraordinary union of unexpected flavors that combine into a bright berry basil sensation.

Seriously, this is kind of weird.

One of my coworkers and I tried this (hot and unsweetened first, and then with some sugar) in the store the other night (this was the same night we tried the Watermelon Mint Chiller) and thought it was vile. We discussed whether or not it might luckily be discontinued at the end of the year, and who might get a Christmas present of a pink slip for coming up with this one.

I’m trying it again at home (sweetened), and it’s not quite as bad as I remember it being. I wouldn’t buy it, but I can drink it. I need to think back to a time that I tossed together a tasty salad with juicy chunks of strawberries and bits of fresh basil…and then I go, “Oh yeeeah, okay, it tastes a bit like that, that was the flavour they were going for.”

It’s really a bit of an odd flavour for a tea though; at least, in my opinion. But some flavours that I think are really wrong for tea are flavours that others go for (maple, for example, which has a tendency to literally make me queasy when I taste it in tea), so perhaps other people will like this. It’s nowhere near the top of my list of personal recommendations, though.

I will chill the rest of this cup and update.

Chilled Update: Okay, I thought icing this tea would improve it, but I think I was wrong about that. You know how I said that the mint is more noticeable in the Watermelon Mint Chiller when it’s iced? Well, the same thing seems to happen to the basil here, but that’s not necessarily a good thing. Ever had a fruit-and-basil salad that was too heavy on the basil? Yeaaaah.

There’s something else that comes out towards the back of the sip, but I’m not sure what it is. Lemon, maybe? Okay, actually lemon and basil aren’t that bad a combination, but having them follow the berries too strongly is having that making-me-queasy effect. Nope, nope, nope.

I like basil with fruits so I might like this. Granted I’ve never put berries with it, so that’s kind of reaching but now I’m curious. I got a noseful of that mango mate puerh stuff today and I’m afraid I’m going to have nightmares tonight.

LOL! I’ll admit that I’m not looking forward to tasting the mango mate pu-erh… Maybe it’s better than it smells?

One of my coworkers mixed that with the Strawberry Champagne Oolong or whatever that one is, and literally was almost physically sick. He made a huge point today of taking me to the wall and saying, “NEVER BLEND THESE TWO. NEVER.”

That sounds terrifying. Like instead of mixing up all the different sodas into one, it’s with tea instead.

I am curious about this one, don’t think I got to smell it when I visited, however I did get the mango mate pu-erh wafted at me and it was disturbing. Then again when Joie de Virve came out one persona said it smelled like nail polish remover and everyone was turned off, but I came to like it. I do hate the smell of Strawberry Slender (also a flavored pu-erh) and I think Roobios Tropica and ToLife smell like rotting fruit so… but I am curious as to the curry and mango lassi analogy that I will try it at some point.

I am totally with Autumn Hearth on the mango mate pu-erh one. It smelled so scary!!! The person who was working tried to save it by saying, “oh, it doesn’t taste how it smells…” but followed by saying he hadn’t tried it yet! facepalm

Guys. Guys. The Mango Mate Pu-erh doesn’t taste like how it smells.

um..no. I tried this hoping for something a little different…and i suppose that’s what i got. I can taste the basil in this one, but it really isn’t the juicy sort of fruity tea i was hoping for.

Basil seems like a weird idea for teas, but I do like sweet/savory blends.. for example tortellini salad with pesto and chopped strawberries! Or Numi’s Basil Mint Pu-erh which really does taste strongly of basil. I got this in a swap with Novi and was excited to try it, since it seemed right up my alley!

There’s hibiscus, of course, and pineapple. Seriously, they put those two in EVERYTHING. Thankfully they went light on the hibiscus and the pineapple imparts zero flavor. But I’m also not really tasting (or seeing) much in the way of white tea, which is standard with Teavana blends I think, except for the Acai Blueberry one which had great fluffy leaves.

This is kind of mildly berry-like, maybe strawberry or blueberry? Jammy, not fresh berry. There’s kind of a generic berry flavor that Teavana uses, and that’s what this is. Not that it’s bad, I do like berry! But I am tasting zero basil. Like none, at all. Is there any in here even?! A bit disappointed, but my love for Numi’s Basil blend makes up for it.

I haven’t had this one for a while but the flavor is really hitting the spot. It’s sweet, light, and just a little bit savory. I love the color in my cup, soft pinkish\purple.

I continue to enjoy the contrast between the fruit notes and the basil in this tea. It is still a fruit tea, but it just a bit on the savoury side due to the basil. I am not a big fan of basil in cooking, but I do enjoy it in this blend!

This one has always sounded interesting. Alas it is Teavana so I am immediately bias against it :P

I know, I fight my teavana bias all the time. I order them online and generally only when they go on sale, thus avoiding the pushy sales people and giving the company less dollars for their tea. I have not had great experiences in store, but they have some really interesting blends!

I only ever order online but even then I find their tea outrageously outpriced and never good enough that I would want 2 oz of it.

Yet another from Teabox B. I love basil, so I was hoping for a ton of basil in this… not really. There is so much stuff in it though. It’s supposed to be white tea, but there wasn’t very many white tea leaves either. Tons of pineapple though. And a tiny blackberry! After steeping for a few minutes at boiling (though the instructions said for shorter time and lower temp since it is supposedly a white tea), the cup color looks disasterously red (hibiscus). But the flavor isn’t overly so.. it adds a nice tartness but that is probably the pineapple toning it down. There is a berry flavor. And something that was mildly mint. If I added sugar, it would seem like punch. Not a bad one from Teavana!

I just wanted to say thanks to Lala for setting this up. I received the box in the mail today, and there are lots of interesting sounding teas to try. I just started at the top of the list (couldn’t choose).

This is a pretty decent berry white tea. Not too sweet, not too tart, the fruit doesn’t overpower the white base. There isn’t enough basil, in fact I’m not sure I’m getting any at all. All in all it was a nice way to start out from the box. Interesting without being too weird. I’m going to make another cup of this and let it cool, see if I can get a bit more basil from it being cold.
I steeped it 1.5 tsp/8 oz 80C 4 min

Yah!!! Glad it arrived and you are enjoying what is in it

yay for a safe and sound teabox arriving!

Unsure about how this one smells dry. It is kind of fruity but also has the smell of steemed green vegetables. Not two things I would normally mix together. There is a spicey and basil smell to it.

The brewed tea is actually not too bad. More like fresh berries in a spinach salad. I am not getting much basil per se, but I am getting a general spice type taste. This one is definitely better after it cools.

Edit: this one is better cold (I forgot my cup and it cooled off after a number of hours). There is more basil taste but still fruity. The berry and basil go well together.

Thanks to KallieBoo! for this sample!

I was feeling adventurous tonight and once I discovered this was a white tea and thus low in caffeine, I went for it.

It’s actually not bad! I sweetened it and it basically tastes like strawberry jam though the sample contained quite a few strawberry chunks. I’m not getting the basil really, maybe a hint at the end of the sip. I’m not sure I’d go out of my way to buy this, but I’ll use up the sample.

1st smell: Odd. Berry-ish. an undertone of something not quite appealing. Maybe it was the basil? though I do like basil, just not expecting it with a fruity tea.
1st taste: Same mostly.

The only thing distinctive about this tea is that it’s marginally better then the Watermelon Mint Chiller.