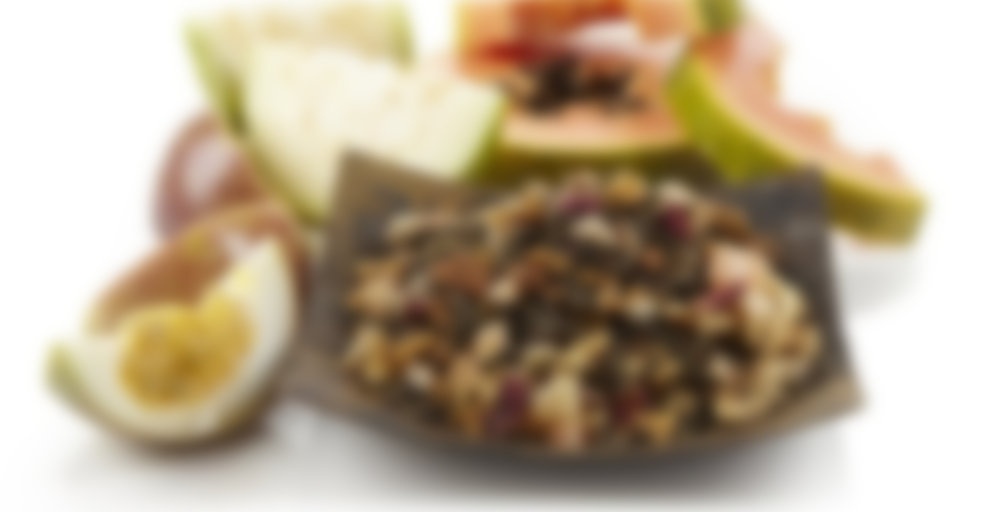 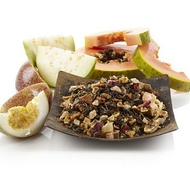 Tantalize your taste buds with this exotic, tropical fruit marriage of rich white tea and green rooibos. A ‘superfruit’ powerhouse of passionfruit, guava, papaya, sweet fig, and melon with just a touch of soothing vanilla and rose, it’s a delicious and refreshing treat that is most definitely a sip worth taking.

I think I might have bought this tea, put it away, and forgot to try it. That’s embarrassing… Oops. Oh well, I found it this evening and brewed up a cup. I think I picked this up based on my love of Pink Passionfruit and Guava Cadabra, this is neither. Nor is it a perfect fusion of the two. It is, however, an alright tea on its own.

Like most Teavana blends, I get very little white tea, but the fruit flavours are nicely blended and the overall flavour is mellow and reminiscent of tropical fruits. I would drink this again, but it is no replacement for my Pink Passionfruit love. Nor do I think it would cold steep particularly well actually… But it is a nice cup on its own, and worth a steep once in a while.

I received this tea as a gift. I don’t think I would have picked it out for myself, but I still enjoyed it.

The leaves have a very sweet smell, almost like bubblegum. I was a bit worried because I generally do not like to drink overly sweet teas.

After the first brewing, the tea had a sweet smell that was more fruity than bubblegum-like. The flavors I picked out most were vanilla and papaya, but the flavor of the tea does not really come through. I found the taste to be rather pleasant, but my boyfriend (who is also a tea-drinker) thought it tasted and smelled like cold medicine.

The second steeping smelled mostly of vanilla with a slight fruitiness that was unidentifiable. I could taste the tea a bit more this time around, but overall it was a bit too weak for my tastes. I don’t think I’ll steep it a third time without adding a little bit of fresh leaves.

When I run out of this tea, I will not be restocking it.

Out of all the new teas, this one ranks somewhere in the middle for me. It has a pleasant melon flavor with an almost bubblegum-like aroma (in the loose leaves and the liquor). I may or may not bring this one home again.

I am sad I can not get more of this . I find this a very relaxing tea.

Huh, this says white tea, but all I see is green rooibos. This is interesting. It is tart, sweet, floral. I’m guessing that adding sugar would even out the tart, but I don’t want to mess it up and turn it into juice. I think Teavana actually did okay with this one.

Aside from the new teas that came out, I realized that I hadn’t tried this one and added it to the list. Like others have mentioned it has a fruity/bubblegummy kind of scent and slight flavor. There is an odd after taste of soap that is really throwing me off. Other then maybe seeing if this tea will make a good iced tea…or at least passable, because I don’t see much use for this tea.