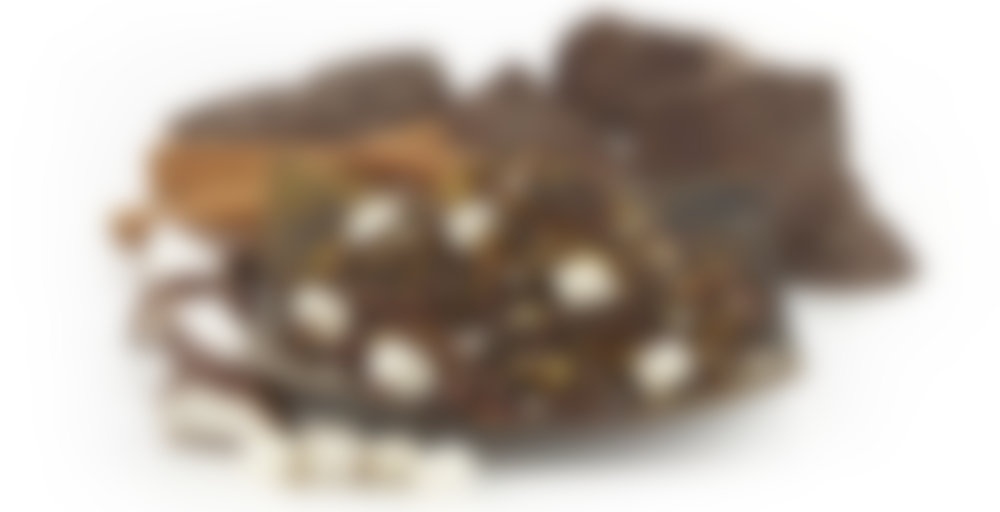 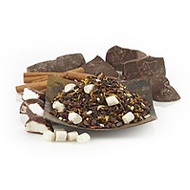 Wulong tea with a touch of whimsy. Bright oolong melts into classic flavors of the campfire; toasty marshmallow, sweet graham, and rich milk chocolate blend together for a treat to sip while thinking of bonfires past, and those yet to come.

I… do not enjoy this tea. Which sucks, because I really, really thought I would. Normally, Teavana’s teas have a little too much ‘stuff’ for me, so I shy away from them. But I was eyeing this on the site and finally decided to pick it up when I went in to get Joy. I figured it probably hasn’t changed from the Teaopia tea of the same name, right? And the picture on the site made it look like it at least had a good ratio of tea.

First inkling was when she was measuring out, and I realized… those aren’t the tiny hotchocolate-sized marshmallows. Those are whole centimetre-across minimarshmallows. Kind of huge for a tea. Second was when I went to brew it, and realized all the dark stuff I thought was the oolong tea, was actually everything else. The chicory root, carob pieces. There’s very little actual tea in it. I was disappointed, but I’ve had teas like this before and figured it’d just go in my ‘after dinner decaf’ pile.

Brewed, it smells of chicory and chocolate, so toasty and sweet. There’s an oily film on top, and it brews very dark. The taste is… straight up chicory root, chased with chocolate. I don’t taste any tea, and sickly sweet. As if I’d added a little too much sugar to it. There’s a very off (not quite artificial, but weird and sweet) aftertaste as well. It’s familiar, so I think it must be the chicory or carob, because I’ve had decaf blends with those before.

All the chocolate bits leave a black sludge at the bottom of your mug, and all the marshmallows melt in the infuser leaving a sticky white mess that’s even harder to clean once it’s dried. Definitely rinse out your infuser right after making the cup.

Luckily, the low ratio of tea-to-everything-else means that I can use a good few teaspoons to make a cup. It’s definitely not for me, but still drinkable, so hopefully I’ll finish it fast; I hate when those less-than-spectacular tea buys end up sitting in the back of your cupboard for years.

I’m definitely picking up hints of darker oolong and spices. But smores? No. There are hints of chocolate here and there but no Graham crackers. If named differently it would make more sense

I was skeptical. As a s’more lover, I’ve tried many “s’more” flavoured products. How many have actually captured the essence of s’more? NONE.

But at this moment I sit at my computer, eating granola and sipping S’more Oolong. Well done, Teavana. I taste the chocolate, and some how, almost by magic, I taste graham cracker. This feels like the perfect tea as we start rolling into fall. It’s warm and toasty tasting. Reminds me of sitting out by the fire.

A note on the steep time, I tasted it after 3 minutes and it seemed a bit weak so I left the bag in while I drank it.

That being said, I enjoy it – especially for the current price -, but I won’t restock it.

I bought this despite never having liked eating smores. Teavana gives me the worst impulse control. I’m getting pretty strong “graham” flavors from this, accented by the chocolate and cinnamon. Strangely tastes like a watered down chocolate chai. If you’re into dessert teas you’d probably jive with this. If you legitimately like eating smores you’d probably like it even more. I won’t be repurchasing.

My first impression of this tea was it was going to be bad, cloudy tea. Luckily it tastes quite a bit better than it looks. It has a nice flavor of chocolate, along with flavors of cinnamon and marshmallow. You don’t really get the flavor of the oolong or the mate in this. The chocolate really dominates.

I brewed this in a 16oz Teavana Glass Perfect Tea Maker/Gravity Steeper with 3 tsp leaf and 190 degree water for 3 min. This would get a score of 90 if it wasn’t cloudy but I took off some points for that. Tastes really good though.

Sipdown. The sales person at Teavana suggested this one iced, so I used all of my last of this tea to brew it extra strong and have over ice. Not bad. :)

Not necessarily smores, but a decent flavored tea nonetheless.

I’d put this more as a chocolate-flavored chai than anything else, with a hint of creaminess from the white chocolate pieces. It’s indulgent, and a bit of half & half turns it into an insane latte. I picked this up for 75% off, which made it a very worthwhile purchase.

From the uh, Herbal TTB!

So I was almost 100% sure this was an herbal. I did not see anything that looked remotely like a leaf from the camellia sinensis plant. There was only a tiny amount left in the box when I opened it up, less than I would use for a single pot, so I killed it.

It was pretty good. Like a chocolate covered marshmallow and some crumbly graham cracker. I didn’t like the chocolate bits or the sludge it left in the bottom. But I drank my whole mug nevertheless.

Looking into the infused basket I saw one single leaf and a chunk of stem. Hmm. All the package said was ’S’mores – Teavana.’
I think that just goes to show that Teavana should just go into the tisane business and give up tea altogether.

Their Body + Mind blend is quite good. No fruit in that one.

This tea was NOTHING SHORT OF AWESOME. I loved every last drop. It was sweet, chocolatey with lots of cinnamon goodness. Plus who doesn’t love marshmallows?

BIG THANKS to CCOPPENS for this one

I’m really glad you enjoyed it so much!!

I really enjoyed this tea, though I think the cinnamon was a little overpowering. Overall though the sweetness was very enjoyable and reminded me of dessert :)

This sounds like the perfect tea for around the campfire :P