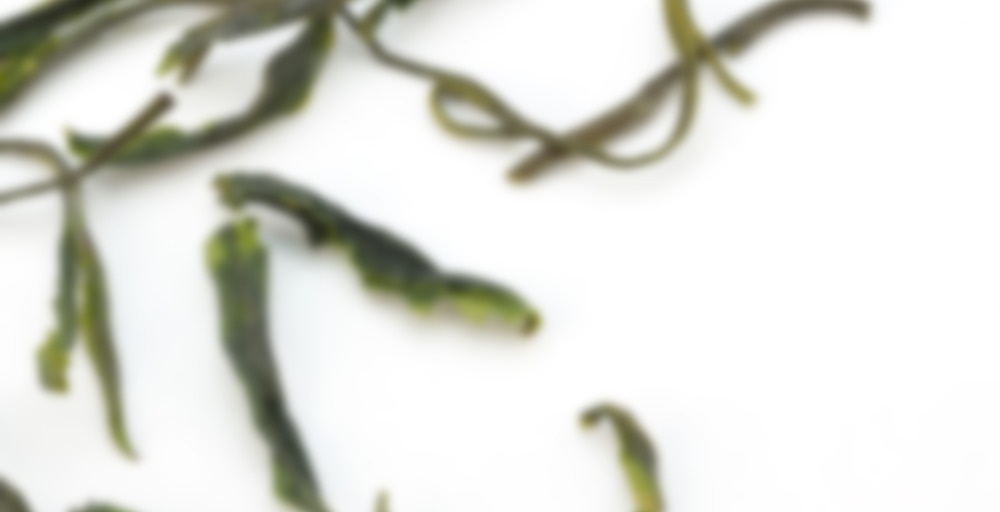 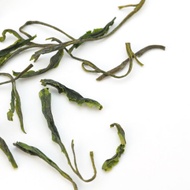 Low caffeine (less than 10% of a cup of coffee)

When brewing, it tastes light sweet and fragrance. In Chinese, Mao Feng refers to the hairy buds—to be covered by pekoes means a super quality of the tea leaves.

This Organic Tian Mu Mao Feng Green Tea is produced by traditional manual frying method and the idea of modern crafts of tea making. Combined with the advantages of organic tea and high grade tea, it is suitable for tea lovers of organic tea,

I love how these leaves are so “matter-of-factly” – they are sturdy and stand their ground! Precise, skinny, longish green-grey leaves…lovely!

Upon opening the bag I was stunned with how FRESH and amazing the aroma was – very much like dark leafy greens, spinach, and something sweet…sugar snap peas, perhaps! Very nice! Powerful nose!

Once infused the aroma mellowed-out quite a bit.

The liquor color was that of a yellowish-green…bright but light with little to no texture to the eye.

As for the flavor…a tasty, slightly vegetal, slightly green-veggie type broth taste. There is a bit of buttery-goodness, to it, too! Very nice! This is completely FRESH and CLEAN and CRISP!

Mao Feng’s are among my favorite greens! This is superb!

Very light liquor – like a green tinted white tea. Smooth, slight hint of seaweed, grassy and “fresh”. Depending on how resteeps go, this could definitely belong in my cupboard.

I can relate, I recommend using copy before submitting. It has saved me loud rants.

Thanks for the tip!

This was the first tea I tried from my recent Teavivre order. At first when I brewed it up, I was too cautious. I only used 1 tsp of leaves and did very short steeps (10s). But it didn’t taste strong enough and there was no bitterness. So today I’m trying it with more leaf and a longer steep time.

Obligatory sniff in the bag: Smells really green and creamy with a hint of fruit (lychee)

Second steep: Very refreshing, maybe slightly bitter but not too noticeable. It’s becoming quite buttery and vegetal, with the sweetness remaining.

Third steep: Still has a very consistent green and buttery flavour from the previous cup.

I purchased this tea on a whim. My apartment gets really hot in the summer and I was craving some green tea to drink. So I ordered 3 green teas from Teavivre, which themselves also came with some green tea samples. ;) Along with my recent Camellia Sinensis order, I went from having no green tea to 7! LOL
A year ago I wouldn’t even think about buying so much green tea. I’d had so many bad experiences with, what I assume was either old green tea or uhh choppy bagged stuff. (And it doesn’t help if they give you bad steep instructions) So I’m very glad that Teavivre helped turn me onto fresh green tea.

Overall I like this green tea. It’s not my favourite type of tea, but I’ve learned to enjoy it more. What I like most is it’s ease of brewing (it doesn’t come out bitter) and the slight sweetness.

This is a green tea that has a very similar profile to another Teavivre favorite, Tian Mu Yun Wu. It’s got a sweet aroma of fresh cut flowers. When brewed, it’s light bodied and fruity with notes of crisp lettuce and sweet pea. There’s a nectar like sweetness to it and no bitterness even when the temperature is pushed.

Compared to Tian Mu Yun Wu, it doesn’t have quite the same depth nor resteeping power. Regardless, this is another stellar offering from Teavivre. I wouldn’t mind buying some more if I hadn’t already bought a 100g bag of the other tea.

Now that I’ve figured out how to brew it, this organic Mao Feng from Teavivre has turned out to be one of my favorite green teas. Happily, I took advantage of the awesome BF sale and ordered another pouch. It’s very fresh and smooth and less vegetal—closer to Lu Shan Yun Wu than to Mao Jian or anything Japanese or Korean. I even like it better now than the Huang Shan (just lucky, I guess…).