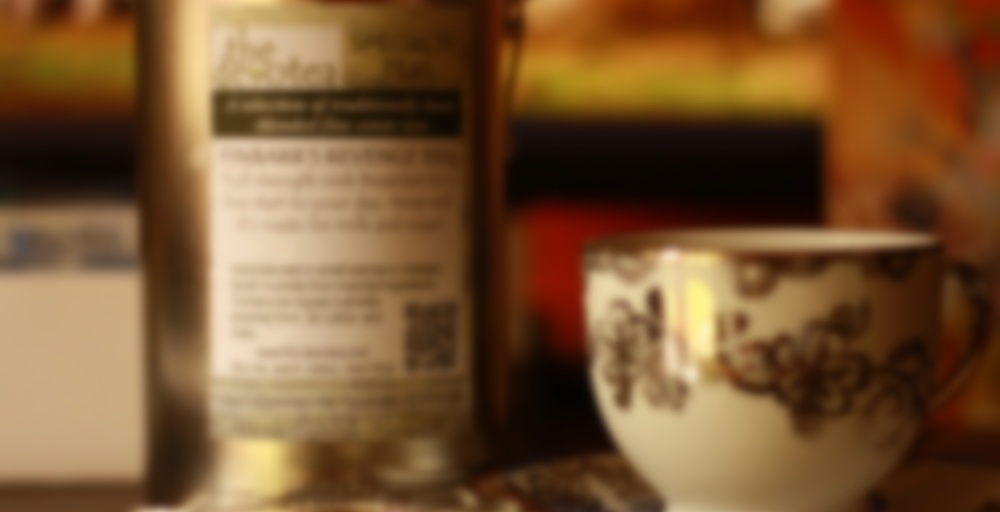 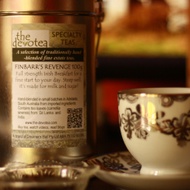 A belter of an Irish Breakfast tea blend. Strong; designed for the milk-and-sugar crowd but lovely black. Available from US, UK and AU sites on www.the-devotea.com

Upon my return home for the funeral, I was feeling very teaprived, & this one seemed the only suitable choice, to continue the theme of the day, & the week, actually, now that I think about it.

Note to self: Next year spend all of St. Patrick’s Day drinking & comparing Irish Breakfast blend, you silly lass!

lol I love these new words :)

Oooh. This is silky slick as oil (without actually being oily, phew!), easy going down but nice and strong too. I love when you get that strength but without the usual corresponding tannic roughness. And I’m getting that mysterious lurking marine quality Terri describes (and loving it).

I had this first thing with cold leftover cashew chicken (not the most traditional, but still the breakfast of champions). Really nice. Thinking of hanging with the Queen shortly (“rain outside so a book and the Queen, peachy keen” popped in my head and well, who am I to argue?).

That sounds really, really good. As does the breakfast.

as does the queen!

Thanks for taking the time to record your thoughts.
Speaking of Things Queenly, we have just launched “Queen Adelaide Superior Breakfast Tea” in Australia and two of our blends (‘Love of My Life’ and ‘Seaside Rendezvous’ – both AUST only sadly) are named after Queen songs

yes, i am jealous of the australian residents who get to try those! esp. seaside rendezvous, sounds great!

and haha Sami Kelsh, good to know i’m not the only one who thinks leftover take-out-style (even when homemade) chinese is the best breakfast!

@ifjuly Seaside Rendezvous is one of my favourites, but to be honest, not a big seller. We created it for a cause. Here’s the long-winded story of its creation. http://thedevotea.teatra.de/2013/01/21/reality-check-no-thanks/

oh man, great story! it’s a shame you couldn’t get a civet to go to the seasize rendezvous. in a bowler hat. but i guess they probably don’t like water…

teeth though. teeth would be provided if there’d been a civet there. especially if you tried putting a hat on him/her.

For completeness/self-indulgence, here is a link to how we came up with Finbarr’s Revenge, the tea this post was originally about! http://thedevotea.teatra.de/2013/05/29/real-people-real-tea-devotea-origins-part-v/

ah, i’d been wondering who finbarr was. also, your blog is a really enjoyable read! i just finished the one about the duchess of bedford and it was fun too. thanks for sharing!

Thank you. What other teas of our do you have, if any, that might be on your tasting radar?

i got the black tea sampler, plus bread pudding chai. i am going to try lord petersham tomorrow as my morning tea (i know it’s billed as an afternoon blend, but i like to wing it), looking forward to it! also especially excited about two tigers and persian princess.

My wife, the legendary Lady Devotea, insists the Lord Petersham is a breakfast blend. It works fine. I am heading to our warehouse to blend Bread Pudding Chai today; it’s good in a cup but also in 10 kilo mounds!

Another one from my swap with TerriHarpLady.

To me this one has a bit of a spice to it. I am having a hard time putting my finger on it. It reminds me of menthol a little bit. Kind of like a cough drop without the medicinal flavour. It is very light. It is possible it could be a bit of flavour contamination, but I do not have any other teas that taste like this, that I know of anyway.

The black tea part of this tea is really good. It is a strong black tea but not astringent or bitter. It is also quite smooth.

A little ‘mentholation’ is possible on a year by year basis – our teas vary with growing conditions. However, it should have been quite strong. I would recommend trying it at 3 minutes.

I can sum up this Irish Breakfast variant in on sentence: This stuff actually gives you the courtesy of a reach-around before punching you in the junk.

Boiling 3 min, 0 sec
Yours I Like This
9 likes
4 comments
Edit

I had to check out the 95/100 rating to make sure he was actually saying he liked it. Which raises some interesting questions…

Still my favourite tasting note ever.

Thank you VariaTEA for the sample! Just based on the name I would have assumed this one would’ve been a flavoured blend but I guess it’s not. That’s cool though.

The description said this was built for milk/sugar – I don’t add sugar to my tea, but I can definitely do milk! So, that’s how I prepared this one. It definitely takes the milk well; that’s for sure. I think it’s a little monotone though; I’m almost entirely just getting malt and while it’s tasty, it’s not satisfying. I’m at the point where, with straight blacks in particular since I’ve had more of those recently, I need to pick up multiple flavour notes to stay interested. Otherwise, things kinda start to feel repetitive even if the teas are different. I think that’s why, as a generalization, I’m still more captivated with favoured teas right now and why I drink way more of them.

Also; I’m having a hard time focusing on writing my tasting notes tonight – Tre had a date tonight which I’m assuming must have gone well because I came home from work at 10:30PM (their date started at 6PM for reference) and I can very clearly hear girly laughter coming from Tre’s room. It is now fifteen to midnight and they have yet to emerge.

Good for him – hopefully the success of tonight will cheer him up a little and make him stop feeling miserable about his love life (especially since we saw his ex today – she came in to my store to buy stuff with her current BF). However, they could try to be a bit quieter…

EDIT: I just ordered a pizza, but before I placed the order I knocked on his door and asked if he wanted me to add anything for them. They opened the door and were just hanging out on his bed (in the dark). But hey, at least they have the courtesy to not fuck while I’m in the house?

That was very kind of you to offer pizza. AS for the tea, maybe a little sugar would have brought out those other flavors? It’s hard to say, but I find that if a tea suggests adding sugar, I will try it without, and the add just a little teeny bit. Surprisingly, it can make a huge difference. (Butiki teas are this way. I find if Stacy says to add sugar, I will add sugar and it will round out the flavors. But that’s also usually only for her flavored teas.)

I love this tea without additions. 205F 3 min

Thanks for trying it. I’d suggest teaming it with porridge (‘oatmeal’) or toast with jam. Something about breakfast foods really brings this tea into it’s own. It is probably our least complex tea, it’s designed to kick start your day. Also AFTER the pizza, you might find it helps smooth out the feeling of ‘one more piece than I should have had’ which is pretty common with pizza.

Thank you Cavocorax for the chance to try this tea. It is enjoyable and pairs beautifully but milk but I think it is a touch too bold for my tastes so I don’t think this will be joining my cupboard anytime soon. Still, it was fun to try. 168.

revisiting. This is a perfect Assam. very smooth. no additions needed. i would call it elegant. it was comforting. no astringency, no bitterness. perfect !

thank you DeliriumsFrogs. i tried lol

that IS a nice photo! and your description sounds like an impossibiliTEA, i mean, an assam that doesn’t cry out for milk and sugar? hmmmm. i may have to check it out.

ok juliebeth, the temp was 200F and 3min. it works 99% for all Assams and Darj. This particular is extra smooth.

A blend of Assam and Ceylon, nice. I’ll have to try this one out! Thanks for the recommendation!

Another one from terri, that is still really tasty, but just slightly less so than the other couple i’ve had. This one leaves an after taste in my mouth that i’m less a fan of. HOWEVER, i wouldn’t turn this one down, nor would i discount the possibility of picking it up again because i can see it being just what i need on cooler winter mornings :) strong, smooth with a little reminder left over of what i was drinking heh. thanks terri!

Now the Devotea has me addicted to their 1910 blend, but I figured it was time to branch out into some of their other offerings with my latest order.

Before I discovered Steepster I was a Twinings Irish Breakfast kind of gal in the mornings. After many years (and thousands of dollars) later my palette has changed a lot but I still like a good Irish Breakfast tea. I steeped this up and after trying it plain my first utterance was, “Whoa!” This is a very bold, wine-y type of assam which is exactly as it should be. I wonder if 4 minutes is too long for the steeping but I think it worked out ok. I immediately added soymilk and a bit of rock sugar as I don’t really think this blend was meant to be drank straight! I wish someone would hand me a plate of scones but actually, this would go well with a bowl of steel cut oats.

Another good ’un — I think this sample will be gone within a matter of days if not hours.

Glad you liked it. It is most definitely blended for milk and sugar. I drink it straight up myself, but that is not what I was aiming for. 4 minutes is about as far as I’d take it. Oats is essential with it for breakfast.