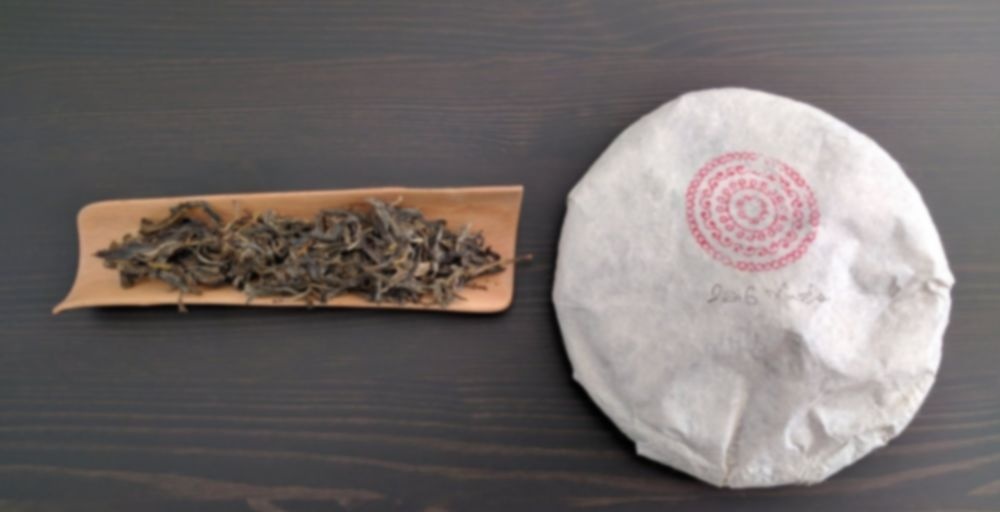 by The Essence of Tea
77
You

From the greater Bangwei area, this tea garden was a new find for us this year. The biodiverse environment is very pure and the trees, while not the oldest around, are generally old and most importantly not overpicked.
The processing is very clean and the tea itself thick and rich. There is some underlying bitterness which quickly transforms giving a long aftertaste and salivation.

If you’re looking for a great introduction into old-growth puerh, then this is your cake! Most “gushu” is very expensive and hard to authenticate, but this is the real deal and for a steal of a price! I bought this as a great travel tea and to brew for company. The cake is moderately compressed with some subtle aromas of live wood. The warmed leaf is quite sweet and fruit forward with nice aromas of apricot. The brewed tea is a little tricky to put my finger on, but it is very nice and soft! You can expect a medium body with clean tones of watercress, easy-going stone fruit, perhaps a background of vanilla. This is a wonderful relaxed tea to drink while working or studying. I’m glad I added this tea to my collection, and i’m curious as to how it will age.

Velvet smooth, fresh and sweet.
Images and more at https://puerh.blog/teanotes/2016-xinzhai-eot

Yay, my tenth review! I received ten grams of this tea as a free sample with my order from Essence of Tea. The bag has been sitting opened in my pumidor for over a month so it has had ample time to air out and acclimatize. My sample consisted of one larger piece, big, intact individual leaves as well as some smaller ones at the bottom of the bag. The sample had an air of being prepared with care.

Since there weren’t enough leaves to fill up the rather large Yixing teapot I usually use for sheng, I put 8.9g of leaves in a 130ml gaiwan instead. The dry leaves had a much darker and aged smell than you usually get in a sheng of this age, which leads me to believe what I was smelling may have been acquired in storage. This was a non-issue, though, because after a ten-second rinse the dark aroma was gone and I was greeted instead by a sweet, vegetal scent. After a customary ten-minute rest, I got to brewing. I did a total of eleven steeps, for 10s, 10s, 10s, 15s, 20s, 30s, 45s, 80s, 2 min., 3 min. and 4 min. respectively. The tea could have gone longer, but I gave up. I did all my drinking from a silver cup that I received from Crimson Lotus Tea the very same day, in case you are a believer in that silver makes a difference in taste. I have yet to do a direct A/B, but the potential influence on flavor is not why I bought the cup.

The first infusion had a thick, soft, creamy texture and a very prominent vanilla note, but also some astringency in the finish that I’m not used to seeing in the very first steep when brewing in clay. I hardly ever brew sheng in porcelain, so I can’t say if this tea is more astringent than average or if I’m just not used to it. In any case the first infusion was excellent. The second steep was less thick and in it the vanilla note was replaced by a creamy taste. It was also much more astringent than the first one or what I’m used to.

The third infusion was still creamy, but started to taste greener while still remaining reasonably astringent. The fourth one was the same, while having perhaps a bit more body and also possibly leaving a smoky tobacco aroma in your mouth. After that the creamy character dropped off and for the next four steeps the taste was green and astringent with some emerging green sweetness. Very typical young sheng flavor.

Starting with infusion nine the other flavors were finally starting to taper off, making way to typical young raw pu’er sweetness, although the sweetness wasn’t especially sweet. The tenth steeping tasted very clean while still maintaining strength really well. The eleventh infusion is where I stopped and that was probably the first time the tea was starting showing signs of dropping in strength.

All in all this was a good tea and a positive session. I didn’t like the tea enough to warrant a purchase, but my pumidor is already starting to get to a point where a tea has to be really special or interesting for me to be willing to devote room for it. If I were to magically acquire a cake of this, I would store it rather than drink it. The tea can be drunk now, but although the early infusions were nice, I think it’s still underdeveloped in other areas and tastes quite young. I found the tea quite astringent at every step, but even at its most intense it remained manageable. The biggest shortcoming I noted for the tea was a seeming lack of discernible cha qi. Normally I would regard this as a bigger issue, but I feel in this case the tea makes up for the seeming lack of qi with its seemingly excellent longevity and the way in which it maintains its strength extremely well throughout the session.

If you like creamy sheng and this tea sounds promising, I recommend trying a sample to see for yourself how you like it. For an Essence of Tea offering the cake is quite affordable and I think this is certainly a quality tea. The tea is okay to drink now, but frankly I think it would be a waste to do so. I can see this tea becoming very yummy in ten or fifteen years and drinking it now would be a waste of potential. I’m sure there are other creamy shengs out there that are more suited for immediate consumption.

In its current state I think this is a good tea. In the future I can see it becoming a great one. I’m trying to be conservative with how I hand out Recommended badges and reserve those to only teas I would buy myself or buy more of if I ran out, so therefore this doesn’t get one despite being something I recommend trying out.

You just need another pumidor….it will happen in time….