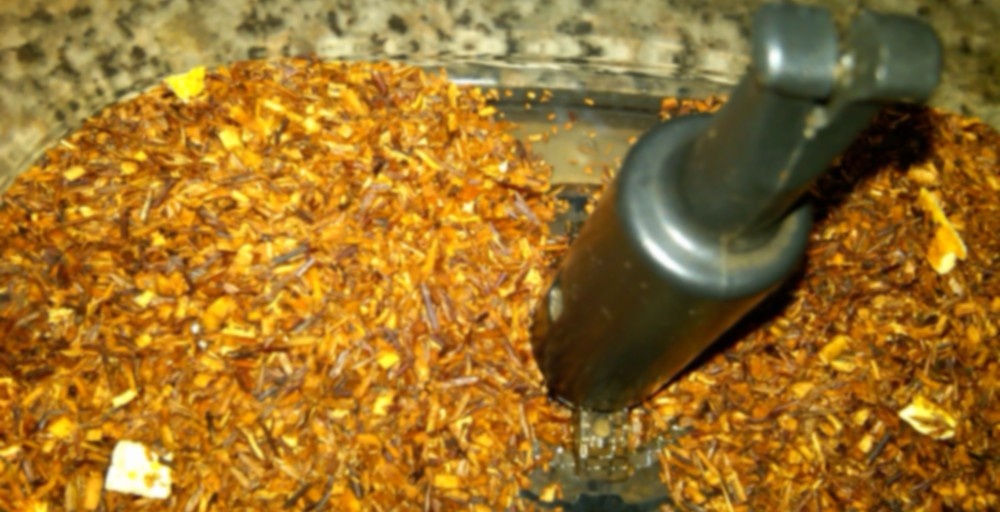 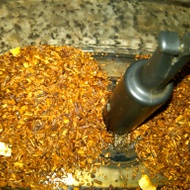 Description: This blend is hard to resist with the sweet aroma of chocolate and orange and the tempting chocolate chunks! Add a splash of milk and a touch of sugar for a truly decedent treat! Naturally caffeine free!
Ingredients: rooibos, orange peel, chocolate chips, and natural flavors

Hello rooibos my old friend [?], I’ve come to talk with you again. Ugh. Now I have Simon and Garfunkel rattling around inside my head.

One thing I think I can say with certainty is that as much as I haven’t cared for the Necessiteas flavored greens and have even had a strike out with one of their flavored blacks, they do rooibos blends pretty well. I am hardly an expert on the point, but I suspect that rooibos is pretty forgiving when it comes to being a base for blends. Still, I’ve had ones that were too noisy, so it’s obviously not a foolproof base. Or perhaps some people just like noisy rooibos and find those blends successful and the ones I like the disasters instead.

Be that as it may, this one did remind me more than usual of the covering of the bottom of a hamster cage, but I think it is because of the huge honking hunks of orange peel in the mix that make the rooibos look so backgroundy. And the chocolate poking up from underneath. Which as it turns out, is an accurate visual representation of the taste.

The aroma, though, is somewhat orange-medicinal, like a kids’ liquid medicine.

The flavor is a strong orange flavor that isn’t sweet, rich, or candy like as the orange flavors I’ve particularly enjoyed are. This one is slightly tart and a tiny bit bitter, but not in an entirely bad way. It basically has the character of orange peel, which is to say it tastes like what it is. No surprise there. Behind the orange is the rooibos, an appley note that stands between the orange and the chocolate which isn’t really much more than a warm cocoa undercurrent. Sometimes the rooibos and the chocolate change places. It’s not consistent, though.

The aftertaste is pretty strong on the rooibos. Which is not the best way to end.

I preferred the Peppermint Pattie, but this isn’t bad if you like flavored rooibos.

I love Simon & Garfunkel, but I absolutely adore Cylon & Garfunkel from Futurama. And it’s the Scarborough Fair song a la C&G that’s stuck in my head this morning ;)

And the bottom of the hamster cage? I smiled and then I got to the mention of chocolate bits and I giggled. :D

Oh my did the tiny rooibos chips make a mess inside the zarafina! They escaped the mesh basket and got everywhere.

On the other hand this is a delicious caffeine free dessert tea.

So the Zarafina is not good when it comes to rooibos? Please, when you do get the Breville, experiment with rooibos too and see how they fair in it? I don’t drink a lot of rooibos, but, I do occasionally like to have them… but I don’t like cleaning up after them….

@LiberTEAS usually it’s OK – for example I made the rootbeer float from TheNecessiTeas in the zarafina and it was fine, it must depend on how fine the rooibos is chopped. I’ll certainly make one of each of my favorites in it! (rooibos, green, black, white)

Yeah, I’ve made several of TeaFrog’s rooibos’s in the Zarafina and not had a problem, either. I suspect this one is just very fine! Wow!

@denisend you know the little gap around the plastic spike in the center of the basket? that’s where the chippies escaped