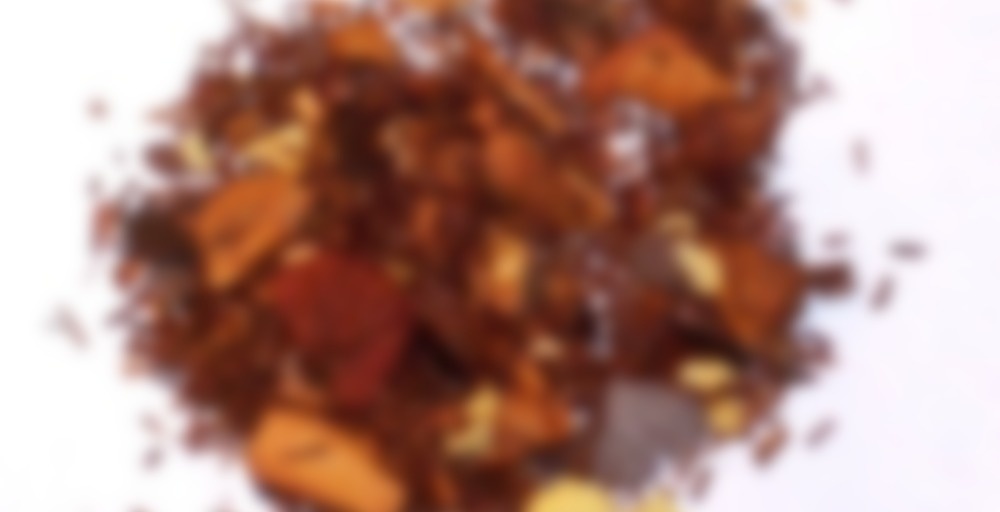 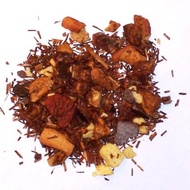 Peppermint Pattie is a new concoction using Rooibos, cocoa and mint. When I drink this tea I get a cool sensation! Naturally caffeine free! 3.5 oz

For my 200th note, I thought about celebrating by pulling out a Steepster favorite and giving it a try. Maybe Jackee Muntz, or Florence, or Dawn or Dragon Balls. Or what about waiting for that Hawaiian tea Auggy just wrote about, and that I sent off for this morning? Nah. I’m much too compulsive to wait that long. ;-) And it’s late, and I have a 7 a.m. conference call tomorrow. And there’s always no. 300. So this instead, as I figure it has minimal caffeine, and that’s what I’m about right now.

I had them toss this sample and another rooibos, and a fruit blend into my last order of samples for the sake of completeness, because that was all that was really left by way of samples once I’d ordered all the green, black, white and even oolong samples. I figured it would give me something to taste and write about at times of day when I had no business drinking caffeine.

This one, as it turns out, is all over the map.

The mixture is colorful: red rooibos, green mint, dark brown chocolate pieces, light brown dried apple. Yogurt? I didn’t see anything that really identified itself as yogurt though I saw some little white chips which were probably it. Dry, it smells like chocolate mint, which was promising.

After steeping it’s a cloudy, red cider color and mostly smells like apples and rooibos, which was not at all promising.

But then, there’s the flavor. In the initial sips, my fears were allayed. Chocolate, mint, and rooibos, in that order. The chocolate tastes dark and isn’t very sweet, but it goes well with the mint. The mint isn’t overpowering, but it is tasty. The apple and rooibos are present, but well below the screaming rooibos threshold. This is promising.

But, as the cup goes on, the promise fades. The rooibos stopped sitting quietly in the corner and made me aware of it, in its woody, tobaccoey way.

Then, it has the audacity to end on a high note: the aftertaste isn’t rooibos at all, but mint and chocolate!

Thanks for making me earn this one, Peppermint Pattie. I can’t rate you as high as your Rootbeer friend because you’re so confusing and inconsistent, but you were better than I expected. I would think flavored rooibos fans would like you just fine so I rate you with that in mind, and not as a reflection of my personal intentions toward you.

You ordered the Makai Black too? Yay! :)

Yes, after hearing how wonderful it was, how could I resist? :-)

Hooray! Super-fun note to read for such a momentous occasion :)

Thanks Rabs and Lena!

Yay! I really hope you find the Makai Black tasty – now I feel pressure to have good taste buds! Hehe!

Actually related to the tea here – how sour wood/sweet wood is the rooibos flavor in this? I’m on a serious hunt for rooibos I can stand and this one sounds like it might have potential.

Auggy, I didn’t taste sour wood. I suppose it’s more sweet than sour, but it struck me as mostly neutral on that front. Just more noticeable at times than I would have liked. When it did show up, I kept thinking about Doulton’s sawdust comments. ;-) Have you tried Rooibos Tropica from Teavana? That one was probably the most successful at keeping the rooibos in the background of any I’ve tried.

I have not but I will go off to look that up now! Thanks!

This was only so-so. I am still sampling some decaffs and rooibos for evening potations, and this seemed to lack flavour. I’ve had decent chocolate mint black teas, so maybe it was the rooibos standing in the way of a tasty experience.
Worst than meh but not so bad that I wanted to toss it.

Oh the places my mind goes: with the name of this tea I started thinking of Charlie Brown and his teacher’s voice. With your last line there the trumpet voice did the “wah-wah-waaaah” of disappointment.

One of my new favorites: Smells delicious, like a peppermint pattie. Liked it even better when I added half and half and sugar to it; brought out really creamy milky chocolate notes and a lovely subtle minty aroma.

I was worried this would taste of rooibos, but that doesn’t really appear let alone overwhelm the flavors. Smells very much like the chocolate treat. Mostly minty, a little chocolately, and also creamy. I like this mint-chocolate blend. Perfect for winter.

Thank you RachanaC (Rachel)-iHeartTeas for including this tea in the mystery box I received from you. The scent of the dry leaves is minty with a bit of chocolate. The taste is balanced and not overwhelmed by the rooibos.

I like my chocolate teas to be a bit more chocolate than this so I added some chocolate stevia. The flavor really blossomed. There are other ingredients mentioned but I’m not sure I taste them.

My tummy was feeling a little wonky so I thought a bit of mint was in order. It worked. I’ll be able to drink it all evening since its a rooibos.

Where do you find chocolate stevia?

I found a bunch of flavored stevia at a health food store, The Fruitful Yield. I have also found them a few other places. They are liquid. They can really add flavor to a cup of tea.