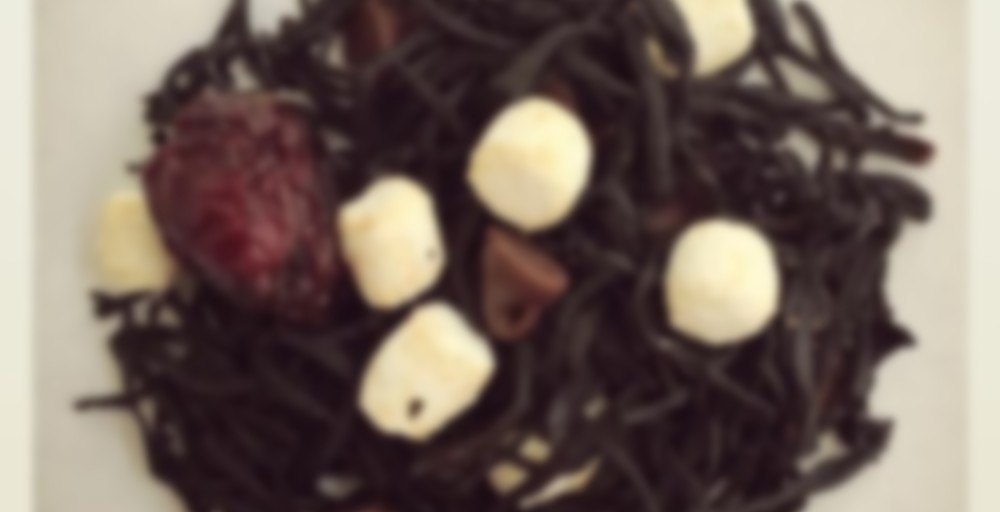 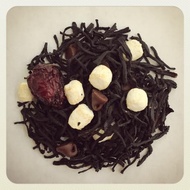 The combination of a sweet liquid cordial center with a milk chocolate coating is truly divine. Try with a splash of milk and rock sugar for an even more decadent treat!

Preparation: Western
Tasting Note:
I added a little rock sugar to this cup.

First impression: That this tastes that it has both chocolate and cherry in it. Sometimes Necessiteas chocolate blends don’t have the strongest chocolate notes. There isn’t a lot of creamy notes on it’s own though. The cherry is more tart than sweet. Since I did about 4 tsps of the blend to 10 oz’s water, I wonder, if I may have overdone it bit, it is a bit bitter and tangy.
Intermission…
Adding 1/4 tsp brown sugar and splash of oatmilk to the last bit in the mug:
Dark chocolate (or black tea) bitterness is gone, slightly malty and sort of faint cherry candy flavor is there, I think. I will need to start with this one as a latte first to get a better idea how strong these flavors practically.

Overall: I think if I am not having this one as a latte, I need to scale back on the tea a bit. Even with a potential oversteep, I think the chocolate and cherry aspects are there. Back to the steeping table on this one for next time.

Thanks for this, VariaTEA. Possibly this would’ve been more delicious if I had gotten to it sooner. As is, it is ok. Maybe a dash of milk or cream would be good.

Sipped on this today with my breakfast. I was a little distracted with all I was doing and eating (making and eating egg fried rice) so I didn’t pay too much attention to the tea. I recall it being okay, but not phenomenal. The flavor was true to it’s name sake and a little raisiny, but I wanted more of something. Not sure what that something was, but it didn’t stop me from downing the whole thing before I could reflect much on flavor and experience.

Mmmmm….an excellent tea to start the day. I’m often dubious of both cherry and chocolate flavors in tea- they often come across as medicinal, or downright artificial tasting. I actually found this to be pretty true to biting into a cherry cordial. I’ll definitely being adding some oat milk and making it a latte next time.

This is back in my cupboard thanks to VariaTEA. need to rememeber to try this as a latte next :) creamy cherry drink~

Thank you VariaTEA for the sample! I drank this one on the way home from work today as a latte; when I smelled it I thought that the flavours really seemed like they’d be suited well for that style, and the sample size VariaTEA sent me was the perfect amount to brew it as such.

I definitely enjoyed this one, though there were a couple aspect that I was either neutral towards or that didn’t completely work for me. What did work for sure was the overall creaminess; both the milk, marshmallows and silky chocolate all contributed to create a really smooth, velvety mouthfeel and flavour that was very rich and indulgent. I also liked that the chocolate wasn’t terribly in your face; had it been much stronger I think it would have felt over bearing and could have hidden the cherry notes.

The cherry is sort of the area that was a little amiss to me; not bad – just not totally what I’d expected or wanted. It was very candy like, and I think something sweet but more natural would have worked better. As it stands, this was pretty artificial. Not the worst though; it could have gone the sour/tart or medicinal routes and that would have been even more calamitous.

So overall, a nice smooth medium bodied tea with flavours well suited for a latte.

I actually just listened to the whole, self titled, EP by this band on the way home. It was my first listen through but I was REALLY impressed. It’s very emotional music, but at the same time incredibly peaceful and calming. I felt very lost in it all – to the point where I nearly missed my bus stop because I was too focused on the music.

And let me just say, I’m SO thrilled that I love this because the entire band is from Regina, where I live, and not only that but I have a personal connection to one of the members, Tanner. He does the drums and some of the vocals. I know him from DAVIDsTEA because he actually works there with me! I knew my coworkers had gone on about how killer his band is, but I sort of always kind of thought “Oh, I’m sure they’re not bad but they’ve gotta just be kind of biased because we all know him so well, and love him” but no, they’re really good.

They have one more EP, so about to go listen to that right away…

This tea was a whole lot of cherry and chocolate. I actually really like this one and the sample was perfect for one latte. If I were placing a NecessiTeas order again, I think this would be added to the cart.