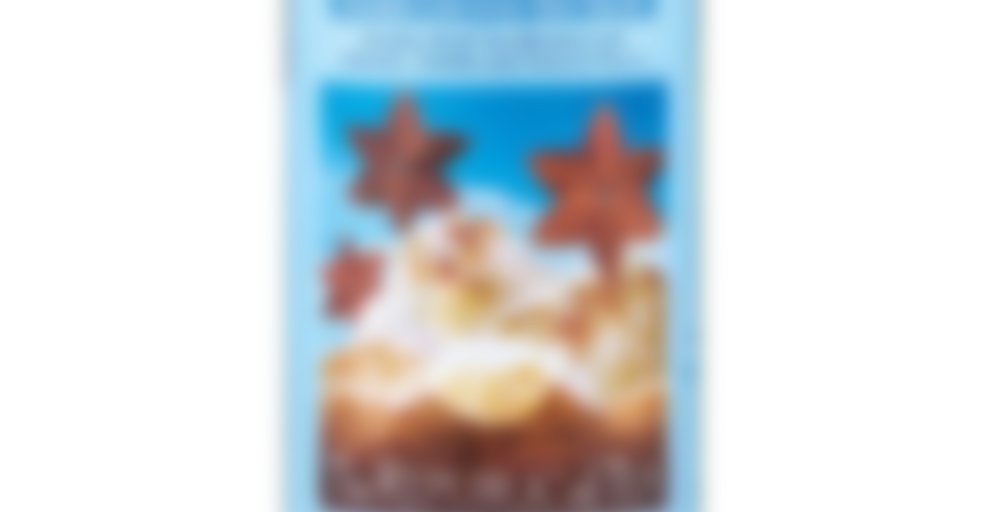 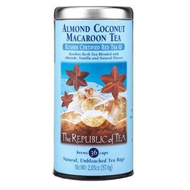 by The Republic of Tea
65
You

A Tea for Macaroon Lovers. The alluring aroma of lightly toasted almonds greets the fortunate sipper. Healthy rooibos provides a smooth, caffeine-free base while coconut adds a touch of sweetness. Make every day a cause for celebration with this calorie-free, Kosher certified tea.

Ahh, a long day, and a rewarding cup of tea.
This tea has got a really strong memory for me. When I was first moving into my house, before everything got set up properly, and I was without internet, this was one of the teas I had. I’d drink a cup every night, listening to my new house, and imagining my pictures on the wall, and making lists of the stuff I’d need.
So the cup of this is taking me back to that quiet time.

A little something I picked up at my grocery store. (I think I was in a bit of a buying frenzy as they had Les Palais des Thés teas for $3.)

Sadly, it smells like rooibos in the bags. Just rooibos. Post-brewing, the main smell from a distance is rooibos but if I stick my nose in the cup, I get almond. Almond is nice.

Taste-wise, there’s a strong flash of almond/marzipan as I first sip, then kind of nothing, then rooibos, then a bit of coconut aftertaste. The aftertaste develops a bit more after about thirty seconds, becoming quite nice as the almond comes back some. The aftertaste is almost a dead match for the aftertaste of a coconut macaroon ice cream I have (and love).

But here’s the thing: rooibos does not go well with these macaroon flavors. Normally, wood and coconut can blend well, but in this case, it doesn’t because the coconut takes on a sweeter, higher note when coupled with the almond. So the macaroon taste and the rooibos tastes remain separate and battling during each sip.

Oh, shame, it sounded promising. Perhaps with a black base?

Yes, I think with a black tea base it would blend much better. RoT doesn’t seem to focus on lots of yummy black tea flavors though, do they? Or is it just what’s offered by my grocery store seems to always be flavored herbals?

nothing from Republic of Tea seems to be that great

I hold out hope! I do actually like their coconut plantain and strawberry chocolate pretty well. And their Keemun 1110 is fab. But yeah, I think those are more exceptions than the rule.

mmm thanks for sending this one my way terri! I like this even with the coconut in it as it comes across as mostly almond cookie :)

yeah, I didn’t really taste much coconut in it.

Well this certainly smells like a macaroon! It doesn’t quite taste like one though. There’s a good bit of almond creaminess going on that’s rather pleasant. The aftertaste is closer to macaroon than the sip is. A bit too dry for my taste, but very shredded coconut-y. I usually (really, really) dislike coconut teas, but this is the exception.

This isn’t astounding, but it’s quite solid! Nice for an evening dessert tea. Thanks to whatshesaid for the sample.

well i told myself i wasn’t going to let my tasting notes get away from me. but it’s gone and happened again anyways.
i sure can drink a lot faster than i can write about them.
i was SO LAZY yesterday! and i vowed to taper my caffeine off earlier in the day than i usually do, so from my little caffeine-free pile came this tea!
already in a tea bag easy peasy.
nothing to write home about, but not an annoying tea by any means.
i just let the tea bag be lazy right along with me.
thank you whatshesaid!!

Final cup of the evening.
I never think I’m going to enjoy this one, but really, with a little sweetener it is pretty tasty. A nice little dessert cup.

A kind man at Whole Foods saw me drain my tea cup of the white tea I’d brought with me, and offered me a free refill- of any of the teas they had by the bar. How nice! I must have looked gloomy (which I was).

So I chose this one because it sounded really interesting. And actually, I’m scratching my head a bit because I swear, all I taste is rooibos. I don’t taste almond, or coconut. If I hadn’t taken the tea bag out of the tin myself I’d swear that he gave me the plain rooibos. Now don’t get me wrong, I like rooibos, but I was hoping for some macaroon action.

My experience is so far afield from the reviews on RoT’s website for this one that I now want to try it again just to, um, make sure it’s bland.
But, um… maybe only if they comp me again. Otherwise I’ll try something new next time.

I’ve been looking for a sweet non-fruity herbal tea to drink in the evenings. I just picked this up at the grocery store tonight, and it’s really yummy! It smells much sweeter than it tastes. The almond and rooibos flavors are most prominent to me. It must have sated my sweet tooth, because I also bought some cake at the store and I’m not interested in it anymore!

I absolutely love coconut, and have a hard time resisting a tea with it, which explains why I purchased this particular one. It’s not loose leaf, so of course the quality won’t be as impressive, but the combination of rooibos, coconut, and almond sounded so tempting I couldn’t resist.

Smell wise, it’s very hard to pick up any traces of coconut. I can definitely tell this has a rooibos base, and there is a very slight aroma of almond. Not much, though.

I steeped this for about 6 minutes and at the first sip, all I can taste is rooibos, with the soft lingering notes of almond. No coconut to be detected, sadly. I added cream and sugar which significantly improved the quality to a mellow, buttery, toasty cup of tea. For being in a bag, AND caffeine-free, this isn’t a total loss. Worth trying once, but not any more.

Advent Tea!
This is amaretto to start, red rooibos in the middle with a sweet coconut cookie finish. I only brewed with 6 oz of water and it came out pretty nice. The rooibos gave it a bit of a woody taste but I’d drink this one again. Thanks Lexie!