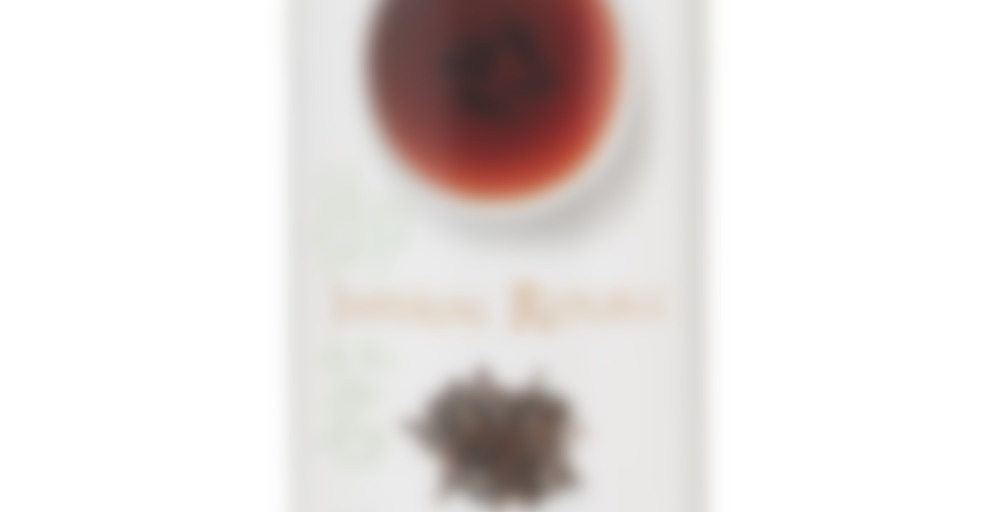 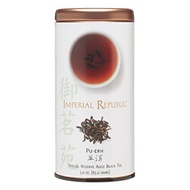 by The Republic of Tea
71
You

Special reserve aged black tea. From China’s Yunnan Province. Pu-erh tea is in a class by itself. Full-bodied, with a woody, earthy flavor, prized for having the greatest health benefits of all teas.

Using the last of this tea to ultimately see if I can rate this tea. Made a pot and sharing it with hubby so he can assist…

I love my kitties. A lot. And knowing that kitties aren’t made to digest grains, we get a food that is grain-free. It’s expensive and smells to high heaven but the kitties have been healthier and their fur softer so it’s worth it. Still smells though – like the fish and duck that are the main ingredients. Last night when DH was scooping out the fresh kibble, I had a realization. This tea smells like our kitties’ kibble. Which could explain why the cats seem so interested in it when I brew it.

Anyway, not going to hold that against it. Fishy initial taste/smell followed by a sweet hay taste. Oops, DH is apparently not a fan – 2 sips and I get to finish the rest of his cup. Oh well. More tea to judge with. Oddly enough, DH’s cup has a slight bitter shock right before I finish my swallow. I have no clue how that happened. Any ideas??

Will continue to update this as I go through more brews. So far, I’m liking this a lot more than the first time. I think this ultimately is an acquired taste that I could learn to get behind. (Though part of me keeps saying “You don’t have to learn to like GOOD things – no one needs to learn to like ice cream, right???”)

ETA: 2nd steep @ 3mins. I want to like this tea due to the beautiful color if for not other reason. I love the dark, dusky red it pours out as. Did a good rise/wipe out of DH’s cup and he’s not getting any more bitterness (thanks for the suggestion Angrboda!). Now sweet hay is the dominate taste… Can’t taste any fish but this brew seems even sweeter. I think I’m really starting to get behind this because it’s this is good. (DH’s comments – less fishy, smooth, fuller taste (compared to steep 1), a little earthy… Acceptable, not bad but he’s ultimately indifferent to it).

ETA2: Steep 3 @ 5mins. I think I’m ready to rate this tea now that I’ve gotten used to the flavor shift I had to get used to. It’s good – smooth, mild, has an interesting flavor and while not super-complex isn’t a one note wonder. I enjoy the sweetness of it. DH finds it a little bland (but then I brewed to my taste, not his so that’s not overly surprising) but does like the lack of ‘in your face-ness’. I would drink this again and will probably try other loose pu-ehrs for the times I’m in the mood for something more… savory. But ultimately I don’t think I’m going to start stockpiling pu-ehr cakes in my closet or anything. I’d have this more frequently than any herbal I’ve met so far but wouldn’t be sad if I never had it again. Probably.

Maybe there was a residue of something in his cup? Like a tiny bit of soap or something? That they only thing I can think of.

Hmm, I didn’t think of that… He was using one of our less used cups so that could be it. I was focused just on the tea and couldn’t figure it since it should be pretty hard to make this tea bitter. Your idea is much more likely – will rinse it out well before steep 2. Thanks!

I’ve never tried this brand, but I let pu-erh sit for 15 minutes once and it didn’t go bitter on me. Maybe when they were packaging it up something else got slipped in?

I never really actively disliked pu-erh, but it did take me some time to be able to firmly say I liked it. And hey, some of the best things I like to consume are tastes I had to acquire. Wine, for one. Also, cherry tomatoes and blue cheese. Mmm…blue cheese.

My cup from the same pot wasn’t at all bitter (poured at the same time) so I don’t think something else got slipped it. DH did let his cup sit longer than I did mine but I don’t think that should make a difference since it wasn’t that long.

I still haven’t picked up a taste for wine (or beer) but I’m with you on the tomatoes. Mushrooms, too. Mmm. Mushrooms. So yeah, I’m thinking this one will be something I make a point to aquire because it’s really interesting. But pu-ehr loose only. Not brave enough for cakes. shudders

*slipped in
Oh how I wish I could edit my comments….

I am not certain that I will ever be brave enough for cakes.

Hurm. Well you’ve got quite a mystery. Perhaps Angrboda’s got it correct with the soap.

Or, no, wait! The vicar did it! In the kitchen! With the detergent! Do I win?

Okay, need more help…. 2nd steep – DH had some of mine, I had some of his… they taste different. From the same pot, poured at the same time with both cups rinsed and wiped out. But his tastes a little richer and sweeter than mine and mine taste a little more hay/earthy. We do have different cups with different shapes (don’t think they are different materials). Would that make a difference???

Er…all I can tell you is that pu-erhs can be pretty complex and the flavors often change for me across steepings. Perhaps the concentration of oils or whatever it is that causes the flavor have mixed themselves in different proportions in your cups?

Someone else with more tea knowledge could probably take a better stab at this than me. I almost always brew by the cup and not by the pot.

Hmm… or maybe the cup shape can effect how the oils and flavors continue to develop as it sits in the cup?

I typically do by the cup too but sometimes I try to be nice and share with DH so I make a 2 cup steep and split it… but now I’m thinking I need to get a fair cup. Might eliminate this type of difference?

I’d be really interested to see if that changes it. Makes me wish I knew more about this stuff.

Well, I know smell can impact taste (but I don’t know to what extent) and that cup mouth, shape, etc can impact that (because that’s why they have 2 million types of glasses for alcohol, yes?), so perhaps the cup difference is influencing in that way? In addition to changing how it keeps developing in the cup post-pouring?

Either that or aliens are somehow involved.

It’s gotta be the aliens – or a government conspiracy. ;P

I actually have some pu-erh from Golden Moon coming my way (pu-erh and pu-erh chai, to be exact). Here’s hoping that my cups don’t have a fishy taste!

@teaplz: I think dirt is the more common pu-ehr taste so maybe you’ll… luck out?

I’m not sure which is more bizarre. Fish or dirt. Well, you’ll see my review in the upcoming weeks, and we’ll all have a great laugh over it! My first loose leaf teas are arriving within the week. :)

Yay! And go you for being brave enough for pu-ehr on your first loose leaf expedition! That impresses me. A lot. It took me 2 years to work up the courage… I’m a wuss! :)

Yes! I actually made a small order on Adagio, and when my boyfriend discovered I was getting into loose leaf, he actually ordered me this tea taster’s sampler from Golden Moon and just sent me the confirmation stub in my e-mail. It was incredibly sweet and entirely unexpected.

!! It’s an amazing lovely spread, and it was $20 with free shipping (he found a coupon code).

That’s awesome! Both the sampler and that he ordered it for you – so sweet! I’m so bookmarking that. They’ve got several teas I want to try and that looks like a great way to do it.

For free shipping, the coupon he found was “teareviewblog” (from http://www.teareviewblog.com/) in case you want to make an order some time in the near future! I don’t know how long the code will work, but it really is a lovely loose leaf sampler. :)

@Teaplz, that is an amazing gift, I hope you enjoy it!

@Auggy Arrrggg! Fine! I’ll admit it! I can’t take this anymore! I’M the one who messed with your tea! I did it! I don’t know why [or how, so don’t ask questions]. When you guys started talking about aliens I was going to let you think they did it, but my friend Zarblog [unpronounceable in human tongue, roughly translated] pointed out that I owe him one and so I’m copping to it. I’M SORRY!

Thanks guys! In a few days, the loose leaf journey begins! :3

Hahahaha! You ARE sneaky!

And colorful! I think one of your alien powers is super-package making! :D

@teaplz So happy for you! Golden Moon is going to rock your socks off.

83
Frenchie
5 tasting notes
Wow, what a great and forgiving tea, I make it “all wrong” at work in a 4 cup Mr Coffee machine, once its done dripping the water into the pot I remove it and simply pour it through a strainer into my cup. multiple infusions :-) Yes its a bit “fishy” smelling but once it hits your palate its a whole new game, well rounded, robust, creamy after taste. Good stuff!!