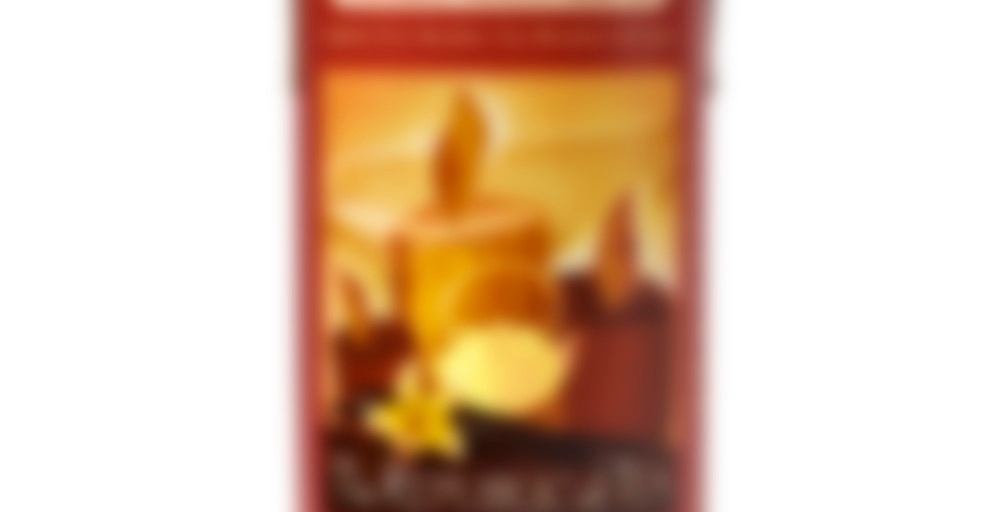 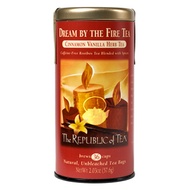 Dream by the Fire

by The Republic of Tea
59
You

As the seasons change, escape from the brisk air with a hot cup of tea. Sweet vanilla and warm cinnamon are blended with caffeine-free rooibos to keep you and your loved ones toasty. Snuggle up to the glow of the fireplace with this tea and let the silent night lull you to blissful dreams.

Fall by the Fire

Fire On The Side

Fire on The Mountain

Rose by the Sea

The Heir by Kristina Moy

The Saviour by Kristina Moy

My first rooibos tea, and it was an okay experience. I received this free sample from Republic of Tea with their latest catalog. I was having a nice wedge of leftover apple pie from Thanksgiving, and I figured that the Cinnamon/Vanilla flavor profile would suit the apple pie’s flavor.

Once brewed, this one smelled a bit like potpourri. Not bad potpourri, just like something that I wouldn’t normally associate with drinking. The rooibos drippings were a dark red in color. Almost scarlet. Very pretty and very festive. The smell was earthy, and a bit medicinal, but in a feel-good kind of way.

The first sip was kind of bland, and a bit floral. The cinnamon and vanilla didn’t really come across strongly – I think the cinnamon was part of the aftertaste, and the vanilla just a hint of sweetness. I’ve been having a really bad time with vanilla teas, and I’ve yet to try a loose leaf one. I can’t stand the taste of artificial vanilla. Or the smell of it. Since I couldn’t really get a grasp on the vanilla here at all, this is inconsequential.

I’m not really sure what rooibos tastes like. So I can’t tell you if it was a dominant flavor profile, or what it was that was added to the mix. The entire thing was fairly sweet, and I’m standing by the potpourri flavorings.

A resounding “meh” from me.

Boiling 6 min, 0 sec
Yours I Like This
8 likes
1 comments
Edit

I just got this yesterday with my catalog! Now I am less excited for it. JKs

Teabag sipdown take 4… This also came as a free sample with the RoT catalogue, although I can’t remember how long ago.

This tastes like a red hot with a hint of vanilla. I can’t taste the rooibos at all through the other two flavors. I’m not really a fan, but this is a tea my mother would love. In fact, I’m pretty sure I’ve bought it for her before, as a Christmas gift.

Made a cup of this after finishing up wrapping my presents. I really liked it. It has a wonderful vanilla and cinnamon flavor. It is very warming and relaxing. It is a great night time tea. This goes on the mental get this at some point in the future list.

I nabbed this as a freebie (sense a trend lately?) and I kinda assumed I’d hate it. Sweet cinnamon tea? Blegh. Yeah, I know, I do have a habit of trying teas I think I’m going to hate. However…

With some vanilla soymilk this is good. It’s cinnamony, but not overly sweet, and the vanilla is present but again, not in an overly saccharine way. I’m really enjoying this as an afternoon tea despite my negative expectations. I like it enough that I could even see buying a tin.

You know how some flavored rooibos’ taste 85% like rooibos? This doesn’t…. I can hardly taste the rooibos component. I’m digging it. (I do like rooibos, but it can be disappointing when it overshadows the alleged flavor gimmick of a tea.)

I was honestly worried about trying this tea because of the negative reviews. I personally think that The Republic of Tea does rooibos well, and I love rooibos.. so I thought, why not? The cinnamon is a bit like cinnamon candy or gum. I don’t normally like cinnamon, but when I do, I prefer the darker, richer flavors. I must say that the cinnamon blends well with the wood flavor of the rooibos. I don’t detect much vanilla in this cup, but I’m content with the mild cinnamon and rooibos combination. It’s a warming cup and its name fits it perfectly! I DO want to dream by the fire while sipping this tea. I don’t think I’d purchase any more of this, but it definitely has me looking forward to the holiday season.

Not bad at all! Quite nice, actually! I’m always wary about teas with vanilla in them, because they always smell a bit off to me while brewing. But the flavor is nice, not too strong. Just a nice, mild sweetness. I may have to invest in some of this at some point (Huzzah for free samples accompanying the catalog!), but I’m not sure I want a whole 30 tea bags. It is very seasonal, and I’m afraid it would loose it’s quality if I only have a few cups a year.

NO NO NO NO NOOOOooooo!!! This was so gross I had to add black tea! BAD!

Very well matched flavors that make for a wonderful rooibos. The Cinnamon and vanilla go great together but surprisingly lack the amount of flavor I would expect. Perhaps a longer steeping time would remedy this but I still enjoyed this tea very much. The vanilla provides a very faint sweetness while the cinnamon is the slightly more dominant taste. I’d prefer stronger flavors but it’s still a tea I’d have again.

Here is another one of those BEAUTIFUL Republic of Tea holiday canisters, the kind that is all shiny and alluring with rich stimulating colors, full of promises about the wonder of what’s inside… What’s inside is a wonder, all right.

The first thing any of us does (or should be doing) when we open a container of tea is inhale deeply. And so as soon as I broke the lovely red seal on this lovely gleaming red and gold canister and lifted the top was breathe deep. Well. The last time I smelled anything like this was in the procedure room in an emergency room I used to work in. The aroma was a cross between disinfectant and cast material. No kidding, it was really unpleasant and almost funny. What must this stuff taste like, I asked myself, knowing that only brewing a cup of this tea was going to satisfy my curiosity. I followed brewing instructions as given on the container, and throughout the brew I was assailed by that same medicinal smell. The liquor comes up a lovely amber, though, and crystal clear. But that smell… I fished out the bag, gave it a moment or two to cool down an eence, and took a sip. There was the smell, but I couldn’t taste anything except a very unpleasant foreground bitterness. I didn’t taste vanilla, I didn’t taste cinnamon, I didn’t even taste that smell. All I got from it was bitterness, with no other flavors or even body to back it up. The directions advise adding a “splash” of milk, so I did. The tea held its beautiful color without greying out, but the flavor did not improve. As a last resort, I dropped in about a half spoonful of sugar, but it didn’t do anything to improve it, either. I nursed the tea until the cup was half gone, and by that time it was down to room temperature. By then, I thought maybe I could pick out some cinnamon from the otherwise bitter emptiness of this concoction, but nothing could redeem it by that time and I poured what was left of it down the sink. Now I have to figure out what to do with the rest of the canister (it was a gift from a very good and well-meaning friend). Maybe some hospital wants it?

Just sipping my sample here…
You can smell mostly cinnamon but you can tell the vanilla is there too. The cinnamon smell reminded me of the cinnamon hearts that you eat around Valentine’s Day.
As for taste, it’s true that rooibos flavour is the main taste but I’m in love with rooibos right now so I’m okay with it. The cinnamon is strong enough to taste it too, and I find the cinnamon taste lingers in my mouth for a few seconds. Vanilla isn’t there so much – I can’t notice it in the taste – only the smell.
If I place another order with ROT, I will include this in my purchase. I just purchased some tea from them so we’ll have to see if I order again while this holiday tea is still in stock.

Boiling 5 min, 0 sec
Yours I Like This
0 likes
2 comments
Edit

I order tea for the bookstore I work in. We weren’t able to get this in because they were already out. I don’t know how much they had to sell directly, but I know they were running low. I prefer Cinnamon Orange and it isn’t seasonal.

I just checked and you are right, they are sold out! They are recommending Cardamon Cinnamon as an alternative. They say the Cardamon is like ginger and pine. Not sure if I’ll try it. The Cinnamon Orange sounds alright but is the cinnamon flavour similar to dream by the fire? I love the strong cinnamon. I will see if there are tasting notes for these other teas now. Thanks for your input, brianfuchs.