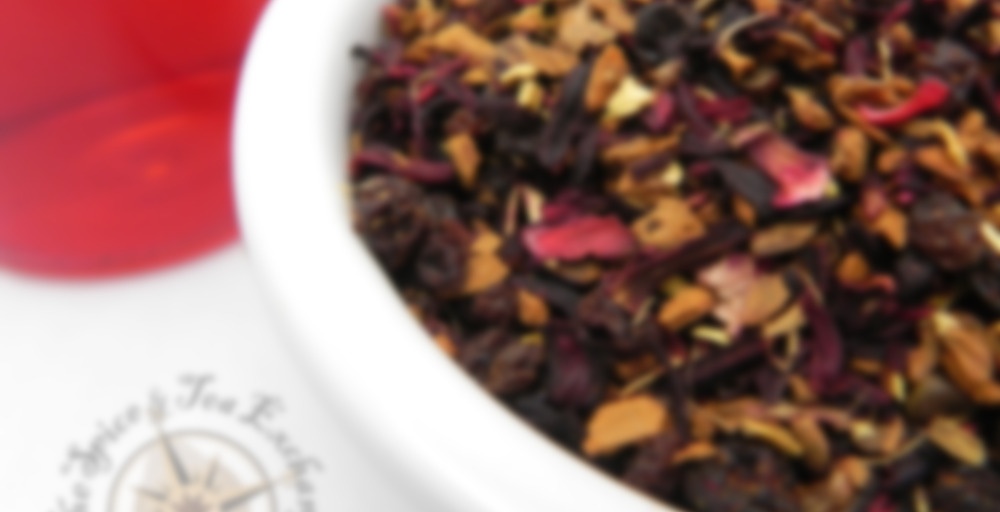 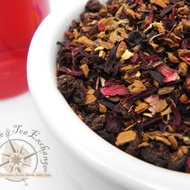 by The Spice & Tea Exchange
67
You

From The Spice & Tea Exchange

I love unintentional surprises!
I forgot I bought this tea last fall during a camping trip to the Smokies. Detoured for a shopping trip in Gatlinburg, TN. I just found it under a bunch of bags of dried beans.
The dry leaf has a nice cinnamon and fruity aroma.
The tea liquor is a deep dark magenta, like pickled beet juice.
The aroma is complex and spicy, mmmmmmmm really lovely.
I was expecting a lot of sour due to the hue and hibiscus but no, it’s rather sweet with a nice spicy background from the cinnamon. I do taste plum and it really goes well with cinnamon. I think that this tea was a great find and I am happy to have a nice rich herbal tea for an evening cup.
I see that several tea companies offer a cinnamon plum blend that I might try as well.
I really like this flavor!

This was gifted to me in a colleague holiday gift exchange. Thank you, Secret Giftee!

I wanted to try a new herbal tonight, as I’ve had more than my fair share of caffeine today. It smells strongly of cinnamon, licorice and something I failed to place, however steeped it’s all cinnamon. All I’m getting out of the brew however is hibiscus, followed by cinnamon, and something… off. Musty, darker fruit? Perhaps this is the plum. Sweetened with some Truvia (1tsp for 12oz), it’s still… yeah, I have to dump this. Sorry giftee, as I know your intentions were only the best.

Sometimes it just wasn’t meant to be! ;-)

Backlog #8 – my last for today. I drank more tea than I thought!
Yay, a hibiscus tea that isn’t overtaken by sour notes! :)
Except instead, it’s all about the cinnamon. No plum… just spice. I’m still undecided. Well, it does seem to be a mood tea. and I do appreciate a spot of cinnamon now and again. and it’s loads better than the Kampai :)
Bah, Toronto water will save it. yes it will!!

Your description of your rating system cracks me up!

Not a fan of this one at all. I adore cinnamon but that is the undercurrent here. I have no idea what the main notes are, but plum they are not to my tastes. I couldn’t even finish the mug. :(

Boiling 5 min, 0 sec
Yours I Like This
6 likes
2 comments
Edit

Maybe it’d be good for mixing :(

maybe the hibiscus ruined it…

This is the sort of tea that I love on cold winter nights. It is like a warm, thick fruit cider, but is wholly unique from the typical spiced apple cider. This tea has a rich hibiscus base with some plum-flavored notes, and a nice warmth added from spicy cinnamon. The tea has a bit of a tart and spicy bite to it, but is still naturally sweet enough to drink sans sweetener. A great tea if you like hibiscus teas and want a warm spiced fruit cider experience.

Coincidentally, I was looking at a tisane, perhaps by Rishi with the same name.

Ah, I didn’t know Rishi had this blend! While I enjoy Spice and Tea Exchange’s blends I’ve always found their tea a bit over-priced, so once I need to restock this one I think I will try Rishi’s version and see how it compares. Thanks!

TeaEarleGreyHot
Delete
I am still drinking this and loving it! You all discovered cinnamon plum before I did, but I have since bought more and keep it handy on the shelf. This is a tea that I always sweeten with splendor, a rare thing for me.

Before looking this up, I thought this was a black tea base — not a metric buttload of hibiscus.

Suprisingly, it doesn’t kill the cup as much as I was thinking. This is really all about the cinnamon, and it’s really a potent cinnamon. There’s a definite tart note that settles behind the cinnamon. Then the sweetness of licorice. And somewhere behind that is the note that suggests plum, but in an under ripe not terribly plummy kind of way.

I don’t hate this and it definitely wasn’t awful enough to pitch the cup. But boy am I glad I only have two cups of this to get through.

Did I mention it was snowing today? Because seriously.