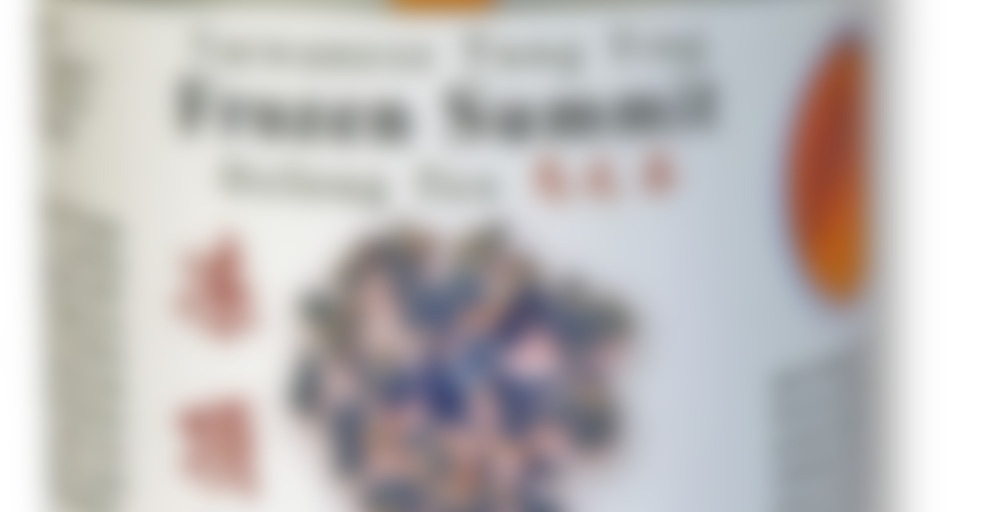 Also known as Tung Ting, Frozen Summit is grown at our farmer friend’s three acre farm in central Taiwan. These smaller farms are typical in Lugu, the native home and largest tea growing area for oolongs in Taiwan. The tea plant varietals in this area were originally transplanted from Fujian province in mainland China. However, over years of cultivation the plants have developed into their own universe of local varietals and provide distinctively unique flavor profiles

This is solid classic Oolong. Just drank the last of my batch. Name is very fitting for the 2 feet of snow we got today.

Song(Rolling in the Deep) Which could be how this Oolong is made.
The first thing that popped on the cbc radio2 while drinking this.
http://www.youtube.com/watch?v=lazyDlfaptM&feature=related

Love the song and probably the tea. Might pick this one up just just for the Adele/snow/contemplation combo. Her music is very oolong friendly, when I think about it.

Thanks for playing along!

Whenever she sends us packages, Mom likes to fill the space with things from her cupboard she thinks we’d like. When we got this tin, it was about a third of the way full. Since then, we’ve managed to bring it down to less than a sixth. What can I say? She called it! With a nice dollop of honey it’s a nice even tea, perfect for cloudy afternoons.

I got a small tin of this delectable tea as part of a box of three sampler tins (also including a tin of Ben Shan Oolong and one of Tie Guan Yin) at the Tower of Cosmic Reflections Teahouse at the Lan Su Chinese Garden in Portland, Oregon. Sadly, the purchase of the sampler box has given me a lot more joy than my visit to the Chinese Garden did, as I was accompanied by my parents who spent their entire visit complaining about the family we were staying with while in Portland. I love my parents, but it wasn’t easy to enjoy Portland with them. Anyway, I digress…

This is (as the other commenter noted) classic oolong tea. Though I thought the package’s recommended brewing time of 4 min. was a bit much, I gave it nearly that, in a mesh strainer in a stoneware thermos-like mug from Teavana. It smelled like generic oolong in the tin, but the brewing/brewed leaves have a rounder scent than some oolongs, with lots going on: the normal vegetal smells, but also an almost meaty, savory smell. The liquor is a medium greenish-gold. A sip reveals that the smells were not misleading: yes on the vegetal, yes on the flowery (though not much for an oolong), but also a sort of soupy savoriness. I feel like I could add vegetables and some salt and have a light dinner going! This element makes this a very satisfying tea with high drinkability, enhanced by the complete lack of bitterness.

As far as I can recall, I’ve never had this particular kind of oolong before. No idea whether this cup’s savoriness is normal for a Tung Ting. If so, I could see keeping a good example of a Tung Ting around regularly. We’ll see if/how this one insinuates itself into my current tea rotation!

This was my latest sipdown. I bought an ounce of this tea last year because I was looking for an affordable Dong Ding oolong suitable for regular consumption. While this tea did not end up being bad by any means, it wasn’t complex or substantial enough to fulfill the role I intended for it. As Dong Ding oolongs go, it was rather lightweight.

Prior to the rinse, the dry tea leaves emitted aromas of cream, sugarcane, vanilla, and baked bread underscored by hints of grass. After the rinse, I found hints of orchid and fresh bamboo shoots on the nose. The first infusion introduced a slight aroma of banana. In the mouth, the tea liquor offered up notes of butter, cream, vanilla, baked bread, sugarcane, grass, and bamboo shoots. The subsequent infusions introduced a definite orchid note on the palate. New impressions of violet, daylily, daylily shoots, minerals, banana leaf, cucumber, and custard also emerged. The later infusions retained notes of minerals, cream, sugarcane, and grass with the occasional hint of banana and/or daylily shoots.

I would be interested in finding out more about the origin of this tea and how it was produced. I know that both Cui Yu and Jin Xuan among other cultivars are grown in the area that produces Dong Ding oolongs. I have also read that many producers of high mountain oolongs often utilize a blend of cultivars in the crafting of each of their seasonal releases. Due to this tea’s creaminess, subtle floral qualities, and largely vegetal character, I would be willing to bet that this is either a Jin Xuan or a blend with a heavy Jin Xuan presence. I could be wrong, but this tea kept reminding me of a lightly roasted Jin Xuan. Overall, I could see this tea perhaps making a decent introduction to Dong Ding oolongs, but to be honest, it is not something I would go out of my way to reacquire. Though it was certainly drinkable, there are better Dong Ding oolongs on the market.