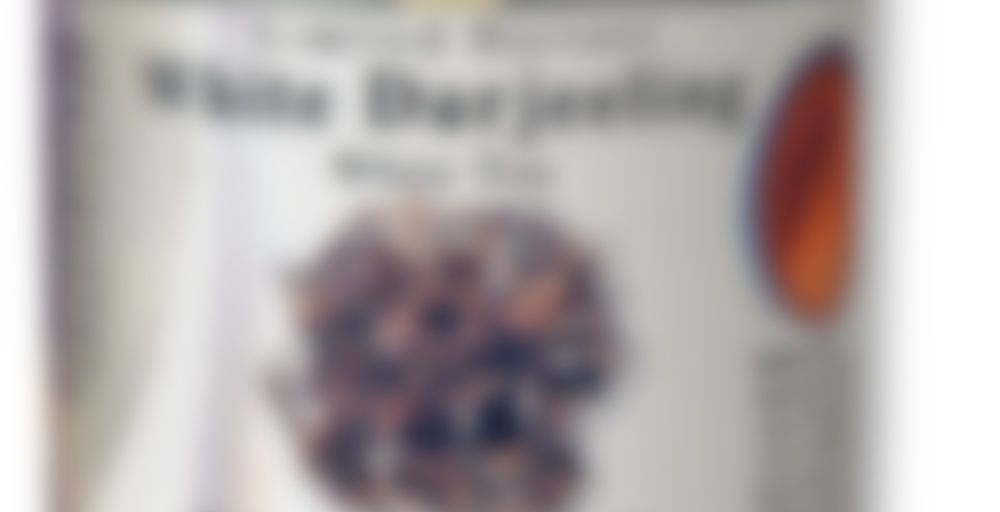 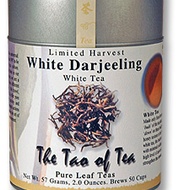 Introduction: Grown in one of the oldest tea gardens of Darjeeling, a famous tea producing region of India.

White Tea
White teas are made from the newly sprouted buds with a silvery white down that provides a honey texture to the brew. In making white tea, the buds are heat braised in covered pans or dried in direct sun. As such, there is little or no oxidation of the buds. White teas are also high in antioxidants.

Darjeeling History
Located in the Northeastern Himalayas, Darjeeling is an area regarded to produce the “Champagne of teas.” It is one of the four main tea growing regions in India and the highest in elevation at 6000 feet. The area comprises approximately 86 tea estates covering three districts (Darjeeling, Kurseong and Kalimpong), with almost 30 percent now offering certified organic teas. The Darjeeling tea industry at present employs over 52 thousand people during the plucking season which lasts from March to November.

Flora
Darjeeling is a plant lover’s paradise: Four thousand species of flowering plants, three hundred varieties of ferns, including tree fern and many types of mosses, conifers, spruces, birches and of course, the prized orchids.

Making White Darjeelings
In 2000 we initiated a project in Darjeeling to make white teas. We believe it was one of the first such projects for the Indian tea industry and included identifying appropriate tea plant varietals growing across the various tea gardens in Darjeeling. In general the tea plant varietals can be categorized into the Assam Jaat, China Jaat and Clonals. Secondly, we focused on quality processing. In most of Darjeeling’s tea estates processing was being conducted in a very similar manner. After withering, the leaf has traditionally been passed through mechanical rollers to bruise and start oxidization (a process that makes the leaf darker). As such the leaves get broken, and the flavor profile filled with complexity. We defined a new process, cross-pollinating white tea making skills of China to make Queen Darjeeling. It would be an ‘apples to oranges’ comparison of White Darjeelings to that of Fujian Chinese whites. Both have their own flavor profiles and distinct, enjoyable qualities.

We have a very small quantity available of this batch.

This is the first white tea I have had in a long time. Normally, I stick with traditional Chinese white teas, but when I saw this white Darjeeling from The Tao of Tea, I could not pass on it. I love Darjeeling teas and really wanted to try something new, so I was more than a little intrigued by a white Darjeeling. Fortunately, this curiosity purchase was well worth it.

When it came to preparing this tea, I was a little unsure how to proceed. In the end, I opted to brew this tea gongfu style. I know that some people would raise an eyebrow at the idea of preparing a non-Chinese tea gongfu style, but I did this for two reasons that seemed solid enough to me. First, I had never brewed a white tea gongfu style prior to this, so I wanted to see how it went. Secondly, I thought brewing a tea like this gongfu style might focus the aromas and flavors more than a Western preparation. After a brief rinse, I steeped approximately 5-6 grams of loose tea leaves in 4 ounces of 170 F water. I followed this initial infusion with 6 subsequent infusions with an increase of 5 seconds per infusion (15, 20, 25, 30, 35, 40 seconds).

In terms of both aroma and flavor, the first infusion was very strong. I detected a faintly grassy, herbal aroma underscoring more pronounced scents of Muscat grape, white peach, apricot, cream, oats, fresh flowers, and mild spice (somewhat reminiscent of nutmeg). On the palate, there were well-integrated notes of apricot, white peach, Muscat grape, honeydew, cream, honey, nectar, butter, oats, and nutmeg, with hints of grass, hay, and herbs on the finish. The next two infusions offered more of the same, but with way more balance. I definitely noticed a subtle increase in the strength of the grass, hay, and herb aromas and flavors. The final four infusions saw the tea moving away from its pronounced fruity and floral character toward alternately creamier, grassier, and more herbal aromas and flavors. From the third steep on, I also noticed a subtle minerality begin to emerge. It grew a little stronger with each subsequent infusion, but never really dominated the nose or palate. Instead, it was always underscored by traces of most of the other aromas and flavors.

To be perfectly honest, I could probably have gotten at least 1-2 more infusions out of this tea, but opted to cut my session a little short. I could see the direction the tea was headed and felt confident that it did not hold any surprises for me at that point. I like this one. As a matter of fact, I really like this one. It has some of the fruitiness of a Darjeeling, but it also displays the subtlety and depth of a good Chinese white tea. I can honestly say that it kind of reminded me a little bit of the more familiar Silver Needle white teas from China, but with more sweetness and a more fruit forward character. If you are a fan of white teas and want to try something a little bit different, I think this tea could really hit the spot.