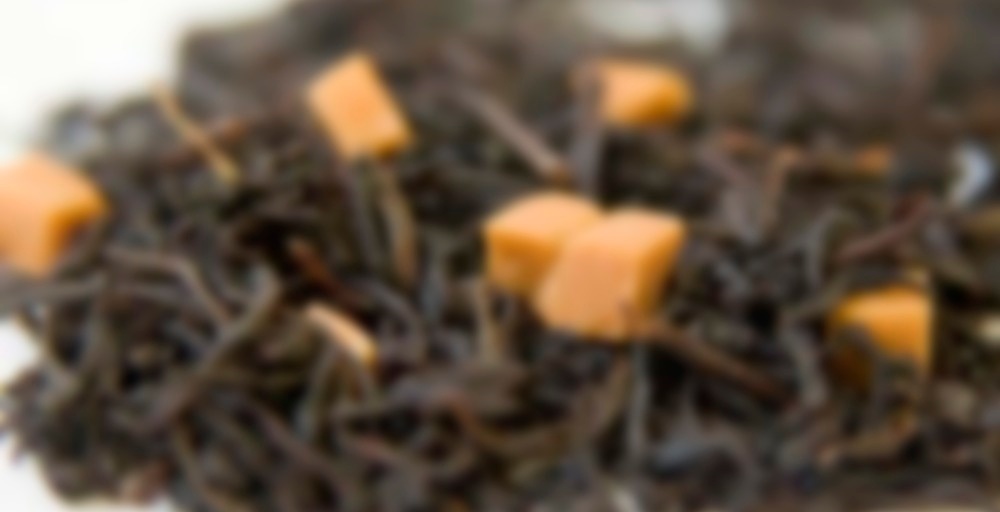 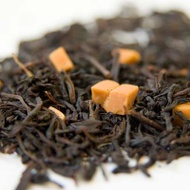 This delicious, aromatic dessert tea is a blend of premium black tea with real pieces of gourmet caramel that quickly melt into the tea. Gently sweetened, with an enigmatic aroma, this tea is wonderful with milk or on its own. This tea yields a deep burgundy liquor and slightly creamy body. (Note: the caramel bits in this tea contain sugar).

This tastes more like creme and less like caramel to me, but I love how rich and flavorful the black tea base is … and the creaminess of this cup is really delicious. The caramel is more like an undercurrent of flavor that is sort of there the whole time, but really emerges toward the end of the sip …

I hope all is well! Miss your frequent notes!

Do agree, please come back soon :)

Wow, it has been quite a long time :/ Also hoping everything is ok and perhaps it’s just Steepster issues that have kept you away!

Thanks goes out to QueenOfTarts for this morning’s sample of Creme Caramel.

There are small bits of caramel in this blend, which provides a nice sweetness to the brewed liquor. Brewed at the below parameters, there’s no hint of bitterness. The caramel flavor is enhanced with a little addition of sugar, but I don’t believe it’s strong enough for milk.

I recently ordered some samples from the Tea Spot and, on a whim, decided to throw in this flavored tea as well. As I’ve noted elsewhere, I don’t usually care much for flavored teas. The dry leaf was a bit malty and sweet, but didn’t leave much of an impression.

I first tried this plain, with no sugar or milk. The flavor was very nice like this, but I wanted to see where it could take me. I added a small amount of sugar and suddenly the caramel was much more prominent (as tends to happen when adding sweetener). It wasn’t until I added a splash of milk that I felt the tea was fully rounded out.

I just got the chocolate tea sampler from 52teas and am looking forward to exploring the world of flavored teas in a nicer capacity where the flavor of the tea itself is a considered component in what flavor it is and how flavorful it is.

I don’t know if you ordered a sample of the Organic Chocolate “O” from The Tea Spot, but it’s one of my favorites. They use a single estate Hong Maojian black for the base, and it’s a great blend.

Tried this one on Saturday when hanging out with Dinahsaur. Had this one shortly after having 52teas pancake breakfast. Personally I liked this one a little less than pancake breakfast, but I thought that the two seemed very similar.
Enjoyed this one with some milk and sugar. Once I make my way through some of the redonkulously large amounts of tea I have gathered, this one will most likely make its way into my cupboard as a permanent addition.

This tea is disappointing, not because I have very high expectations for this particular blend, but because I enjoy The Tea Spot. This one just didn’t live up to other Tea Spot teas I’ve had. The black tea base is smooth, but a bit bland. The caramel flavor is more of that burned sugar taste, not the rich, buttery caramel I’m looking for. The finish is a little nutty and only slightly astringent. It reminds me a bit of a stale cookie. Yuck.

This was better today than it was the last time I had it, but still not a favourite. Brewed for 4 minutes and it was just starting to get bitter. The caramel note was very faint, but I didn’t have a cube of caramel in the spoonful of tea I brewed. I still have a 3/4-full tin of this so I’d better gift some or it’ll never get used up!

Made this tonight as my dessert tea. The smell was rich. The first cup I had plain and could taste the delicate tone of the caramel with also a buttery warm taste. The second cup I added almond milk and enjoyed it this way too.

This is a nice smooth black tea with a little sweet kick of caramel. Good black, but a bit of cream and sugar with it is tasty too.

A sipdown. I’m having a really hard time finding the caramel in this this morning, and I can’t say I’m all that sad to see it go. It’s mostly just tea with a slight aftertaste of caramel. There are plenty of other caramels in my cabinet to replace it.

This is a great dessert tea. I make it with a good shot of milk and sweetened with sugar. It reminds me of dulce de leche ice cream, but much more fitting for winter weather.