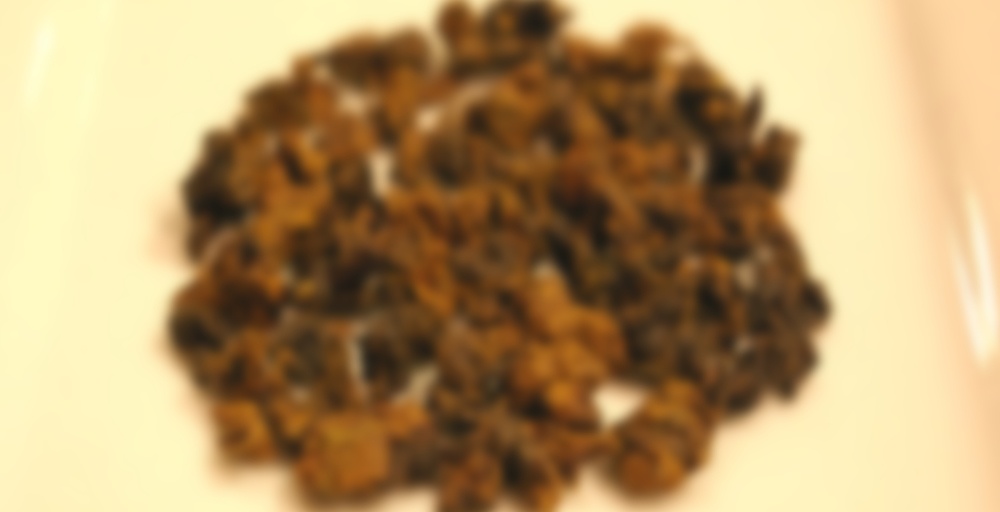 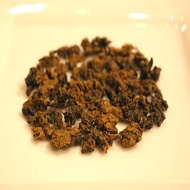 by Tillerman Tea
79
You

Taiwan is known for their delicious oolongs so this is no surprise that this black tea made from a cultivar usually used to produce oolong teas is one of our favorites. From the Bihlu Tea Gardens in Nantou County, Taiwan, this organic black tea is another wonderful example of tea master KC Chen’s skill. The Purple Bud is high oxidized, producing a wonderfully fruity aroma and taste. Strong hints of orange peel and cinnamon balance with the nutty, spicy, woody tastes of this robust tea. This is a perfect breakfast tea or for pairing with rich desserts.

Brewing Suggestions:
Use between 3-5 grams of tea, about a teaspoon. Pour water between 175° – 195° over the leaves and allow to steep for 1 to 3 minutes. Always remember to adjust steeping time depending on water temperature, amount of tea you have and personal flavor preference. Increase time and temperature slightly with each infusion.

This looks like oolong… Small hard pieces that goes:“kling – kling” when you drop them in the pot.

I could drink this at breakfast!

Wow, this is so incredibly different in appearance and dry fragrance from the past couple years! It is no longer a tightly balled tea with the looks of an old-style dark Tieguanyin and is no longer evocative of dried apricots prior to brewing. Now it’s a wiry, dark, twisted-leaf tea with the looks and smell of a small-leaf, charcoal roasted Wuyi Yancha or a particularly roasty Yixing Gongfu Hongcha. Now it is immediately identifiable as a red/black tea the moment the bag is opened. I really thought I got the wrong tea in the mail and even called them up to verify that this is what this year’s is like.

So why am I okay with this having the same name and not bothering to create a new entry to accommodate a different style? Well, first it’s because it’s by the same producer from the same plants. Second… I would have a hard time telling the two versions apart by taste. Color is a bit more crimson in the first infusion but back to the red-orange brown coloration of its previous incarnations in subsequent infusions. Aroma, taste, tactile impression, nose… they are all right in line with tasting notes I’ve made before. Sweet, perfumey with ripe apricot and prune qualities, and lingering woody spice notes. Charcoal fragrance does not appear in the cup at all. Won’t change the score since this is still really good. I’m impressed that the flavor isn’t obviously different after the rolling style has changed so much.
Brewed 4g/100mL with 95C water for 1min-1min-1min.

I have to say the name of this amuses me, it sounds like something you would get from a pot dealer. Sounds yummy though!

I wonder if it uses anthocyanin-laden leaves like the Purple Bud pu-erh from Yunnan.

Yup, and it definitely has similarities in flavor when said Yunnan is processed as a Dian Hong.