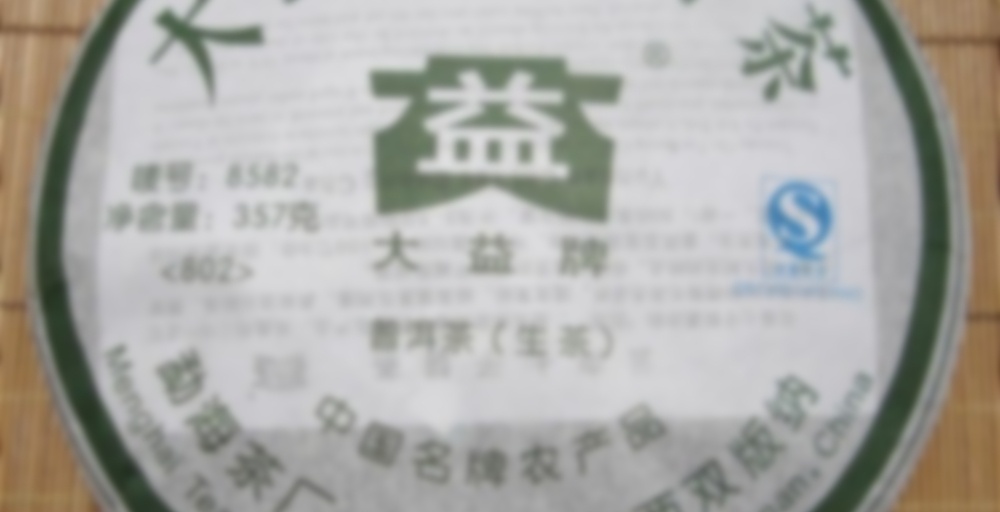 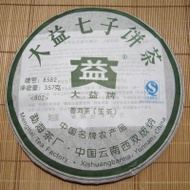 A classic Menghai tea factory recipe that was first introduced in 1985 for direct sales to Hong Kong Nian Tian company. 8582 Raw Pu-erh Cake use larger mature leaves inside for this cake, the tea has a very refreshingly sweet and smooth aftertaste, gives rich taste and swallows extremely well. Great potential after a few years of aging.

And Puerh Plus Box #4 has arrived and we have 2008, Menghai Dayi 8582. Using my 80ml yixing, I rinse the tea once and then gave it a quick flash steep to open up the leaves. But I tasted this infusion anyway. It was really clear, sweet, wood and just a touch of bitter on the back end.

First infusion I got a slightly darker, almost light honey color, Its just starting to show age on the tea now. Its still tastes pretty young though and has a little bitterness on the end still. The flavors were oak, wet wood, bitter, mushrooms? And a tiny bit of sour, just a teeny bit.

Second infusion was much the same with more woody tones coming out now, I guess thats to be expected in a mid aged raw. I think the guys over on TeaDb called this pencil shaving flavor…

Third infusion much the same, its staying pretty consistent with flavor and aroma, maybe a bit more mushroom. Im getting a teeny… tiny hint of medicinal at this point.

IM guessing based on this, this one is going to steep out 10-14 times at least. I get the feeling Im going to be drinking a lot of tea and get a little tea drunk the next week. For this tea, I think a few more years would make this spectacular.

There are at least three listings for Tuocha Tea, so I just chose one and went with it. I actually started this yesterday and I am still drinking it but thought I would post. This is less than half the price on Tuocha Tea as it is elsewhere.

I kind of messed up the first mug. I used boiling and a 45 second steep with no wash. The leaf smelled like wet carpet and the cup was very bitter and drying. My fault. Beyond the eeewww, this is a little sweet, and a little woodsy.

The second 10 oz mug at 10 seconds is pretty good. The wet leaf is a pleasant woodsy mushroom with a hint of smoke. This is sweet. It feels a bit syrupy. The taste is of stone and mushroom. This is a very enjoyable cup with nothing off-tasting.

The third mug at 20 seconds is stone and mushroom, and I detect a light smoke late in the sip. This is the best cup yet.

This is a raw puerh, and it still has some of that sheng brightness, but it is aging nicely and seems pretty decent.

i really like it. its nice and smooth, perfect for everyday drinking if you stick to lower temps and short steeps.

Yeah, learned my lesson – do the wash