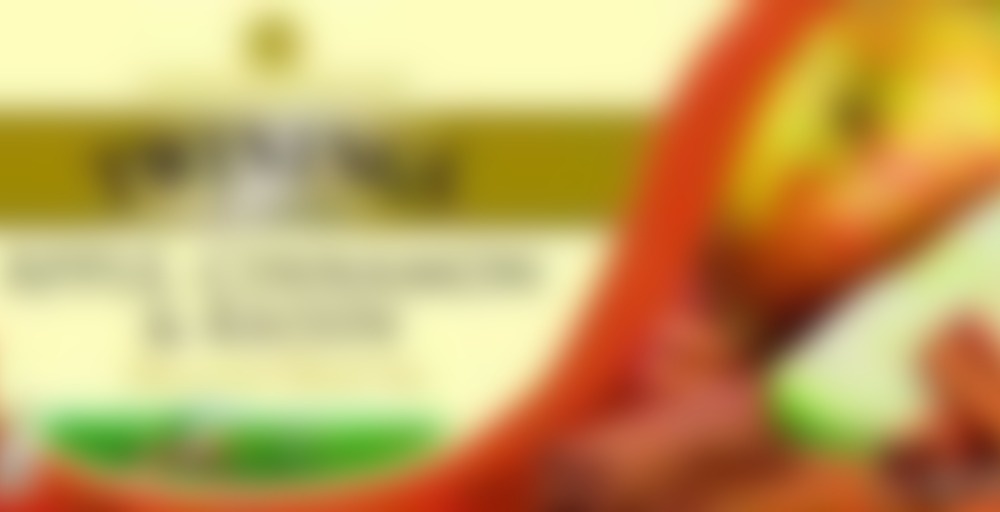 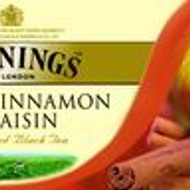 A unique blend of tea complimented with the flavour of Apple, Cinnamon & Raisin.

I ‘stole’ one teabag of every Twinings tea I haven’t tried yet in a hotel the other day. Shhhhhhhhhhhh ;)
This one smells awesome. Mmmmm apple pieeeeeee. Downside of it is that I’m hungry instead of thirsty after steeping and smelling it.
Tastes good – of apple pie (apples, cinnamon and raisins) but the black tea is veeeery vague. It’s a good fruit blend. But as TeaEqualsBliss said more like juice. I’m sure it would be yummy cold. Sweetened too.

So i really like it as a drink and that’s what counts for me but it’s not very tea-like. I’ll still rate it good cuz it’s kinda yummy :) And I’d gladly drink it again. But with a piece of apple pie on the side.

I don’t actually like this much. I’m not a very big fan of cinnamon in tea and I don’t really care all that much for raisins, but it’s a bag so it’s quick and it seemed the ‘warmest’ choice I had in those criteria.

I’ve been outside, giving my ruler some fresh air. Turns out my 30cm estimate was pretty accurate. And it’s STILL snowing. Great big flakes now. Yes, I whimped out when faced with snow and train delays again. I love the snow and I love getting a day off, but I kind of hate getting the day off because of this. It always comes with a side of guilt. Maybe the train would have come if I had just waited five more minutes before giving up. Other countries have way more snow than us regularly and they get by. Is 30 cm really that much? And so on and so forth. I know I’d be faced with O.o looks if I’d shown up at work, but still! (I did actually manage that once. 45 minutes late and nobody said, “Hi, good to see you arrive safely!” or even “About time you showed up!” All I got was " You’re here?!!! What are you, NUTS???" Nice to know they care.)

It’s pretty much just synthetic cinnamon that lacks any sort of sweetness and sour apples. I can’t find any raisins at all. Given the fact that as mentioned I don’t care much for raisins most of the time, I can’t really make myself see this as an all that bad thing.

The tea itself is… peeks into cup … are we ABSOLUTELY sure there IS any tea in this? checks box They claim there is. I’ll give them the benefit of doubt.

All that said, it IS a mass-production tea in relatively cheap bags, so of course it’s a different quality than what I’m otherwise used to. I’m rating it seen in that light and disregarding most of my other things instead of trying to compare them, because they’re worlds apart.

Are you sure it deserves a rating that high? ;)

Compared with other bagged teas, yes. Because the overall taste is actually pretty much okay. Even if all the other aspects are… off.

Fairly bleh. I mean…I can SMELL the apples and cinnamon…and I can taste them along with a hint of raisin but there isn’t a tea taste at all…would probably be better iced, I guess. It’s more of a juice.

This smells exactly like hot apple cider that you can get at those pumpkin farms during autumn. Unfortunately, there’s not nearly as much taste as there is scent, but it’s enjoyable. Adding a bit of milk and sweetener brings out the apple and cinnamon flavors, enough that I’d buy another box for this winter.

I quite enjoy this one.

It’s a lot less fake-tasting than many teas I’ve tried, and has become affectionately known as “that apple cake tea” among my coworkers, who never have their own tea and keep stealing mine. The tea flavour is quite mild, but I mainly drink this for the mellow spiced apple taste.

Of course it doesn’t quite compare with some of the loose leaf blends I own, but for drinking in the office or bringing with me, on those miserable, wet autumn days, this is actually one of my favourites.

A little faint for a black tea. The smell of cinnamon and raisins is there, but in all, it generates a kind of sweet smelling brew that disguises the taste of the actual tea. Those who like iced tea might enjoy this one better.

I love this tea. Had it for the first time this summer in Holland and have been looking for it ever since. Can someone please email me with where to find it? Thanks!!!

One of the first non-herbal teas I tried. Good flavor, but a bit too mild for my taste.

Smells perfect, like a hot apple pie.
The taste is sweetish, with strong apple notes and a bit of cinnamon and raisins in the background..
A bit too watery, but generally not bad.

I really like this flavor reminds me of fall and apple pie. Nice taste, I drink it in daytime.