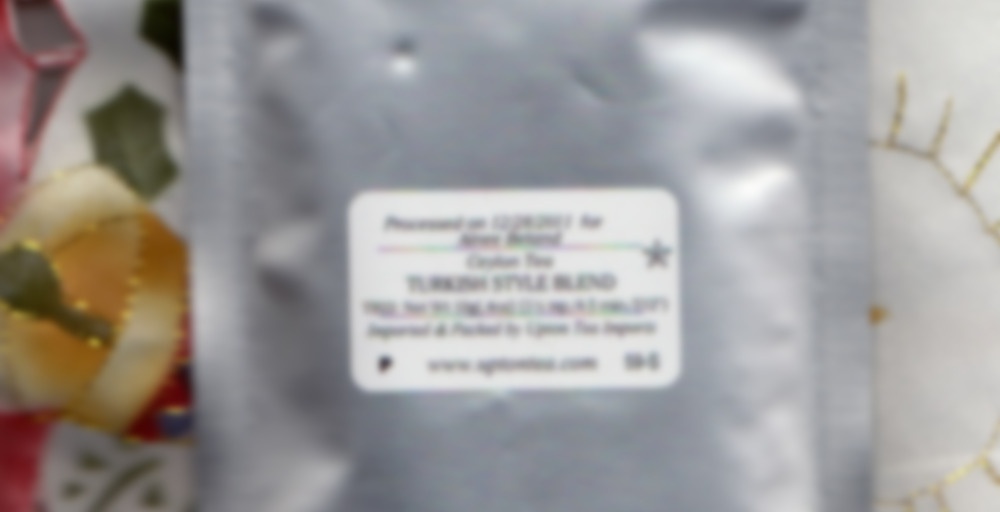 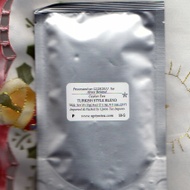 by Upton Tea Imports
78
You

A proprietary blend of Ceylon teas created to mimic the style of tea produced in Turkey, which is rarely, if ever, exported. The bold leaves have the faint aroma of vanilla which is also present in the creamy-smooth cup. Infuse for 4-5 minutes to drink straight, or longer if the addition of milk is preferred.
Origin:
Sri Lanka

This tea is chockablock with flavor! Especially for a straight-up UNFlavored Black tea! I’m totally digging this one!

There are gentle smoke flavors mixed with sweet wood and something reminiscent of subtle charcoal. This tea is crispy and semi-chewy, even. There are lovely vanilla flavors that donate a hint of creaminess to this tea experience. It’s also a little sugary, too, which point in the direction of caramel notes. It’s not a DARK Black tea – almost a combination of black and oolong.

I love that there are many things going on here. This is unique and different and I like it very much!

Dry leaves smell like fruit. Non-specific fruity-ness. Both I and another Tea Club buddy noticed it.

Steeped for rather a long time as I got busy and lost track, but it was still smooth and light. Sweet without being sweetened, and definitely fruity. Again, can’t name the fruit it reminded us of – just fruity. I wasn’t around long enough to try the 2nd steep, but the reviews I heard were good. They said it was lighter, of course, but still good.

Wow, I ordered this one today too. That’s two in recent reviews today.

My tea of the morning….

The adventure continues!~ It would be interesting to see how long I could go just trying new teas with the samples in my cupboard! Some I purchased, but the bulk of them are from generous Steepterites out there. I will probably need a staple tea here and there, but I think I will try to do at least one new tea a day for a while. It should be fun as I have many varieties of green and oolong that I don’t normally drink (and I finally have my kettle situation sorted!)

This one is like roasted caramel. Definite slight caramel/vanilla notes with a tinge of smoke. I really like this one and it is a Ceylon base rather than a China black. The liquor is a little lighter than I would have expected, but the taste is much richer than it looks. As for price, it is just over $4 for an 80 gram pouch. I think it is probably a more fluffy tea…don’t laugh at my classification! As a result of measuring by volume rather than weight, I think I probably use a little less tea, but this one works. On the shopping list it goes.

Thanks to BrooklynSheep for this sample.
Processed on 9/19/2011 for Emily -——
Ceylon Tea
TURKISH STYLE Blend
Tea package has a K kosher star on it.
www.uptontea.com

The sample has crunchy leaves in it.
I put some in a mesh ball
Added water.
I enjoyed it! No sugar, honey, milk added.
Nice breakfast tea.
Reminded me of English Breakfast tea, Lipon or an Orange Pekoe.
This tea has flavor. Yum!

Glad you liked it!

1/28/14 Morning tea. 3g/6oz/212F/5min. I made a large pot of this, and it is drinking very nicely with milk and sugar. A great straightforward tea. The brewed tea is an attractive dark amber, a pretty taupe with the milk in. The aroma and taste are tea, with a faint masala like spiciness that boosts the drink from ‘oh its tea’ to ‘Ahhh, tea.’ I’m happy I have so much of this tea! I think I’ll try a stronger infusion next time I brew this.

We wanted a second pot, so I tried a progressive brew on this – I added 3 tsp of fresh leaves to the spent (about 5g), and steeped for 6min. 212F. The second pot was very nice – a little richer, and completely free from the bitterness that progressive brews are prone too. Very happy!

Kind of bored today and stuck inside because of hot weather, time to try some tea (iced to be exact, but I’m going to sip it hot first). This has Ceylon tea in it. I haven’t cared much for other Ceylon teas I have tried in the past. BUT WAIT…what?! This is good, definitely surpassed my expectations. Tastes pretty roasty, caramelly, and perhaps woody/earthy? Has a creamy mouthfeel. I gave some to other people and they all liked it as well. My re-steeps didn’t turn out as strong as i’d like though.

This is a proprietary blend of Ceylon tea created to mimic the style of tea produced in Turkey, which is rarely, if ever, exported.

I took one spoonful of the tea leaves, which are finely crunched/curled and place in my cup and poured hot boiling water into the cup and covered it for five minutes.

After the set time had elapsed I remove the cover from the cup and begin to take in the tea’s appearance. The leaves have unfolded and are dark in color, darken green. Tea’s color is dark as well. I remove the leaves and poured the tea into another cup to try and take in its color. It is darkish in color and smells faintly of caramel. Well, it is smooth in taste upon first sip of the tea. I am happy it is not bitter. Teas’ texture is creamy and a hint of vanilla is in the background. There is a smokiness to the tea and this makes the caramel more pronounced…I mean there is a bite to it when swallowing. It is a creamy liquor with lasting taste of caramel with hint of vanilla lingering in the background.

I am very surprised to find that I like another tea produced by Upton Tea Imports. This Ceylon tea is exceptionally made and I think adding a touch of milk to it would soften it even more. I, however, prefer it plain and very hot.

OK, I made it again, with more tea, for more time. It’s nearly the same, maybe a tad more flavorful. Maybe. Maybe this batch is different than what others drank, maybe all the sriracha has finally killed my tastebuds, but I’m sticking to my earlier tasting note. This tea is light and lemony and perfectly fine. I wouldn’t order it again, but I won’t mind finishing it.

I’ve been saying maybe all day, can you tell?

Very smooth and not bitter. I think I may have underbrewed it since the liquor is not as dark as I expected – since I am new to loose leaf I am still figuring things out. Another reviewer covered their mug, which I did not do, so perhaps I am letting too much of the heat escape? Good breakfast tea, with a bit of honey for me.