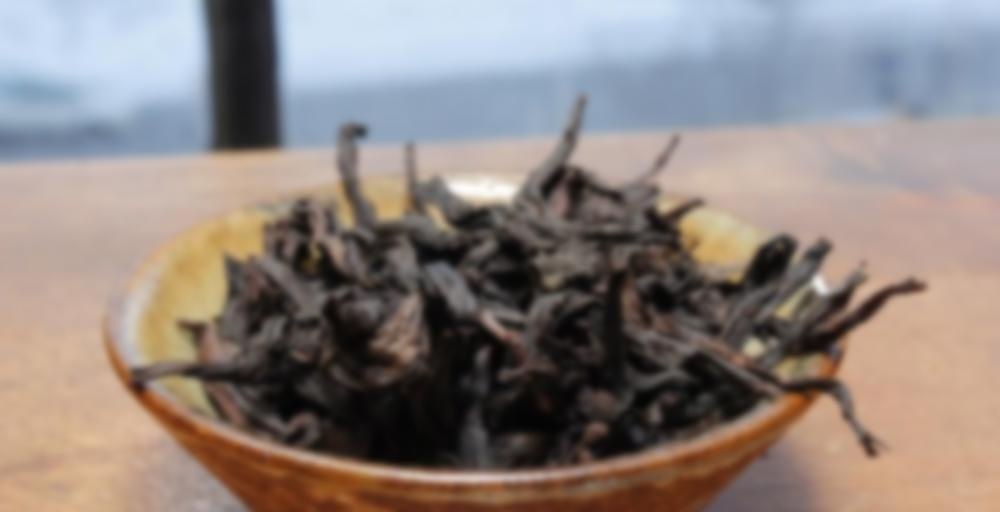 by Verdant Tea (Special)
75
You

We asked Master Bi of the One Word Tea Club to provide us with one of the fine Wuyi oolongs in his collection, described the Reserve Club Project and entrusted him to pick something suitable. When he sent this aged Rou Gui, we were delighted. When you get into the highest end of Wuyi oolongs, the experience becomes less of the forward caramel and roasted notes that more common Wuyi tea has, and more of an aftertaste experience.

This tea is all about the dark deep warmth of the aftertaste, which lingers on long after your cup is empty. The signature cinnamon notes of Rou Gui are present, but linger as a sweet spicy taste on the sides of the tongue instead of up front. Later steepings yield notes of Dark Chocolate. Master Bi knows Wuyi like nobody else we have seen. We look forward to highlighting more stars from his collection in the cold months of the year.

Having another round of this in an effort to drink down my verdant reserve teas. I don’t love this one. It’s a decent enough oolong but nothing amazing for my particular taste buds! I may need to pass the rest of this on to my tea sister terri since she loves it more :)

This oolong is from the Reserve TOMC, January.
The leaves of this one are so beautiful, with a rich burgundy cast to them, & of course they are wild looking! The aroma today reminded me of peaches, maybe roasted peaches, & red fleshed plums.

The warm aroma of this one is so heady with fruit & a hint of cinnamon, & the tea itself has such a juicy fruity flavor, again of peaches & plums. My mouth is left with a sweet stone fruit aftertaste, like I just ate a bowl of cobbler. This tea also makes me think of umeboshi plums.

Later the flavors are briefly chocolate & fruit, & then as the leaves wane, more of a mineral taste, but even then there is a lightly salty rich brothiness to it. This has been a beautiful tea, & I only have enough to enjoy it one more time, but enjoy it, I will!

It is a really nice Oolong! :)

Without my realizing it was happening, my taste in tea and my desire for it has changed.

In the beginning, there was a glittering path with lots of tea all of which I was ready and willing to try out. You could say that I binged on tea much like a child in a candy shop.

I soon realized that some tea’s I was binging on tasted better than others. The best tasting tea’s rose to the top and became the tea’s I craved!

As my appreciation for tea developed, I found that the tea that I loved the most were often harder to acquire. Tea from small farms, seasonal or wild picked soon became part of my new love affair.

This past month in particular, I’ve had some of the best tea’s of my life. Oolong from Verdant and Mr. Han’s Black, a Red Blossom 2010 Wuyi Oolong and Taiwaniese Wild Mountain Black Tea from Butiki have all been outstanding.

The experiences drinking the tea’s stopped me from writing as much as usual. These moments go by quickly, and I need to pay attention to the voice of the tea’s I’ve been drinking. It is very important to be still with good tea.

I kept the steep time rather short with this Oolong. 5 seconds on the first steep after a rinse, then 10-15 seconds.

I’ll discuss the flavor in a somewhat static way…

Fine tea produces that longing for more. A desire for more than flavor. A desire for the entire experience that reaches a quiet place inside.

I put this on the ol’ blog too… www.teaandincense.com

Drinking this at work today – I don’t drink enough oolongs, need to work on that.
I hadn’t really explored aged oolongs until Sil was generous enough to include some in the last package she sent me. Thank you.
I really like this – it’s more on the black side than the oolong side, but still has some of the typical oolong taste to it. It’s just nice and balanced – not too sharp, not too metalic, a little spice at the end – really nice cup of tea. :))

Standard disclaimers apply: dark oolongs are not my jam, and wuyi even less than dan congs. They just don’t make my heart sing, but I can still enjoy my gong fu session with them. I am also not in a super analytical mood today, so maybe not the best time to do a real tasting note, but I wanted to log it anyway.

This is from the reserve club, January. The warmed dry leaves smell a little charred and minerally, with definite plum/prune notes in the background. My rinse ended up being longer than usual (maybe 5 seconds), so I drank it and I’m glad I did. Someone posted recently on the discussions about only enjoying the first steeps of teas, and it made me think of how much usually enjoy the rinses of my teas. I feel like I’m throwing out so much flavor if I throw them away. Anyway, the rinse wasn’t super toasty, although there were definitely some of those notes in there, and not minerally at all. More fruity, and a woody.

Later steeps brought out the charred wood flavor more, along with the rocky minerals. A few steeps in I had a nice, lightly sweet one that I enjoyed. Someday I want to go to Minneapolis and have a gong fu session with David on some of these teas, just to really experience them as they should. Although I know the steps well by now, I am still convinced there is some error in my gong fu.

I agree re: drinking rinses. I have no problems throwing out the first rinse of a pu’erh, because often those wash away some ickies, but for oolongs and whatnot, I also feel like I’m throwing out a bunch of goodness! Especially if the rinse is more than just a literal rinse, i.e. pouring water over and off the leaves.

(Also, I’m dying to participate in a gong fu session with someone who knows what they’re doing as well! A trip to Minneapolis sadly is not happening anytime soon though).

First of all, these past two weeks have been incredibly busy, so I haven’t been posting about the teas that I’ve been drinking. Today I decided that I was going to try this tea. I put a nice ammount in a cast iron teapot, and let it steep for 30 seconds using near-boiling water. Even though I have a bit of a head cold right now, the the roasted aroma of the tea was easy to detect arround the pot.

Anyway, when I first took a sip, was was amazed at the smootht texture of the tea. I’ve found that the first cup of aged Oolongs can be a bit…stale, but this was perfect from the get-go. The initial flavor of the tea is that of a deep, dark roasty flavor, something that I adore, and the middle flavor has a interesting spicy tingling. It’s a bit early to be judging it, since the roasty flavor is dominating the palate right now, but I bet it’s going to be very pleasant later. Finally, the aftertaste lingers forever. I love Wuyis, and this aftertaste is the perfect balance between the roasted flavor and the smooth mineral texture that characterizes these teas, and it’s really a cut above just about everything else I’ve ever had. The only thing that compares was the Big Red Robe that David sold a while back. I went through the pot really quickly, and I’m really anxious to see what the next steeping tastes like.

The second steepign was prepared the same as the first, a little longer than I would have liekd, but I got distra—Oh look, snow! anyway, the falvor has mellowed a bit, yet it retains that smoothness and deep roasty flavor. Teh aftertaste has lightned up, a bit less roasty and a bit more mineral, and the result is pretty much a very pleasant improvement.

Third infusion, 45 seconds, near boiling water. The spice has resolved into something a bit like cinnamon, and I’m actually really liking the taste. The tea starts with a smooth yet balanced roasted flavor, and then the cinnamon starts to dance arround the surfaces of my mouth. The amazing thing is that it’s not overpowering like cinnamon tends to be in food. Finally, the aftertaste linger in my mouth with a gentle mineral taste, starting out very mild but strengthening over time. The third steep is usually the best, but this greatly exceeded my expectations. If this is the type of stuff that the One Word guys drink regularly, I envy them.