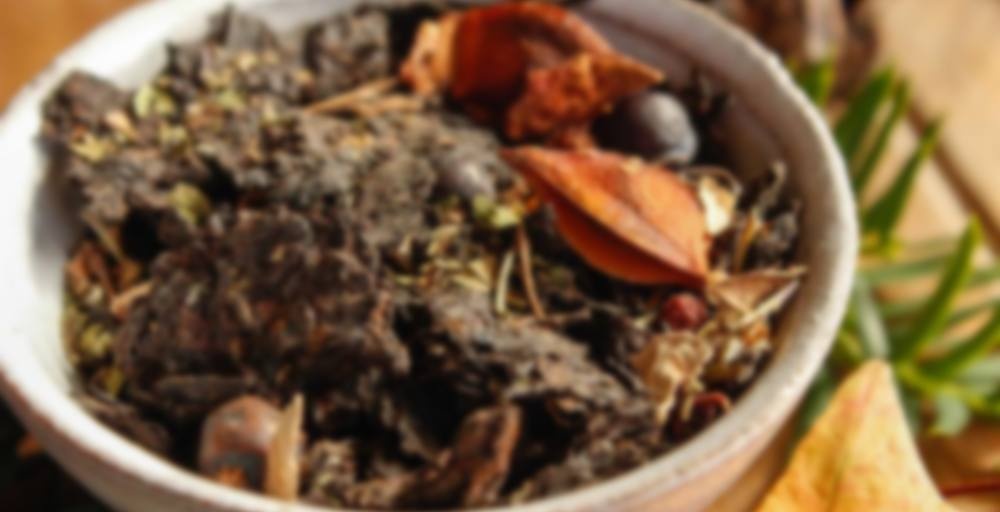 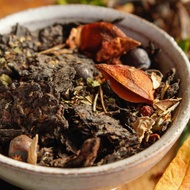 by Verdant Tea (Special)
73
You

sipdown on this one. 1 out of 3 for the first month of verdant’s blend club is ok i guess. Not a fan of this, though i do like it more than the norther wild one. I tried this one cold to see how that fares and sadly it a whole lot of star anise, which i don’t mind in moderation but it’s overpowering even the mint in the cold brew heh.

So since my experience with Northern Wilds was not the greatest earlier tonight, I am having a cup or two of this one now! I enjoy the dry smell of this one, the mint and juniper are at the forefront giving it almost a eucalyptus like scent, and a dark foresty smell is also present.

I steeped about 2.5 tsps for 1 min with boiling water. The first time I had this I was a bit unsure about the scent steeped, as the anise is definitely present along with mint and the woody pu’erh, but now it seems more natural.

The flavor fully embodies the idea of a forest grove. Cool mint, with spices, and a mildy sweet aftertaste. The juniper berries are in there as well. The pu’erh is mild but provides a nice base for the herbs. This is fresh, woodsy, and pure. I’m not sure if this is my favorite blend of the three October blends or Campfire Blend, they are pretty close though!

The first time I tasted naturally blended flavored tea using herbs and spices I was hooked! These tea’s came from Verdant (two years ago, I don’t know anyone else who was doing blends like this!).

I’ve played mixologist myself from time to time, and Pu’er is my favorite tea to use as a base when I’m being creative. I love steeping tea multiple times and pu’er allows me to do this.

When I saw the packet of Master Hans Forest Grove…I chose it as my first tea to try because it was a pu’er blend (my favorite).

Pleased at the addition of star anise, this spice is often overlooked but adds an exotic, truly Asian character that I love.
(I would have added more!)

The first steep was light and cooling, lifted by the airy mint.

I expected the second steep to be more intense as the pu’er released it’s liquor which didn’t happen. The second and third steep were only slightly stronger than the first.

My impression was of a cool walk through the forest in early Fall after a rain. The coolness mint. The peppercorn, juniper and birch bark scent released underfoot while walking, breaking twigs in the damp forest mulch.
You would not come across anise in the forest but fennel fronds release a similar aroma.

The tea is soft and smooth…very quiet.

I kept thinking as I sipped the tea, that I should cold brew the leaves. There’s something very refreshing that would be better cold than hot. Coolness that goes beyond the obvious mint.

Many pu’er’s when iced are like diving into the purest mountain water and once you’ve tried it, you’re hooked!
I’m convinced this will be one of those best cold blends!

Sipping this one, I understand why spearmint was used in the blend… but it’s nasty. I cannot get past my intense dislike of spearmint to appreciate anything else. Peppermint would be exactly the wrong flavour here, though.

My recommendation, is that it needs more actual tea.

Aww. Maybe you can swap it, seeing as it’s limited and rare.

There is an intended recipient already. I just wanted to try it first!

You know what is suboptimal for getting sipdowns done? Eating something bad last night and having a still-not-happy stomach this morning. Ugh. So even though this isn’t on my sipdown list, I broke it open because it has mint in it, and will hopefully help my stomach settle.

For a minty-herby tea, it’s not bad. No really my thing unless I happen to have a stomach ache, but decently tasty. At first I though the puerh in this would turn me off of it especially since when it was fresh brewed and very hot it smelled a lot like earthy shu, but that has calmed down quite a bit. Very herby, a bit medicinal. Basically what I was looking for this morning… at least I had it around.

Trying my first tea from the Verdant blend club I am sharing with BrewTEAlly Sweet!

Looks like a couple other people have written tasting notes on this one but no one wants to give it a rating! heh.

The spearmint and tulsi are the prominent notes here, with the warmer spices and puerh itself taking a back seat. Not a bad blend, but I think personally, this morning I was hoping for something with a stronger darker base note. I’m still on my first steep, so maybe the 2nd will have a little more oompf to it. I will give it credit for being very forest-like!

Like Bonnie said, I imagine this would be excellent chilled :)

This tea fits the imagery of a forest grove in the fall impeccably. Minty and cooling, earthy and mulchy, with very slight fruit and spice notes. The star anise was a nice addition, offering a bit of Asian flair.

It seemed that the pu’er couldn’t really stand up against the sheer amount of other stuff going on in here, though. Every once in a while I thought I found it. Earthy and rich. And then just as soon it was gone. I felt like I was playing hide and seek with the actual tea component here.

This tea was not very good at all once it hit room temperature.

I brewed this with 140°F water for about 10 minutes. So, I didn’t follow the guidelines this time, but I was curious. I think it came out much smoother and more minty this way.

I have discovered that I tend not to appreciate Puerh tea. So, I was hesitant to try this. However, the addition of the mint and tulsi is great. The taste is very earthy with a minty and juniper main body. Definitely a thicker feeling tea. This tea is so smooth and slightly anise sweet. The aftertaste is very short and pleasant.

This tea was definitely interesting and fun to try. I preferred the other two though. Northern Wilds was awesome!

I tried this one the day it came in — it was a minty pu-erh kinda day. And while objectively I can tell this is a good blend, and I enjoyed the pu-erh and the mint, and I love the look of the big black peppercorns… it has anise, and I just don’t do anise. (Ick. >.<) I gave the rest of the package to my boyfriend, who enjoys anise, and also swears he can barely taste it in this blend. Oh well. To each their own…