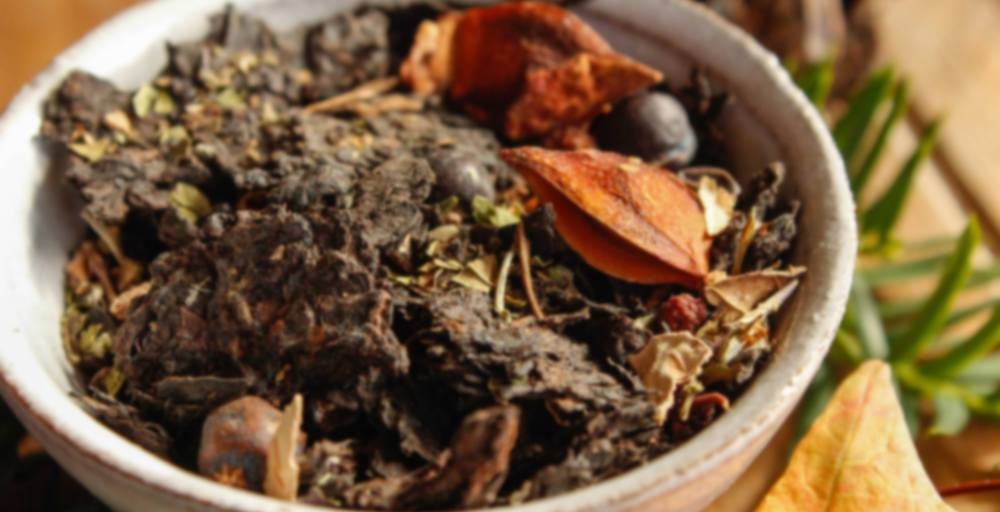 by Verdant Tea
78
You

Anyhow…. yuck. Do not like. I tried a sip, and it just didn’t appeal to me in the slightest; the mint and juniper made me cringe. However, I fed some to my mom, and she seemed to enjoy it just fine, and drank a re-steep as well. So it looks like this tea will be re-homed (and I’m not sad in the least about this!) So basically, if these are tea ingredients you enjoy, this tea may be just fine for you…. but I do not enjoy them. At all. Withholding rating because it just wouldn’t be fair to give it a 5…

ETA: I see there’s another version of this, without the apostrophe. When I get around to it, I’ll get Jason to merge the two.

Thanks BrewTEAlly Sweet for letting me try a sample of this.

It’s interesting. I can taste the puerh and spearmint and tulsi.
And the peppercorn and just possibly the star anise.

It’s forest-y, that’s for sure. And it’s an interesting idea, but I don’t know that I would go out of my way to get more.

A sample from Miss B. I was in the mood for gin this morning, but there being none to to hand I had to settle for tea with copious juniper berries instead. This one fit the bill perfectly. In actual fact, it appears to be at least 85% juniper berries. There’s a scattering of spearmint leaves, the tiniest bit of pu’erh, a few peppercorns, and only the tiniest quantities of the other ingredients (birch bark, tulsi, anise and cardamom). I used 1 tsp for my cup, and gave it 4 minutes in boiling water. I crushed most of the junipers first just because they’re better that way.

To taste, this is like a fresh, foresty chai. The main flavour is juniper, no surprises there. I love it, though, so I’ve no complaints about that. Second comes the spearmint, sweet and cooling, followed by a touch of earthiness from the pu’erh. I think that’s where the “forest” vibe is coming from – it has that characteristic wet leaf/forest floor flavour that can be so appealing in pu’erh. The spicing is more prominent than I thought it would be, running throughout the mid sip and lingering long in the aftertaste. I can clearly taste cardamom, star anise and pepper, which is surprising given how little there was of it amongst the dry leaf. I can also taste something that’s reminding me of black liquorice (and thankfully it’s not my nemesis liquorice root). Altogether, it’s a better combination than I was expecting – unusual, but very drinkable, and the flavours work super well together. I’m really pleased to have had the opportunity to try this one!

That sounds really good! Licorice is actually flavored with anise these days, so that’s probably what you were tasting. Anise has fewer health concerns than licorice root, so at some point everyone switched over.

Thank you again for the sale, Dinosara! Another odd blend. Ingredients: Master Han’s 2002 Shu Pu’er, Birch Bark, Cardamom, Spearmint, Tulsi, Sichuan Peppercorn, Star Anise, Juniper. I thought this would be more like a chai, but it’s not tough enough. I used two teaspoons… there were a TON of juniper berries in those two teaspoons. I’m not sure if they impart much flavor. This didn’t seem like a strong pu-erh either. The steep color was a light rusty brown. At least there wasn’t any bitterness from the birch bark like the other Verdant blend with birch bark. Otherwise, it’s spearmint and licorice. Both the spearmint the licorice make my tongue buzzy. Yep, it’s odd. The second steep has even stronger licorice. A good blend but not fantastic.
Steep #1 // 2 tsps. // 4 min after boiling // 2 min steep
Steep #2 // just boiled // 3-4 min

Thank you to whoever sent me a sample (all of my samples have been mixed up..) The dry leaf smells like licorice. This is an interesting tea. There is licorice with a touch(a really tiny touch) of berry sweetness. There is a nice earthiness to it along with a herbal feel to it.