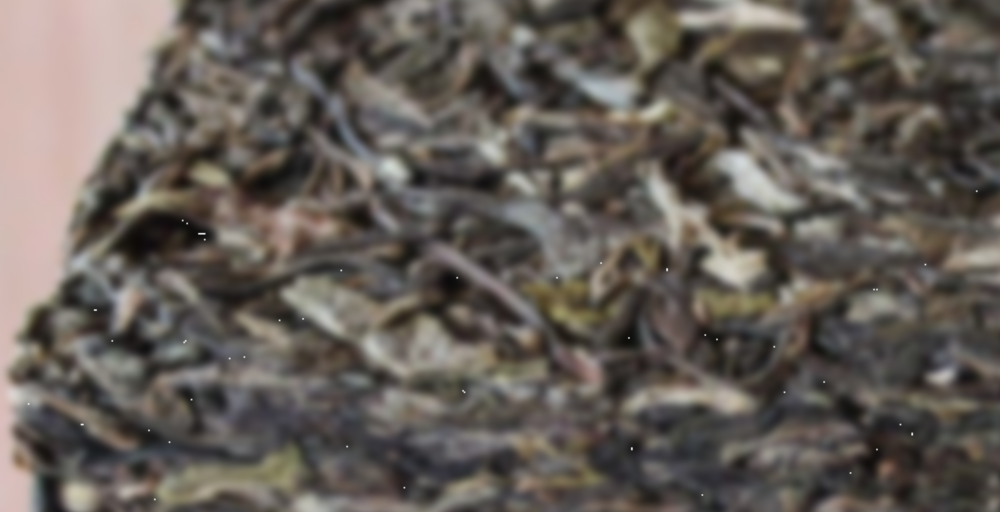 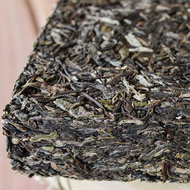 by Verdant Tea
79
You

Got this tea as a sample from LiquidProust. Brewed the whole 8.7g in my 100mL gaiwan. First couple steeps were pleasantly sweet a slightly grassy or vegetal flavor. Then some bitterness kicked in, and lasted about 3-4 steeps. Flavor became more like hay or straw and it still retained a sweetness in the aftertaste. Also got a few kind of spicy notes, perhaps like pepper. The remaining steeps tasted of sweet hay, like the last few but sans bitterness. The flavor dropped suddenly off a cliff after around 11 steeps, but I was able to coax another couple straw-like steeps out of this one, though they were significantly mouth-drying. Despite the fact I used over 8g of this one, the body was not particularly thick.

I found this towards the back of the Pu storage, and I can’t remember if I like it or not. The leaves are mostly broken up and fairly dark. They give off a dry and smoky scent. I plucked a handful and tossed in the warmed yixing. The scent darkened and spread out to a heavy wood and smoke. I could hint at some light sweetness in the background. I washed the leaves once and prepared for brewing. The steeped leaves give that bitter greens scent that has some bite to it. The brew begins soft and sweet with some subtle tones. I’m hinting at some light pepper in the background. The second steep I over did by about 10sec and it made a huuuge difference. The brew hit me real hard and sent goosebumps down my arms. Also, I experienced a lot of head shaking and a big woooef sound escaped me, haha. The later leans more toward the pepper side with a nice sweetness that lingers. This tea has a consistent hay and dried grass tone, and the drink grows lighter as the session progresses. Surprisingly, I was picking up a “yerba mate” taste at about the fifth steeping. This flavor consists of herbaceous, dry grass, and straw. The brew gives the dry sweet texture until it falters off. The qi is a nice light and steady feeling. The sensation is very slight and almost unnoticeable. I’m indifferent about this brew. I think it’s a decent daily drinker.

For some reason, I thought this and the Qianjiazhai 2015 brick were the same tea, so I had my tastebuds all set for all those flavors…especially the fruity ones!

Turns out, this isn’t it after all. I’m kind of disappointed, but thus is life, right?
There is a mild sweetness, like meadow grasses, and underlying bitterness like a peppery olive oil, a little savory roasted plantain chip, and an herbaceous sage-like flavor.

I’m about 15 steeps in or so, and it has that refreshing high energy that I love so much from Sheng, good tea buzz happening, and the brew is getting a little sweeter. There is a little evergreen taste, maybe pine (not camphor), pumpkin seed, catnip, even a hint of lime, and that “sparkling fresh water from a lovely spring” kind of feeling.

Nothing wrong with it, I’m enjoying it now that I’m into it. It is both energizing to the body, and soothing to the tastes, kind of like the old herbal teas I used to drink back in the day.
This is, of course, a very young Sheng, and Master Han has never let me down, so I’m sure it will be interesting to sample from time to time and see if anything changes.

would love a sample of this one tossed in to my box :)

Which reminds me, I need to start a new box for you ;)

I was surprised as well at how different the brick and cake were, but the notes on the Verdant site do seem to hint at this.

TeaEx, I actually thought that the Zenghuan Dongsa Brick and the Qianjiashai brick were suppose to be the same tea… I knew the qianjiashai cake and brick were different though.

Terri — Sorry … got confused with my earlier note.

On-topic: I also thought the Zhenyuan Dongsa and Qianjiazhai bricks were the same. Looks like I need to split my database entry for these into two different teas.

uh terri you need to drink…your box is overflowing lol

I received a sample of this with my last Verdant order. Thank you.

I don’t drink a lot of sheng. I’m trying hard to like it, but most young sheng is too bitter for me. The older ones seem too musty. I have a ton that I haven’t tried and keep avoiding them. Tonight I pulled this one out. Really happy that I did.
This is awesome – almost perfect for my tastes. It’s really mellow and smooth – zero bitterness. It’s just a hint earthy, a touch of grass/hay, and a little something that I’m relating to white wine. I really really like this one.

oh good to know. often i find myself in the same boat as you with sheng.

is this the sample marked “sheng brick”? Cause I got one, but I don’t know what it is specifically.

My package was marked “spring brick” – I didn’t know what it was either but Verdant commented on my IG photo saying it was this one….

I’d imagine it’s the same then. I ordered from verdant two days after you ;)

This is a young sheng at this point (8/2015), and has fairly typical flavors, and although light, it is complex at the same time. It has a touch of bitterness which coexists with a hint of sweetness, and has an astringent mouthfeel that I think will mellow with time. I like this tea and will be interested in tracking it over time.

This is one of the two Master Han teas I ordered from Verdant before the move. This one is just ok. It’s really, really light. Less sweet/fruity, more spicy/smoke/tobacco. Not bitter, but just not super flavorful. I definitely prefer the Qianjiazhai, and I will be getting some of the 2015 sheng brick when I place another Verdant order at some point (but probably not the entire 500 gram brick!)