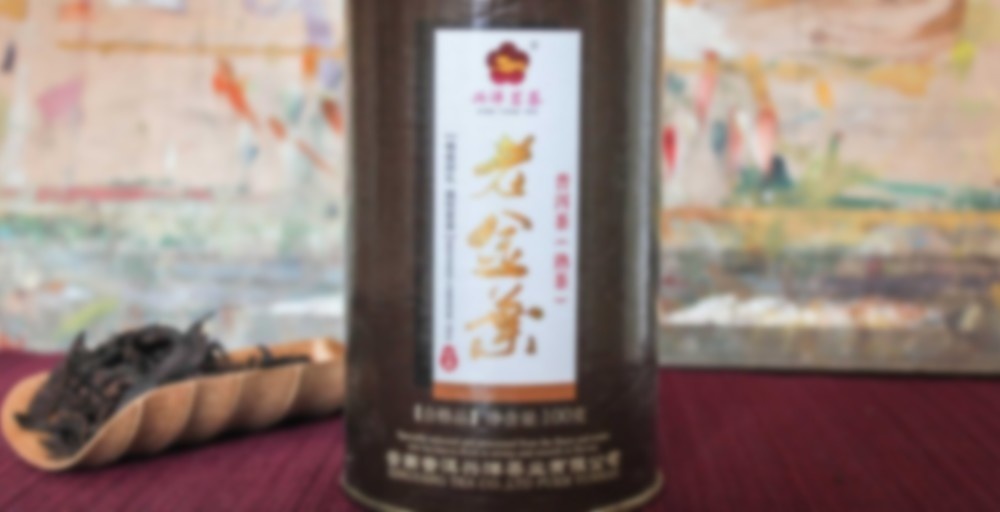 by Verdant Tea
75
You

This tea is Xingyang’s crowning achievement. It is made with big leaf picked from thousand year old trees. The loose leaf is stored and slowly fermented in low moisture over one year and finished in 2003 for another eleven years of dry fermentation before being packed in 2014. The result is the sweetest, cleanest and deepest shu pu’er we have tried. This tea can be steeped over twenty times and yields a beautiful clear brew with a deep forest flavor and lingering aftertaste.

From Ku Cha House of Tea 87

It’s been quite a few years since I’ve had an older Xingyang shu, so I’m pretty excited to give this a try! The leaves are absolutely massive and quite beautiful. I’m not getting much aroma from the dry leaves. Maybe some light mustiness. After a quick rinse the wet leaves smell of leather, tobacco, and wet leaves.

1st, 10sec: Leaves are still waking up, so this is pretty light. The liquor has a very nice aroma of spice, vanilla, fruit, and must. Wow! This is reminding me why Xingyang made me fall in love with shu puerh. Despite the light looking brew it’s already got a creamy body and an incredibly luxurious, rich, and sweet bourbon vanilla flavor.

2nd, 20sec: Still very rich vanilla flavor, but some of the fruit flavors are starting to arrive. There’s an apple aroma to the brew and an apple and peach mix to the tasting notes.

3rd, 30sec: Even as this tea starts to open up and darken it brews incredibly clean, with a crystal clear light orange liquor. There’s a really bright and crisp apple flavor at the front of this sip. There’s still plenty of vanilla character and a hint of some sweet spice, like cardamom. There’s a nice calming qi that’s starting to awaken at this point.

4th, 40sec: We’re starting to add some more flavors to the mix and it’s a bit less sweet. There’s some bread flavor rising on the first sips, which fades to a gentle camphor cooling and some medicinal eucalyptus notes. I’m taking this session a little slow because there’s a surprisingly strong qi that I want to both savor and not be overwhelmed by.

5th, 50sec: This is another fruit forward brew. Lots of apple flavor. I don’t taste any spice during the sip, but there’s a strong mix of spices that hangs on the tongue long after you’re finished sipping.

7th, 1min 30: A really powerful aroma of juniper berry came out of nowhere. Flavors of vanilla, apple, and some mineral.

8th, 2min: The juniper berry flavor from last steeping is fully setting in now. This is an incredibly sweet round, with mixed berry flavors. I’m almost reminded of that fake “blue raspberry” flavoring, but that makes it sound bad and it’s quite enjoyable.

9th, 2min 30: Some soft, musty vanilla is bringing me back down to earth after that last super sweet brew.

10th, 3min: The aroma has taken on a medicinal smell. The musty vanilla has notes of cinnamon peaking out from under it.

12th, boiled: I didn’t want this session to end, so I had to give this a try! It turned out nice and dark and tasted fantastic. This is a very doughy brew with notes of spice. Exactly the flavors that I fell in love with when I had a my first Xingyang years ago.

After some meh young shu from Xingyang, this older tea is such a good reminder of why they made me fall in love with shu. Super sweet, rich, and satisfying. I think I’d probably prefer a higher leafed, dark brew with some more savory and bitter notes to contrast the sweet, but this was still a wonderful session. And the great taste was accompanied by the most perfect qi — gentle, calming, blissful. I can’t believe their aren’t more notes about this tea on here — it is seriously delicious!

There are interesting flavors in here. Unfortunately, they’re hidden behind the taste of hamster bedding and ashes. I gave it 2 rinses and 4 steepings to mellow out before calling it quits.

Clearly, this is not the tea for me.

I’m starting to worry I’m the only one still drinking Verdant tea I’ve had to add so many of their teas to the database.

Oh God the difference a decade makes. Anything older than 2006 is always so fundamentally different from anything younger.

The leaf is like nothing I’ve seen. It is big, soft, largely intact.

The dry leaf has almost no aroma at all except a deep, base note earthiness.

The wet leaf is ancient forest soil after a steady autumn rain. But there’s no “storage humidity” here, amazingly enough.

The cup is sweet, dusty, thick, lingering and soft.

This.
This is tea.

Yes. I have noticed you are the only one writing about them.

I find that sad. The teas they’ve offered for years are wonderful and the new teas they’re bringing online are even better — including some newly sourced pu-erh which will be much more solid in terms of provenance compared to what a lot of people are drinking and without resorting to Westerners stepping in to produce the tea themselves (which bothers me as a business model).

The sheng Olympics will have some of their new ones in it.