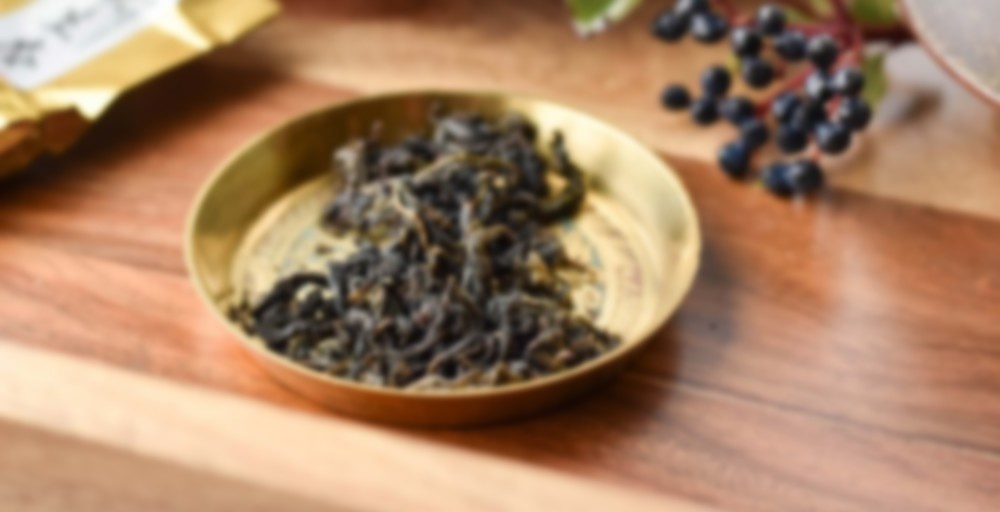 by Verdant Tea
78
You

This tea is based on Master Zhang’s research into very early Anxi oolongs that used the ‘Wulong’ or Ruan Zhi varietal leaf, a half-rolled/half-strip style shape, and a very meticulous turning and fluffing process that goes further than most modern tea would.

In this experimental offering, he has applied his research to the Tieguanyin varietal and provided enough roast for a deep rich aroma (non xiang). The result is a tea full of roasted chestnut flavour, and a soothing licorice and ginseng note complemented by sweet tropical florals. This exciting offering brings out a truly unique side to Tieguanyin that doesn’t come through in more modern processing techniques.

I took a few notes over Christmas and managed to stuff them in my backpack which kept them from getting lost during my move. The notes are pretty sparse, though.

So begin the short notes.

All I remember about the characteristics of the tea was how smooth it was and perhaps understated yet complex with the fruit flavors (I know I was missing a lot of what was there). I’d definitely try a more focused tasting if some magically landed in my cupboard.

Here is yet another backlogged review. I finished a sample of this oolong last month (on October 30th, to be exact). This tea was part of the experimental Tieguanyin series Master Zhang first released through Verdant in the autumn of 2016. Prior to trying this tea, I had tried three of the other teas in this series and found two of them very enjoyable. With that in mind, I was somewhat eager to see how this one stacked up to the others. Overall, I found it to be a respectable tea, but I have had more enjoyable traditionally-styled Tieguanyins over the course of the year.

I prepared this tea gongfu style. I started with Verdant Tea’s recommended brewing guidelines and then modified them to fit my preferred approach. After a quick rinse, I steeped 5 grams of loose tea leaves in 4 ounces of 208 F water for 6 seconds. This infusion was chased by 14 subsequent infusions. Steep times for these infusions were as follows: 9 seconds, 12 seconds, 16 seconds, 20 seconds, 25 seconds, 30 seconds, 40 seconds, 50 seconds, 1 minute, 1 minute 15 seconds, 1 minute 30 seconds, 2 minutes, 3 minutes, and 5 minutes.

Prior to the rinse, the dry tea leaves emitted aromas of cedar, roasted grain, and light char. The rinse brought out scents of flowers, spices, and toasted rice. The first infusion introduced clearer hints of violet and saffron on the nose. In the mouth, I discovered mild notes of toasted grain, toasted rice, and cedar accompanied by hints of violet and saffron in a tea liquor that was smooth, creamy, and somewhat buttery. There was a pronounced sweetness and grittiness to the aftertaste. The subsequent infusions brought out impressions of watercress, caramel, minerals, orange peel, cream, butter, and darker fruits like blueberry and/or raspberry. The sweetness and grittiness of the aftertaste remained and began to remind me a bit of ginseng. There were also some muddy vegetal notes that reminded me of both damp grass and cattail shoots. The later infusions surprisingly introduced a hint of marshmallow, but were otherwise mostly dominated by notes of cedar, cream, damp grass, toasted grain, butter, and minerals that were chased by subtler impressions of cattail shoots and watercress.

Not a terrible tea, but also showcasing a rather muddled and awkward combination of aromas and flavors, this was not one of my favorite traditional Tieguanyins of 2016 or 2017. That being said, I can see why some people flipped over it. It was challenging and complex, yet never came close to being overwhelming. The roast was also very artfully applied. It came across as restrained and subtle while creating some necessary contrasts with the tea’s more floral, fruity, and vegetal properties. Honestly, there wasn’t a ton wrong with this tea, and I’m likely being a bit hypercritical in my evaluation, but it just didn’t strike me as being quite on par with some of Verdant’s similar offerings.

I’ve recently been trying to taste similar teas together, to help me better appreciate their subtelties. Tonight, I brew two tieguanyin oolongs by Master Zhang. Both teas are brewed gongfu style in small quantities (2g each).

Steeping 1 (original tieguanyin) — Liquor has a nice fresh smell. Sip opens with savory base note, chestnut feels very plausible. After a moment, I notice a slight tingling on the tip of my tounge and a subtle liquorish flavor further back, especially when I exhale. Creamy texture. There’s a some floral/vegetal smell, but it isn’t really coming through when I actually taste the tea.

Steeping 1 (autumn tieguanyin) — I think I didn’t steep this long enough. It has a kind of generic light oolong taste: creamy texture and some floral notes. It’s quite nice, but not very special. Leaves have barely unfurled. None of the tangerine Verdant mentions. :/ Hopefully I’ll get some better luck on the next steeping.

Steeping 2 (original tieguanyin) — Floral and vegetal notes have come out more. I can just barely make out a liquorish flavor. Still a slight tingling at the tip of the tongue.

Steeping 3 (autumn tieguanyin) — Mostly generic light oolong. I can kind of taste a citrusy note, but it’s a bit of a stretch.

Conclusion — Both teas are very nice light oolongs, with original slightly darker than autumn. Original had some very unique notes on the first steep, but they seemed to fade pretty quickly. Autumn was more generic, but the characteristic creamy notes of light oolong were particularly emphasized.

I have great respect for Master Zhang. I’ve learned so much about oolongs from his work. And today, I didn’t just learn something, I experienced it. The first sip felt musical; I heard singing.

I enjoy floral tieguanyins, This one has floral notes, plus some distant ginseng (and that ginseng zip on the tongue). I wish I had the vocabulary to better convey this tea, which is the most sublime and beautiful tea I’ve ever tasted.