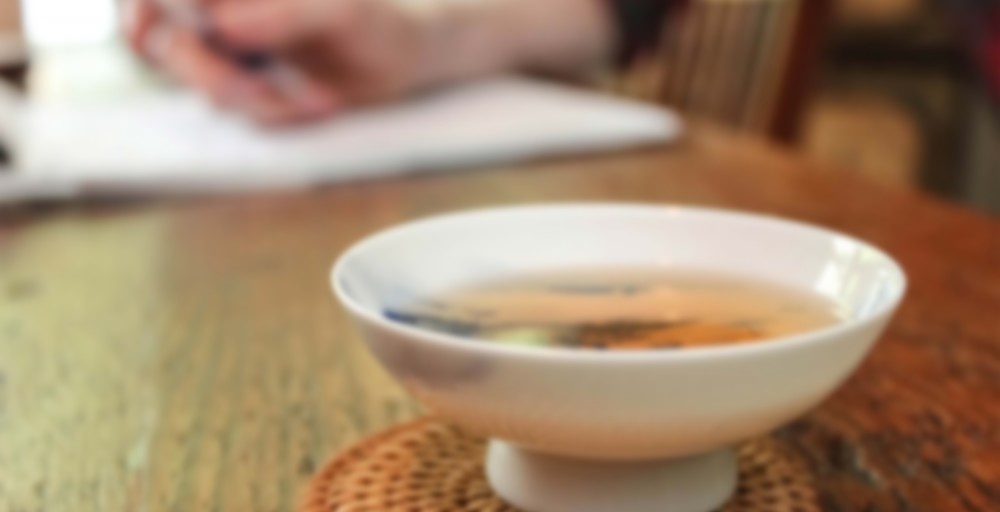 by Verdant Tea
72
You

While the Li Family often makes a point to stand against heavy roast processing when it takes away from the natural flavor of a varietal, they make an exception for Rou Gui. Because Rou Gui is so naturally spicy, a slow, careful and thorough charcoal roast brings out the spice and blends it with the minerality of the soil. This Rou Gui is the darkest roast Li Xiangxi offers and it shows off her family’s award-winning skill in their finishing.

I’m too tired to write about any flavours I tasted in this tea, but it is quite good. Rich-tasting and rounded, where other similar roasted oolongs sometimes develop a dry or flat taste.

Another one of those reviews I am not going to have a lot of time to write for. I imagine this is going to be a trend for a while, what with deadlines and all.

It tastes like nothing but roast. There might be a bit of hazelnut, but the flavor is mostly roasted almond skin. I can’t tell if this is because it’s not a good tea or if I just don’t have a palate for the roasted oolongs. I am guessing the former, based on the other reviewers.

Yeah, I didn’t care for this one either. I kind of doubt either scenario you presented above to be honest. For a medium roasted oolong, I found the roast to be nearly oppressive. It may just be that the roast was heavier than anticipated. Plus, I have had the light roast version of this tea and I found it to be pretty much excellent. It’s totally different. You can actually pick up the spice notes a lother more clearly. If you haven’t tried it, I would recommend it.

Verdant is pretty hit or miss for me, with hits mostly with the He family and misses being outside. You’re right that this was probably just not a good tea.

First tasting of the day is Rou Gui Medium roast and this is very nice, its has a very strong roasted flavor and scent. It practically pops from the cup. A nice sweet aftertaste follows , the aroma of caramel and wood.

I didnt get some of the subtler flavors mentioned in the tea description, there is a strong sweet, roasted and wood aroma’s and flavors, but I didnt pick up on the other flavors or aroma’s mentioned.

Its very nice though and easy drinking, a dark almost caramel liquor is produced, and it holds up to multiple steepings well. The caffeine level seems about moderate which is pretty normal for an oolong. The tea leaves are incredibly dark, almost reminiscent of a black tea.

I would recommend this tea, though I wish I had gotten some of the subtler flavors, maybe on the next tasting.

For me, if there is a roast to an oolong it is probably going to start off at like a 65 on this rating scale. It’s kind of like my brother in law and I say; Pizza pretty much automatically starts at a 5. Even bad pizza is still pizza.

Having said that, this is a fairly pedestrian medium roasted oolong. I mean, the charcoal roast flavor is there and it is pretty good. A little bit of mineral flavor there. But, as a whole, nothing popped out at me. Which is perfectly acceptable. Not every tea has to be or can be life changing.

I do wish it steeped for a bit longer though. Around the 4th steep, the flavor started to fall off. Still drinkable just kind of weak and the tea wasn’t that strong to start out with. Though, maybe I under-leafed it. I’ll play around with this some more and see what I can coax.

I was out yesterday and saw a sign in a store that said “You can’t please everyone. You aren’t pizza.”

I should have purchased it.

Of all the Wuyi oolong cultivars, it seems the one that I can never manage to muster much of a reaction to is Rou Gui. I think part of that is the fact that it is so common. At the moment, Rou Gui is an extremely popular cultivar both in China and abroad. Every vendor seems to offer at least one Rou Gui variant each year. The cultivar, itself, has become so popular that I have seen it referred to as “the fifth bush;” its popularity with tea drinkers apparently rivals that of Da Hong Pao, Shui Jin Gui, Tie Luohan, and Bai Ji Guan.

This particular Rou Gui is a product of Li Xiangxi, a tea farmer whose portfolio of offerings through Verdant Tea I really admire. Part of why I appreciate her work is that she tends to avoid the increasingly popular heavy roasts in order to let the natural aromas and flavors of the cultivars with which she works shine and to allow drinkers to appreciate the unique terroir from which her teas come. This particular tea seems to go against her processing philosophy. Though it is labeled as a medium roast tea, I found the roast to be quite heavy and overbearing. It obscured the natural spiciness of the Rou Gui cultivar.

Prior to the rinse, I noted that the dry tea leaves produced heavy aromas of char, smoke, and dark wood. There was also a hint of elderberry. After the rinse, an orchid-like floral aroma emerged, as did aromas of huckleberry and spice. The first infusion produced a similar aroma, though I was able to detect an earthiness and tobacco as well. In the mouth, heavy flavors of elderberry, dark wood, char, tobacco, and smoke mingled with more subtle notes of ginger, cinnamon, orchid, and huckleberry. Subsequent infusions began to draw out mineral notes, as well as aromas and flavors of caramel, raisin, black pepper, and clove. The later infusions displayed the expected Wuyi minerality both on the nose and in the mouth, though I could still detect fleeting impressions of caramel, char, smoke, raisin, tobacco, and wood with a hint of mild ginger, black pepper, and cinnamon spiciness.

This tea managed to be resilient, deep, and complex, though the overall aroma and flavor profiles were not much to my liking. I felt like the roast was too heavy, obscuring the spice, flower, and fruit notes of which I would have liked to see more. So, while there may have been a lot going on with this tea, it all seemed to be somewhat out of balance. Though I tend to admire Li Xiangxi’s work, I cannot help feeling that she lost the thread with this one. My search continues for a Rou Gui that really speaks to me. I think fans of heavier roasts may get some satisfaction out of this one, but it was not for me.

I’ve only tried a few rou gui now but none of them have really wowed me. I even tried an expensive one from a trusted source & it didnt have much strength or staying power, and came across confused as to what it was trying to put across.. so for me as well, the quest continues

Rasseru, sometimes I get the impression that aromas and flavors that go over in other parts of the world do not always translate well to Western noses and palates. It could be an individual thing too, so who knows? Everything I have read about Rou Gui suggests that it has become one of the most popular oolongs in China, but I’ve tried several, and so far none of them have done it for me. As a matter of fact, none of them have even come close. I have the light roast version of this tea in my cabinet. I think I’ll bump it up in the rotation and work on it next week. Since my biggest issue with this particular tea was the heaviness of the roast, I am hoping that I will like the other version more.

‘not even close’ – yeah thats how i feel. Maybe you are right, and I am expecting cinnamon powder, but I should be expecting actual cassia bark/trees and that smells different…?

The couple i have, will have to try again, they had a medium roast but as I recall, limited staying power.

Just out of curiosity, which other Rou Gui have you tried? All of the ones I have tried in the past year or so have been from Verdant. I started to order a spring 2016 Rou Gui from Yunnan Sourcing, but ended up nabbing a Dan Cong, a Shui Jin Gui, and a Da Hong Pao instead. I figured it made more sense for me to buy things I am likely to enjoy.

actually I just checked and the expensive one wasnt a Rou Gui, my mistake. My others have been from either YS or somewhere else I cant remember – i got given a free sample as well, i’ll have to have a think.

it has a roast/sweet/fruit/cinnamon/wood(rooibos?)/(hints of chocolate?) taste.

The roast isnt too strong, nothing like a strong DHP or Shui Xian. You might like it, i dont know – but i’m one of those people that doesnt like chocolate & fruit, so i think thats why I dont go for it?

It is a nice tea, just i dont think to my taste